Russia and the Baltics: Hard Choices – Finland and NATO 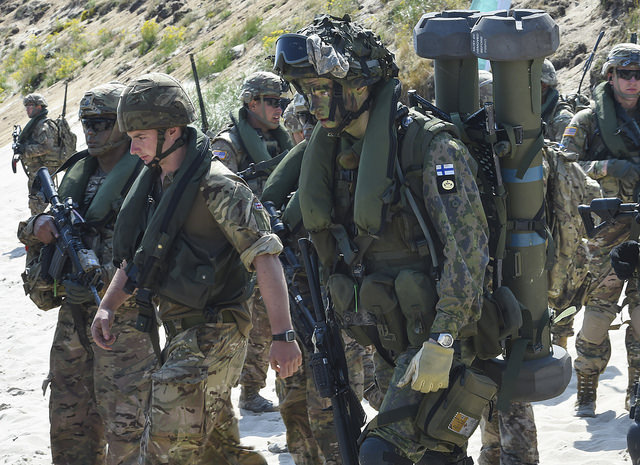 “Finland should think of the consequences, if it ponders joining NATO. It must ask, could joining [NATO] start World War III?”[i]. These comments did not come from an armchair pundit or a discussion question from a Political Science class on realism. These comments came directly from Sergei Markov, a senior advisor to Putin in what seems to be part of an often-used tactic of the regime of signalling more belligerent intentions through the use of informal spokespersons. Finland and Sweden (both neutral states) began openly considering NATO membership last year following a number of Russian incursions on their airspace and territorial waters that turned into an underwater game of cat and mouse with a Russian submarine on the Swedish coast.

Finland has claimed five increasingly aggressive violations of airspace by Russian military aircraft, including the disabling of beacons intended to prevent mid-air collisions and firing flares[ii]. Russian activity was also suspected to have led to the Finnish Navy dropping depth charges near ports in what seems to be a similar situation to last year’s Swedish hunt for a Russian submarine. Russia’s increasing assertiveness in the region is backed-up by a series of reorganization and modernization efforts that amount to a military buildup around the Baltics. This is particularly true for Finland which shares a thousand-kilometer-long border with Russia. Unlike other Baltic countries, Finland is also under pressure from a new Russian Joint Strategic Command North. In its most visible form, it has meant the creation of a new Brigade of Russian Special Forces (otherwise known as the renowned SPETZNAZ) for the Arctic, located only 50 kilometres from the Finnish border[iii]. In broader terms, Russia’s new arctic focus has meant the expansion and creation of ten arctic search-and-rescue stations and sixteen deepwater ports which expand naval control and “permit the use of larger and more modern bombers”[iv] – according to Russia Expert Mark Galeotti. Finland has stepped-up military cooperation with its neighbours in response through participation in the NATO BALTOPS exercises and a series of cooperation reports on aimed at pooling resources with Sweden

Amid all the talk of military buildups, it is easy to overlook the degree of economic interdependence between Russia and Finland. Before Finland complied with EU sanctions on Russia in response to its activities in Ukraine, Russia had been one of the key markets for Finnish exports[v]. Following the loss of key export markets, many products have been sold at half their regular price with one cheese previously favoured by Russian consumers now having the nickname of ‘Putin’s Cheese’[vi]. While much of Europe continues to be heavily reliant on Russian energy imports, Finland is especially vulnerable to any changes in supply as Russian imports represent 71% of its oil, 66% of its coal and 100% of its gas sources[vii].

As the economic ties show, the image of military posturing does not fully encapsulate the Russian-Finnish Relationship. Finland, like Estonia, has been at the forefront of the information-technology-driven knowledge economy and has been heavily reliant on modern digital infrastructure. There have been indications that Finnish journalists covering what they term ‘Russia’s information war’ have been subject not only to ‘trolling’ but also to a series of Botnet cyber-attacks[viii]. Finnish journalists and researchers have paid closer attention than most to Russia’s new media strategy; beyond simply the 50% increase in its international broadcaster RT budget to 270 million Euros[ix]. A researcher for the Finnish Ministry of Defence published the book Infosota which took an in-depth look into the use of paid trolls and bloggers to spread anti-western and pro-Russian comments across the web[x]. The use of these subversive rather than overt aggressions fits in with a number of analyses by security researchers including the consultancy ISH which judges that “with a military offensive unlikely, IHS expects Russia to retaliate through provocative arms buildups and economic coercion in the form of import bans, arbitrary taxation, and inspections against Finnish and Swedish businesses.”[xi] Finland is not vulnerable to the same tactics of subversion as Estonia, as it does not have a significant Russian speaking minority. There are fears in Estonia that Russia might like in Georgia in 2008 use ‘passport politics’ by giving residents of separatist areas Russian passports and militarily intervening under the justification that it is protecting Russian nationals[xii].

Sweden’s situation closely matches that of Finland. Both are nominally neutral, have small but modern militaries, are in the EU, and have seen increased Russian incursions into their airspace and waters. Sweden has begun exploring stronger partnerships with NATO, including NATO’s expeditionary force which would be deployed in response to Russian provocations in the alliance’s vulnerable Baltic members. Sweden has deepened military ties with Poland, which is NATO’s military heavyweight in the region and has been one of the strongest advocates for a robust response to Russian provocations. Sweden is in many senses fully aligned with the western alliance, through cooperation with NATO but also as member state of the EU; however, these ties are not bound by a collective security treaty like NATO’s article 5. Public opinion has shifted in recent years as a number of Sweden’s political parties including the Centre Party and Christian Democrats have backed NATO membership. While public opinion is still divided on NATO membership, a recent survey showed majority support for joining with 48% of voters in favour and 35% opposed.[xiii] As stated by the Foreign Ministry “Swedish membership in NATO would have politico-military and foreign policy consequences, and would require retaliatory measures from Russia”.[xiv] Sweden, like Finland is weighing the choice of NATO membership and closer integration with NATO against the escalatory nature of ascension.

Finland’s moves towards closer cooperation with NATO have been a response to both strategic and domestic pressures. Journalists and analysts have stressed the infectivity of the continued policy of active neutrality termed ‘Finlandisation’ in the context of a diminished Finnish military. “Nostalgia for the days of Finlandisation and the re-interpreted retro importance of the Paasikivi-Kekkonen policy line are just props that are used to avoid real decision-making”.[xv] Public opinion is mixed on the issue of NATO membership but by and large in opposed with 60% against full NATO membership[xvi]. Finnish government officials, including then Foreign Minister Tuomioja, have repeatedly stressed the importance of not antagonising Russia.

“The border between Finland and Russia is one of the most stable and calm in the world, there are no problems there. Russia thinks the same. And there are no reasons for Russia to want any problems there [in the border area]. However, NATO’s presence at this border may have such effect. I personally do not think that NATO plans to attack [Russia], but such an opinion exists in Russia, and we should take it into account. We don’t want any difficulties,”[xvii]

The government is seriously exploring NATO membership with the creation of a committee specifically for examining the implications[xviii]. This committee is likely to look at a not only the external threats discussed in western media but the more day-to-day problems of sanctions that Finland is applying against Russia. EU membership has not only tied Finland into maintaining economic sanctions on Russia but also into a more loose collective security agreement with other EU states under the provision of the Lisbon Treaty’s article 42.7 ‘mutual defence clause’. This is part of a wider EU move toward closer military cooperation including the creation of EU battle groups, but remains untested and ill-defined compared to NATO’s article 5 which interprets an attack on one member state as an attack on all.

At first glance, Finland and Estonia face the same situation of Russian assertiveness of threatening military incursions, cyber attacks on civil society, and ominous signals from Russian leadership. Yet upon closer inspection, it is clear that both countries are in different positions. Most importantly, the vulnerabilities they have to contend with are almost antipodal. Estonia’s sometimes fractious relationship with its Russian speaking minority exposes it to unconventional forms of subversion comparable to Ukraine but it has the ‘caste-iron’ security guarantee provided by NATO membership. Finland has less domestic splits to contend with and has been independent from Moscow for over almost a hundred years, however because of it’s longstanding policy of neutrality, cannot rely upon explicit protection from a world-class military alliance. Grappling with the choice of added security from NATO membership and avoiding confrontation with Russia has led the most common result of hard choices in policy: taking the middle-road. Finland has opted to signal interest in stronger NATO partnership without joining while at the same time deepening security ties with Nordic countries through a joint declaration stating clearly that they “must be prepared to face possible crises or incidents”.[xix]