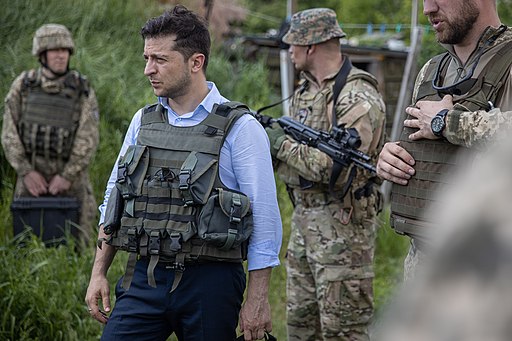 As the shadow of another Russian invasion looms over eastern Ukraine, Ukraine’s everyman president, Volodymyr Zelenksy, has been forced out of his political comfort zone and into a stronger pro-Western stance that could jeopardize his broad appeal. At the end of March, the Russian military initiated a large build-up of troops and armaments along the Ukrainian border. The Russians have had a covert military presence in Ukraine’s breakaway Donetsk and Luhansk oblasts since the Donbas conflict began in 2014. This time around, however, observers feared that a broken ceasefire between the Ukrainian military and pro-Russian separatists in the Donbas would prompt another, more conspicuous Russian invasion. The Ukrainians responded to the build-up by reinforcing their border with an army that has grown substantially since 2014. After weeks of a near panic state in Ukraine, Russian Defence Minister Sergei Shoigu announced on April 22 that they would begin withdrawing troops from the border. Despite the public de-escalation, Ukrainians remain fearful of a possible invasion due to the continued presence of Russian artillery and armaments along with the large portion of Russian troops that have not been sent home. Nevertheless, the news comes as a much-needed PR win for Zelensky after a year of waning popularity.

As a former comedian and actor, Zelensky’s rise to power was bizarre, even by the standards of Ukrainian politics. Zelensky portrayed the President of Ukraine on the political satire series “Servant of the People” before launching his Servant of the People party in time for the 2019 election. During the campaign, Zelensky’s background as the “Ukrainian Jon Stewart” meshed well with his focus on ending corruption and challenging Ukraine’s oligopoly. Zelensky’s unique style of digital campaigning built off his already large media presence and appealed to the country’s disaffected young voters. Zelensky subsequently crushed incumbent President Petro Poroshenko by taking 72 per cent of the vote in the presidential runoff. Six months later, the Servant of the People Party put forth a full slate of candidates in the parliamentary elections and won 254 out of 450 seats to form the country’s first-ever democratically elected single-party government.

Crucially, Zelenksy and his party found support from young people and those disillusioned with politics on both sides of the country’s east-west divide. Since independence, Ukrainian politics have revolved around a linguistic and cultural divide where Ukrainian-speaking Westerners favour closer ties with Europe and NATO. Russian-speaking Easterners welcome influence from Moscow. Poroshenko and his European Solidarity party governed on behalf of western Ukrainian interests with the explicit goals of joining the EU and NATO and ending the use of the Russian language. By contrast, Zelensky positioned himself somewhere in the middle of the east-west divide by focusing on reforming the economy and democracy, despite his Russian-speaking background. Though Poroshenko attempted to paint Zelensky as weak and obsequious to Putin, the attacks did not stick in a year when the Donbas conflict was out of the headlines.

Predictably, Poroshenko’s only area of majority support in 2019 was in the staunchly pro-European Lviv Oblast, whereas Zelensky saw his highest margins of victory in the Russian-speaking southeast. Zelensky’s popularity remained high throughout 2019 as his new regime showed a genuine commitment to the reforms they campaigned on. Ukraine’s economy grew by 3.5 per cent while the Servant of the People parliament passed new anti-corruption legislation. Zelensky’s popularity peaked in 2019 following a summit with Putin in which he negotiated a large POW swap.

After two years in power, a lack of ideological consistency damaged Zelensky’s and his party’s reputations. Zelensky’s polling averages have collapsed by 15 per cent in the past year, while Poroshenko has seen a major spike since the troop build-up on the Eastern border. Zelensky faced criticism for providing his decentralization policy that would allow national parties to replace local politicians who strayed from the party line. The policy was considered a sneaky way of centralizing his power over local Servant of the People politicians, though the reforms were allegedly meant to do the opposite. Ukraine’s economy was also particularly devastated by COVID-19 due to its reliance on migrant work and remittances. In turn, Zelensky’s commitment to anti-corruption reform came into question after replacing several of the more reform-oriented and pro-Western members of his cabinet with pro-Russian oligarchs. Likewise, Zelensky is rumoured to be operating under the thumb of Ukrainian billionaire Ihor Kolomoisky, who owns the TV station he once starred on. Finally, Zelensky has publicly backtracked on his promises that he would only serve one term as president, further damaging his outsider reputation. Beyond a slide in polling numbers, Zelensky paid for his political miscalculations at the 2020 Ukrainian local and mayoral elections, where Servant of the People was wiped out by local parties who positioned themselves more clearly on either side of the country’s east-west divide.

Zelensky’s centrist position on the east-west divide is both his greatest strength and greatest weakness. It won him support from both sides of the country in an election where he could transcend the language divide and instead focus on an anti-corruption platform that promised to expand government budgets in every region of the country. However, as the Russian threat has reemerged, he has been forced to embrace Western allies and risk alienating Eastern Ukraine. Before him, two Ukrainian presidents, Viktor Yanukovich and Petro Poroshenko, both held obvious pro-Russian and pro-European views, respectively. Zelensky, however, has approached Russian-Ukrainian relations somewhere in the middle. At times, Zelensky appeared just as pro-European as Poroshenko, such as when he banned pro-Russian media outlets from television or enacted a new free trade deal with the UK. In other moments, Zelensky has been willing to work with the Russians, as was the case when he allied with the pro-Russian Opposition For Life party in parliament and when he agreed to a provision of the 2014 Donbas ceasefire that would allow the breakaway republics of Donetsk and Luhansk to vote on secession.

Nevertheless, since the upsurge of violence in the Donbas, Zelensky has leaned to the West by pushing for an expedited path into NATO and inviting American Secretary of State Anthony Blinken to Kiev to discuss possible military aid. This decision will alienate the Russian-speaking Ukrainians who made up much of his 2019 base and gravitated towards pro-Russian parties in the 2020 local elections. Zelensky’s election in 2019 represented a unique moment of regional solidarity in Ukrainian politics that now looks to be coming to an end. Russia’s decision to recall some of their troops from the Ukrainian border will likely boost Zelensky and Servant of the People in the polls. Still, it remains to be seen if the reignition of the Donbas conflict will destroy the spirit of east-west unity that Zelensky once represented in Ukrainian politics.

Featured image: Zelenksy visits the frontlines of the Donbass conflict. Volodymyr Zelensky visits frontline 27-05-2019 by The Presidential Administration of Ukraine is licensed under CC BY 4.0