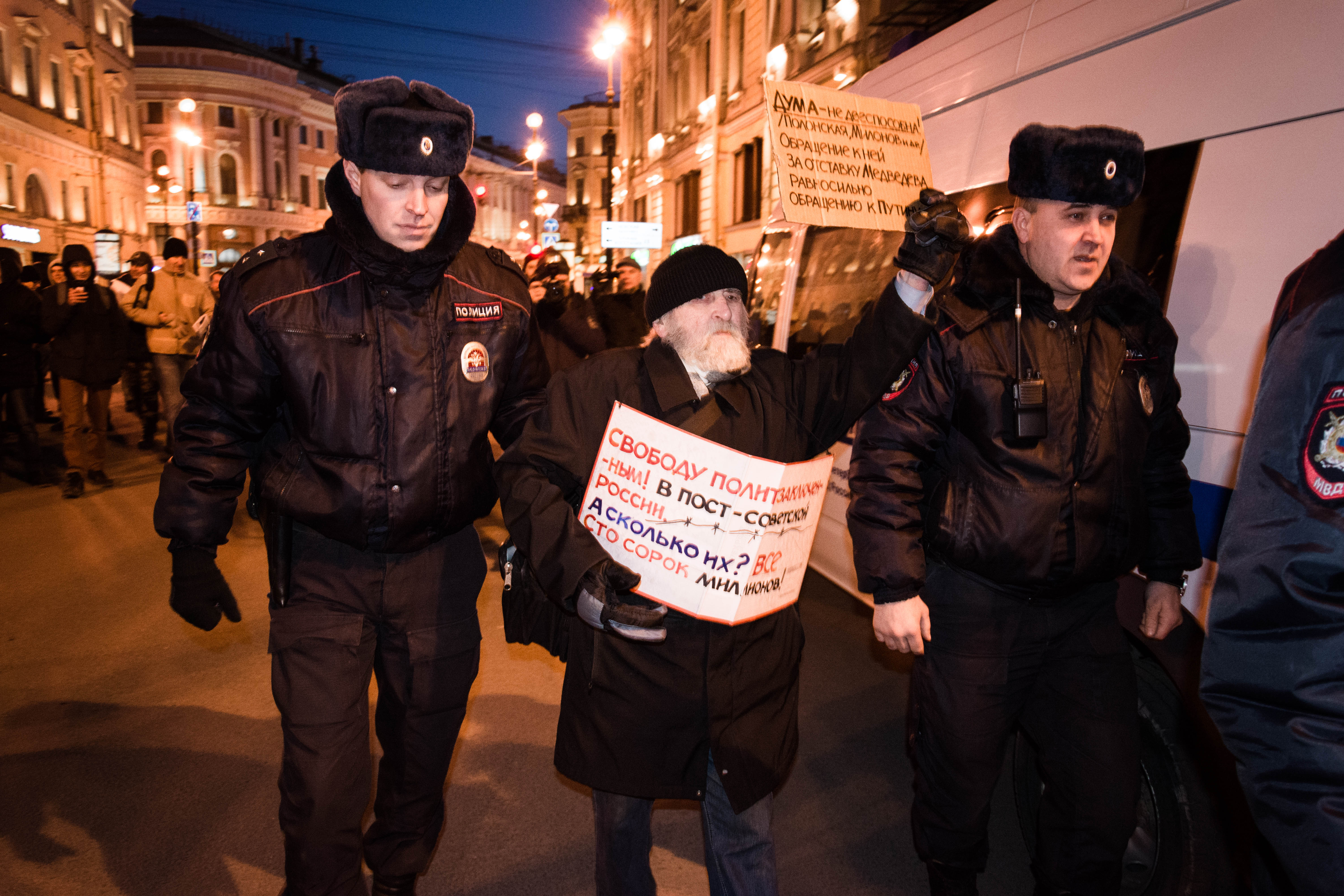 While Russian meddling in the 2016 U.S. presidential election continues to dominate American politics, Russian leader Vladimir Putin is dealing with his own domestic troubles. In March and June thousands took to the streets in more than 100 Russian cities in anti-corruption protests . It is difficult to avoid comparisons between recent protests and protests against electoral fraud in parliamentary elections that took place in 2011-2012. In both instances, opposition was underpinned by widespread economic discontent. Far from yielding to calls for freer and fairer elections, the Kremlin cracked down on popular dissent in 2012 and enacted legislation that further insulated the government from threat. Despite depressed oil prices and a western-sanctions regime, Putin has since continued to consolidate power, albeit on a system of informal governance and patronage networks.

With oil prices increasing and the Russian economy somewhat recovering from 2014-levels, it is unlikely that protests will result in a real challenge to the political status quo. The new protests do, however, represent a strategic shift among the activist community compared to 2011 and 2012. Protests then focused more specifically on Putin’s role in fraud and political misconduct. Today there is broader mobilization around anti-corruption that strikes at a central dilemma for the Russian government – while Putin has consolidated power based on a system that channels state incomes towards those close to him, the Russian economy continues to suffer from a risky business climate due to the nature of state intervention the economy. Besides state funds going towards privately owned assets, the economy is characterized by overregulation or regulations that are unenforceable. These make it easier for businesses looped into patronage networks to succeed and harder for foreign firms to compete effectively. To revive the economy to pre-2014 levels, Russia must attract greater levels foreign direct investment by decreasing the business risks associated with investing in a corrupt system that is designed to reward loyalists. Putin may not be politically challenged by recent protests, but there’s a possibility that protests will serve as an impetus to tackle corruption where it impacts economic growth.

In March, protestors took to the streets after lawyer and activist Alexander Navalny released a video on his YouTube page that accused Russian Prime Minister Dmitry Medvedev of corruption and revealed his material empire worth an estimated one billion USD. The video and more details about Medvedev’s activities can be viewed on the Foundation’s website. Medvedev and the Kremlin have denied the accusations.

Navalny was involved in the 2012 protests and has become the most distinct face of opposition leadership in the 2017 protests. In 2013 he ran in the Moscow mayoral election, garnering more support than the Kremlin anticipated. In early 2017 he announced his intention to run against Putin in the 2018 presidential elections. Russian courts recently banned him from running by reviving an out-dated criminal conviction against him and he is currently spending 30 days in jail on charges of organizing illegal protests

That this year’s protests drew even more participants than in 2011 and 2012 testifies to Navalny’s skill as an organizer and the fact that the anti-corruption message of the protests does not attack Putin directly. While Kremlin-controlled television stations chose not to report on protests in June, YouTube, twitter, and other independent media sites have kept the conversation going online. As The Atlantic‘s Julia Ioffe points out, the millions who visit Navalny’s webpage are not all necessarily supporters, but the web traffic does illustrate that it is possible to have dialogue beyond state control.

The 2017 protests also galvanized more support because the official message centers on a more universal set of grievances. It is significant that Navalny’s message does not target Putin specifically. Masha Gessen, an activist and expert in Russian politics, comments that Navalny’s message is primarily about good governance: “he doesn’t speak out against the war in Ukraine. He doesn’t speak out against the political crackdown as such. He doesn’t speak out in defense of democracy.” This is an important strategic shift, with activists focusing on those around Putin, such as Medvedev, as opposed to the president himself. By going after the inner circle, the campaign attacks the wider system of corruption and patronage. Russians are well aware of the chaos that bottom-up political revolution can bring, thus framing protest in terms of general economic grievances instead of a targeted anti-regime campaign has more traction, writes Yana Gorokhovskaia for Eurasianet.

Not only do calls for good governance attract more supporters, it is also an objective that has more overlap with Kremlin prerogatives. Currently, the overbearing role of the corrupt state has a negative impact on the Russian economy. A revealing case is the short life of Russia’s own Silicon Valley, Skolkovo, a tech start-up neighbourhood outside of Moscow intended to attract investors and venture capitalists. Skolkovo began with strong support from then President Dmitry Medvedev in 2009 and early investors included Microsoft, Nokia and Samsung. Despite initial promise, the business climate chilled after anti-corruption agents raided Skolkovo in 2013 and the founder of Skolkovo, Ilya Ponomarev, was exiled on charges of corruption. Ponomarev, who was also a Duma MP and outspoken critic of the annexation of Crimea, considers the raid and his exile politically motivated, spurred in part by Putin’s distrust of western partnership and desire to control digital development. Investors also feared that successful growth will make the Skolkovo’s businesses targets of government appropriation, such as what took place in the 2004 Yukos Affair. Besides these reasons, investors scaled back their involvement in their project in response to the geopolitical risk posed by the Russia’s involvement in the conflict in Ukraine. Efforts to diversify the Russian economy and create growth were curtailed by the governments both direct and indirect impact on the business climate.

Lack of foreign investment continues to plague the Russian economy. A recent report from the Carnegie Moscow Center explains that in addition to over-reliance on oil, Russia lacks sufficient fixed capital investment and the production capacity to create marketable and competitive products. The state lacks the funds to boost the economy by capitalizing production and building new capacity, and private investors do not invest in Russia because the business climate is considered too risky. Business creation is also diverted by a weak and underdeveloped banking sector. The World Bank’s Ease of Doing Business ranking places Russia at 40, well behind other developed economies with similar geopolitical significance. Russia has demonstrated desire for and commitment to increasing foreign direct investment, particularly in Russia’s Far East. While Russian officials have touted a successful pivot to Asia, foreign direct investment into the eastern regions has come primarily from Russian-controlled offshore hubs. These hubs allow capital controlled by Russian firms to be integrated into global capital markets but also channelled back into Russia, creating the illusion of foreign investor support.

Demonstrating that the message of the opposition has common ground with the Kremlin’s desire for a revived economy does not mean that Putin will make concessions to activists such as Alexander Navalny. In fact, the chances of Navalny being silenced or exiled like Boris Nemstov or Ilya Ponomarev are high. Compared to the message of protests in 2011 and 2012, however, the strategy of the opposition sets forth goals that have a greater chance of being realized within Putin’s government. President Putin has consolidated power based on a corrupt system, but he cannot truly grow the economy without addressing the endemic risks associated with doing business in Russia. The benefits of better governance and rule of law go both ways.