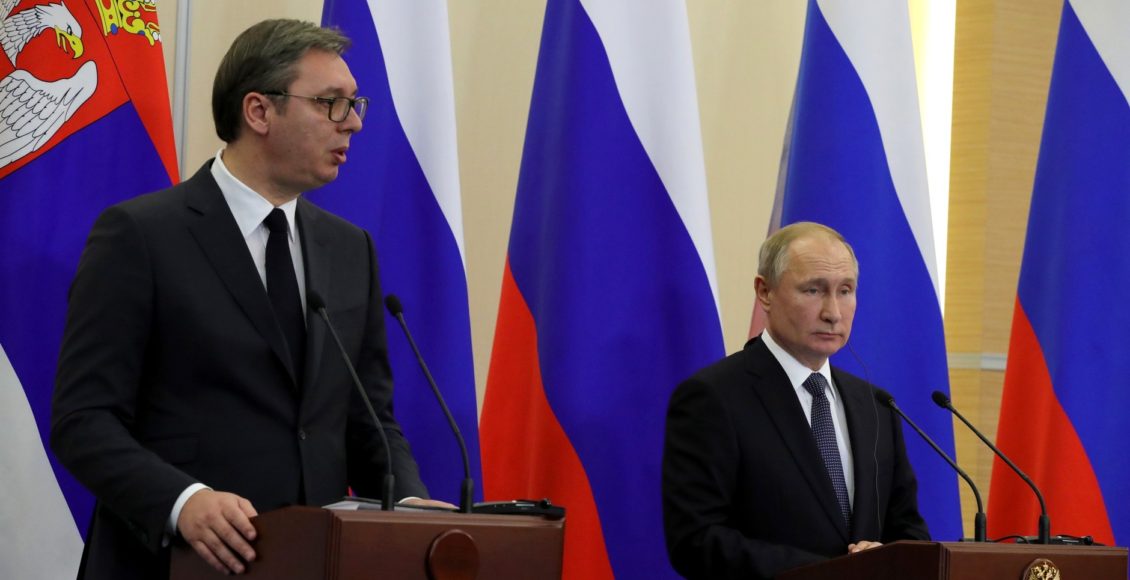 On September 30th, the Kremlin issued orders for the beginning of Russia’s ongoing military intervention in Syria. Since then, Russian planes have carried out 934 outings and destroyed 819 targets in the process. As Russia proceeds to take a stand on the old Soviet stomping grounds, it becomes apparent that the push for former glory is now more evident than ever. Vladimir Putin’s actions in Syria flood Western headlines with more exuberance than Tom Brady’s deflategate.

With all attention focused on brinksmanship in the Middle East, the world has forgotten the much closer European frontier which has now spread from Ukraine into the heart of South-Eastern Europe. Many disregard the no man’s land created in the Balkans where Serbia, Montenegro, Bosnia-Herzegovina, Kosovo, and Macedonia do not belong to either bloc. As Serbia and Montenegro make strides towards European and Euro-Atlantic integration, the presence of Moscow’s invisible hand grows tenfold.

Demonstrators lunge at police cordons with molotov cocktails and baseball bats as tear gas shoots through air from the direction of Parliament. These are not scenes from Kiev’s Maidan, but Podgorica’s Trg Slobode (Freedom Square). Mass protests broke out in the usually quiet Adriatic republic on the night of Saturday, October 24th. In Montenegro there are many reasons for the protests including freedom of the media, the politicization of the judiciary and public administration, and widespread corruption. Montenegro perfectly meets political requirements to fully harmonize attitudes in foreign policy with those of the EU and other Western partners. Podgorica’s harmonizing views are best embodied by their sanctions on Russia despite the fact that Russian citizens have been the largest investors in the Montenegrin economy since Montenegro achieved independence. Unfortunately, Montenegro falls short with respect to conditions concerning genuine reform and concrete results in the fight against corruption, nepotism, and organized crime.

Nevertheless, all NATO members can agree that Montenegro has reached the requirements for membership. As a result, it is likely that Montenegro will receive an invitation to join the alliance by NATO’s next summit in July 2016. Yet in the past three weeks, mass protests in the nation’s capital of Podgorica have escalated from peaceful political rallies led by the opposition party Democratic Front to violent clashes between divergent groups and the police over Montenegro’s Euro-Atlantic path. Thousands hit the streets holding baseball bats and brass knuckles among the sea of Russian and Serbian flags calling for a “return home” to Orthodoxy.

From these events, it is clear the cleavage in Montenegro lies in an East-West divide which is, according to President Milo Đukanović and the Montenegrin Minister of Interior Raško Konjević, being both encouraged and funded from behind the Kremlin walls. At the same time the aftermentioned comments were made, Russian Foreign Minister Sergei Lavrov issued a press release stating “rushing into NATO accession” was “presupposing any alternative and viable democratic options” within Montenegro. It could be argued that Đukanović’s 20-year reign as president does not support the ideal of freedom of speech and opinion in Montenegro. Recent official polls had the anti-NATO option at 42% that may suggest genuine sentiments within the country for NATO accession. However, the increased presence of Russian symbols at rallies point out a new direction on the Montenegrin scene that does not fit the previous mold.

While Podgorica is engulfed with unfathomable violence along political lines, Belgrade seems happily unified in playing a dangerous game of non-alignment. Earlier this year, Serbia opened their first chapters for EU membership following the European Council’s decision to ratify their candidate status in December 2013. An area of contention has and will always be the recognition of Kosovo which Serbia is not willing to officially acknowledge. Unofficially, however, it seems Belgrade has given up on its long lost territory. The issue is of such tension that politicians fear even to discuss the matter; it should not be surprising that the President of Serbia’s Academy of Science and Arts, Vladimir Kostić, was replaced for stating that “Kosovo does not belong to Serbia de facto and de jure”. As Serbia continues with dreams of European integration in mind, it does not forget the centennial love for Mother Russia. The same mother who, upon Serbian President Aleksander Vučić’s visit to Moscow, recently pledged to remount 4 outdated MIG-29’s and 10 MIG-20’s in addition to selling several state-of-the-art Mi-17’s and Mi-171 helicopters at a “discounted” price. What should stand out to most as a precautionary measure is the context in which this procurement occurred. Upon his stay, President Vučić did not miss an opportunity to take a shot across NATO’s bow saying, “We are following what’s happening in the region and will not allow military imbalance.” When asked about the purpose of the aforementioned helicopters, the President simply replied, “Ask our neighbours.” Vučić can consider this a gift for his loyalty to Vladimir Putin who has also agreed to invest in expanding Serbia’s energy capacity to ensure self-sufficiency. The strengthening of ties comes after Serbia declined to participate in the implementation of EU sanctions following the annexation of Crimea and ongoing stalemate in Donbas which has claimed the lives of over 8,000 people. “We have proven our sincere and friendly attitude to Russia by being one of the European countries that refused to impose sanctions on Russia,” said Vučić after meeting with Medvedev in Moscow last weekend. In return, Russia has increased food imports from Serbia even as it has banned food imports from European countries that adhere to the sanctions. Food imports from Serbia increased by 40 percent in the first half of this year, Medvedev told reporters. Serbia proceeds to sit on a fence between the east and west, much like former Yugoslav leader Josip Broz Tito managed during the Cold War, and will be able to continue to do so as long as there is a scramble for spheres of influence between Moscow and the West.

Protests in Montenegro will endure, Serbia’s military prowess will progress, and Putin will happily dump petro-roubles into the economies of every non-aligned state in the region. The convoluted truth of foreign affairs in the Balkans is much more complex than what meets the eye. There are several socio-historical factors that must be taken into consideration when understanding relations between Belgrade, Podgorica, and Moscow. That said, Russia is persistent in expanding their sphere of influence deeper into new echelons of the international community. Europe’s sick man is adamant on making one last push for every parcel left on the market. Last year it was Ukraine, this month it is Syria. Next week, the world might, yet again, find itself in contention over the Balkans.

Featured image courtesy of the Kremlin.