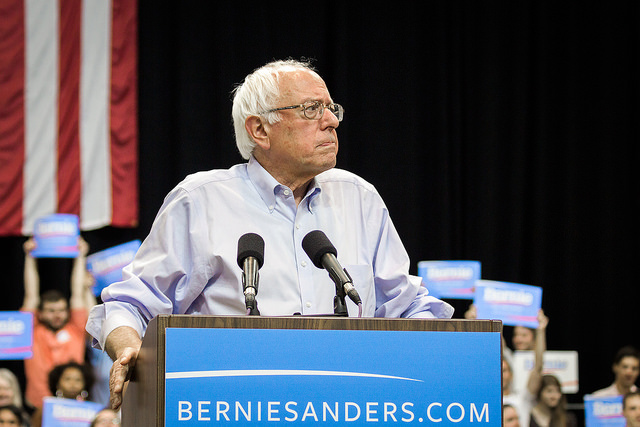 After suffering a loss in New York, Sanders now has to look to California and the few remaining Eastern states to make up his delegate deficit.
Share

During the Democratic Presidential Primary debate on April 14th, Bernie Sanders expressed support for the Palestinian people, arguing that “there will never be peace in that region, unless the United States plays an even-handed role.” He advocated greater diplomatic undertakings in the Middle East that listened to both sides of the conflict, instead of taking sides and laying blame. His opponent, Hillary Clinton, held a different view, saying that US engagement in the Middle East should be undertaken “without ever undermining Israel’s security.” Sanders’ statements in support of the Palestinian people represent not only his firm grasp of American foreign policy, but his desire to pursue a more moderate approach on the world stage.

Though definitely not traditional, Sanders’ views are not without precedent. President Obama has not been on the best terms with Israeli Prime Minister Benjamin Netanyahu, who made a 40 minute speech to Congress regarding the US-Iran Nuclear Proliferation deal, which he strongly opposed. In light of his recent comments, it is likely that relations between the US and Israel would not improve if Sanders were to be elected president. Already, he is facing criticism from many fronts, including Alan Dershowitz, a Law professor at Harvard, for criticizing Israel’s use of force to protect its citizens. Dershowitz argues that this creates a double standard, as he points out that the US has pursued comparable tactics in the Middle East to protect its own interests.

However, Sanders’ insistence on finding a two-state solution, and working, as he put it, even-handedly with Palestinian and Israeli interests in mind, could usher in a new state of foreign relations in the Middle East.

And it is true that the atmosphere seems to be changing. For example, a current bill in Congress seeks to hold Saudi Arabia responsible for any role they may have had in the September 11 attacks in 2001. Saudi Arabia responded to these developments by threatening to sell off its American financial assets totalling $750 billion, a move which would have serious implications for the American economy.

In the wake of the aforementioned nuclear deal with Iran, Sanders’ outsider views on foreign policy may give him an edge in navigating the quickly-changing climate in the Middle East, or in bringing about that change. With relations having become cooler between the US and both Israel and Saudi Arabia, it is possible that new coalitions will be formed in the Middle East, with the US playing a more moderate role if Sanders is elected.

Sanders has long faced questions about his abilities in and knowledge of foreign policy, but his position on Israel represents a firm stance based on morality, and it is not the first such stance he has taken. He urged Congress to impose economic sanctions instead of invading Iraq during the First Gulf War in 1992, he voted against the Invasion of Iraq in 2002, and he opposed sending ground troops to combat ISIS in 2015. Sanders views the use of force as expensive and overused, and believes that military action, especially in the Middle East, can be counterproductive to American foreign policy goals if not used with care, stating that “the only mission President Bush […] accomplished was to destabilize an entire region, and create the environment for al-Qaeda and ISIS to flourish.”

Sanders’ foreign policy opinions and experience are at odds with his opponent’s. Hillary Clinton has faced accusations of politicizing foreign affairs for domestic political interests, namely in regards to the September 11, 2011 attacks in Benghazi. Clinton released a public statement attributing the attacks to the protests in response to the inflammatory Innocence of Muslims viral video. However, she described them as acts of terrorism in a personal email to her family, a fact which came out during her testimony on the attacks. Despite the criticism that she has faced, it is undeniable that she has experience, having served as Secretary of State under Obama during his first term (although it is important to note that the Iran nuclear deal was closed under her successor, John Kerry).

It seems that foreign policy, like almost every other issue in the Democratic primary, can be boiled

down to a conflict between the experience of the establishment and the idealism of the outsider.

Although Sanders’ website does not have a list of specific actions that he wishes to pursue overseas if he were to be elected, he has frequently underlined the fact that American lives and money should not be spent lightly. It is likely that if elected, Sanders would pursue a collaborative coalition-based approach that emphasizes diplomacy and multilateral agreements over the use of force adopted by his predecessors–the Obama administration has been characterized by its extensive drone programs in several Middle Eastern countries, and the Bush administration with the invasion of Iraq and the toppling of Saddam Hussein. Such an approach would limit unilateral American action in the Middle East and would allow the US to pursue a more supportive role in the region.

Of course, we may never see Sanders’ position tested. His loss in New York puts him on the back foot as we move into the tail end of primary season. Current polls show Hillary Clinton holding a sizeable lead in California, which Sanders would need to win in order to make up for his current delegate deficit. Nevertheless, it would be unwise to assume that he does not have a grasp on the necessary fundamentals of foreign policy. If anything, his statements and voting record show that he has built a position based on preventing conflict at all costs instead of using it as a tool for electoral games.