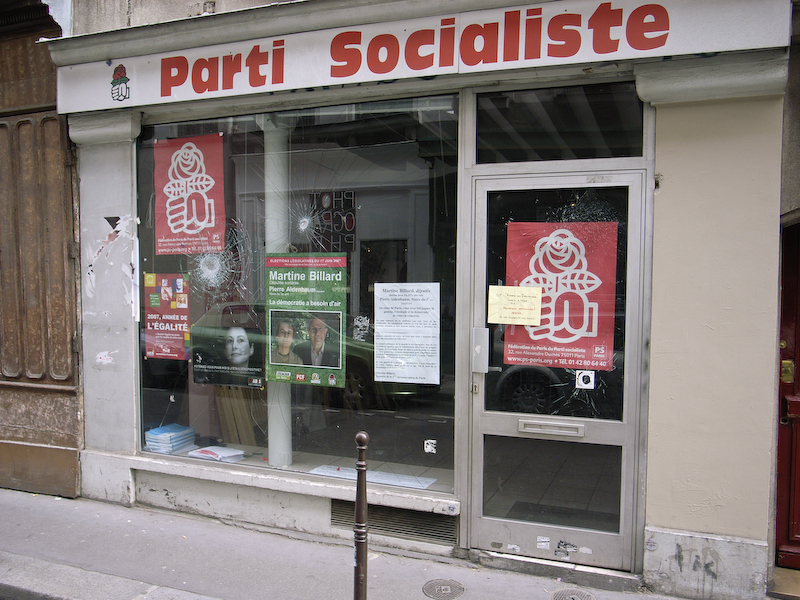 A kiosk of the French Socialist Party in 2007. Source: http://bit.ly/2haa0HX
Share

“Today, I am conscious of the risks that would arise from an approach, such as mine, that would not gather up to a great extent.” This is how François Hollande announced that he would not run for a second five-year term.

Who will then, among the French left, face François Fillon and Marine le Pen in the presidential race? As the end of the term draws to a close, Hollande’s tide of past followers are in conflict. Former Minister of Justice Christiane Taubira might apply for the primaries, and so might the former Minister of Economy, Industry and Digital Affairs, Emmanuel Macron. Meanwhile, Prime Minister Manuel Valls, who might also run, declares that the French left is “irreconcilable.”

While Taubira has not yet spoken about her possible candidacy, both Macron and Valls disapprove on the principle of Socialist primaries. “Even if these primaries would come by smoothly, the victor would not succeed. If Arnaud Montebourg [former Minister of Industrial Renewal] wins the primaries, do you think that Valls would support him? If Manuel Valls wins, do you think that the supporters of Arnaud Montebourg or of Benoît Hamon [former Minister of National Education] would follow him?” says Macron.

The French left is indeed torn to pieces. Gérard Courtois, political editorial writer at Le Monde, sums up the situation: “The entire left (…) weighs 35% today. We have announced: 2 Trotskyists, [one] ecologist, a left radical (…). The remains are argued over by Jean-Luc Mélenchon on the left, Emmanuel Macron in the centre and the Socialist Party in the middle of it all.” In this context, the Socialist primaries are just as likely to gather up the troops as they are to further divide them, especially now that on the other side of the political spectrum, François Fillon has been elected with a strong consensus. The only solution to this divide lies in the voters.

More generally, these leaders are right to fear such divisions. Is assembling a unified front still possible in modern democracies? The rift between left and right, and even within these entities (the radical left and extreme-right) keeps on widening. Democracy is still working, yet its voice has weakened if we judge by the staggering rate of abstention during the past elections or the permanent demonstrations in France.

No matter how it falls, these elections will not be a landslide for any of the candidates.