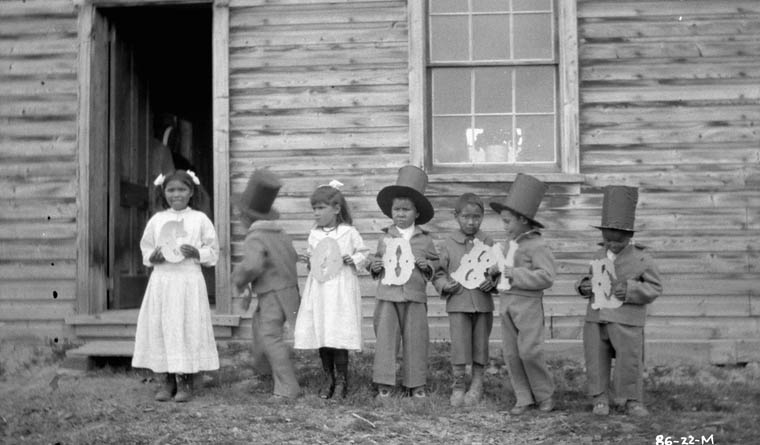 Indigenous children outside a residential school in the Northwest Territories in 1922. Source: https://flic.kr/p/SxsvJL
Share

In Attawapiskat, an Indigenous reserve in Northern Ontario, the Cree community spent more than a decade fighting for a right that most Canadians take for granted – a safe elementary school.  The reserve’s original school, J. R. Nakogee Elementary School, had been plagued with black mold, mice, and cracked walls. Most importantly, it stank of diesel fuel. The school was classified as a Level 1 Highly Sensitive Site, with petroleum pipelines beneath the school’s surface emitting toxic fumes that caused teachers and students to experience nausea and vomiting.  After the school was shut down in 2000, students were moved to portables until a new school finally opened in 2014. Fourteen years of delays in providing a basic enclosed school structure would be unthinkable among provincial public schools, yet conditions like these are a common reality for many of Canada’s indigenous youth.

The disparity between the quality of education received by indigenous youth living on-reserve and other Canadian youth in the provincial schooling system is shocking. The legacies of the residential schooling system are still prevalent in Canada’s 21st century discourse on educational funding – as the federal government fails to live up to its responsibility of ensuring every child’s education.

The residential schooling system had its foundations in the assumption that Indigenous peoples were intellectually inferior to Canadians of European descent. This core ‘deficit’ ideology led to the forced enrollment of over 150 000 indigenous youth in Catholic boarding schools with the intent to “take the Indian out of the child.” Up to 6,000 children died in overcrowded and unsanitary residential schools, with many survivors reporting atrocious incidents of sexual and physical abuse. Many of the issues faced by Indigenous communities in Canada today are rooted in the legacy of residential schooling system – from high poverty rates to the large numbers of Indigenous children in foster care.

Another distressing consequence of the residential schooling system is the permanence of the deficit ideology within Canadian institutions. The historical notion of Indigenous inferiority led to embedded systemic injustices that Indigenous peoples continue to face in 2018. For instance, both levels of Canadian government continue to condemn historical injustices while simultaneously under-funding on-reserve schools in comparison to provincial schools.

Over a ten year period, education funding for schools in provincial systems increased 45%, compared to a mere 19% for those on reserves. On-reserve schools are funded by the federal government, while the funding of most other schools falls under provincial jurisdiction. In 2016, former chief economist for TD Bank Don Drummond identified a 30% funding gap between provincial and on-reserve schools, meaning that “for every dollar a province would spend, the First Nations schools were only getting 70 cents.” The Canadian federal government has provided zero funding to on-reserve schools for renovations, libraries, computer training, data management systems, and other programs essential to student success. These failures are clear examples of structural violence – a system in which societal configurations disadvantage certain groups. This violence is physically manifested in Northern Ontario, as seen in the state of schools in Pikangikum and the aforementioned Attawapiskat First Nations.

Schools in Pikangikum First Nation have extremely limited facilities, with no central playing areas, libraries, gyms or cafeterias. Furthermore, the Eenchokay Birchstick School has faced two serious tragedies that have yet to be adequately dealt with. First, the school burned down in 2007. Despite ten years in which it could have been rebuilt, students still attend the majority of their classes in portable classrooms. Secondly, the 2011-2012 academic year was disrupted when a severe mold infestation in the teachers’ residences forced them out. With ten years of inadequate temporary classrooms and evidence of hazardous health conditions for teachers and students alike, the provincial government has yet to intervene. This indifference on the part of the government comes despite countless reports from as early as 2006 urging the construction of a new school.

A prominent component of Prime Minister Justin Trudeau’s 2015 election campaign was a pledge to invest $2.6 billion CAD in Indigenous education. More specifically, a key policy was the investment of $300 million in additional annual funding for the First Nations education system for kindergarten through grade 12 programs, and $500 million from 2015 to 2018 in the refurbishment of First Nations schools.

However, initial rollout was delayed as the Liberal Party discovered that funds committed by the former Stephen Harper government were quietly removed from the ledgers, in a bid to balance the budget prior to the 2015 federal election. This meant that a greater starting amount of funding needed to flow in from the Liberal government budget. Thus, while budgets published in 2016 and 2017 made significant strides towards bridging the federal funding gap, they ultimately fell short of promises.

Despite some disappointments, increases in funding under the Trudeau government have led to improvements for many on-reserve students. Since September 2016, as many as 1,970 indigenous children have started school in one of six new or renovated schools in First Nations communities across Canada. Furthermore, the recently released 2018 budget has indicated a promising path forward, with the commitment of $5 billion over 5 years to “mend the relationship between Indigenous peoples and the rest of Canada.” While this points to some improvement for Indigenous communities, there remains a lack of specificity pertaining to school facilities.

The 1990 United Nations Convention on the Rights of the Child affirms that all children have the right to an education. Canada was one of the first signatories on this convention, and the government must recognize its implication in denying this right when poor facilities and uneven funding block children from achieving their learning potential. A comfortable, functional and healthy school environment is a right for every Canadian child – regardless of background. While the Liberal government has recognized the shortcomings and pledged a “responsibility to do better and more” for Indigenous peoples, an uphill battle remains to ensure these funds are allocated in an effective and timely manner. Until on-reserve youth are consistently offered the same opportunities as their provincial peers, their educational capabilities remain inhibited by forces beyond their control.