Seeking Refuge in a Warming World 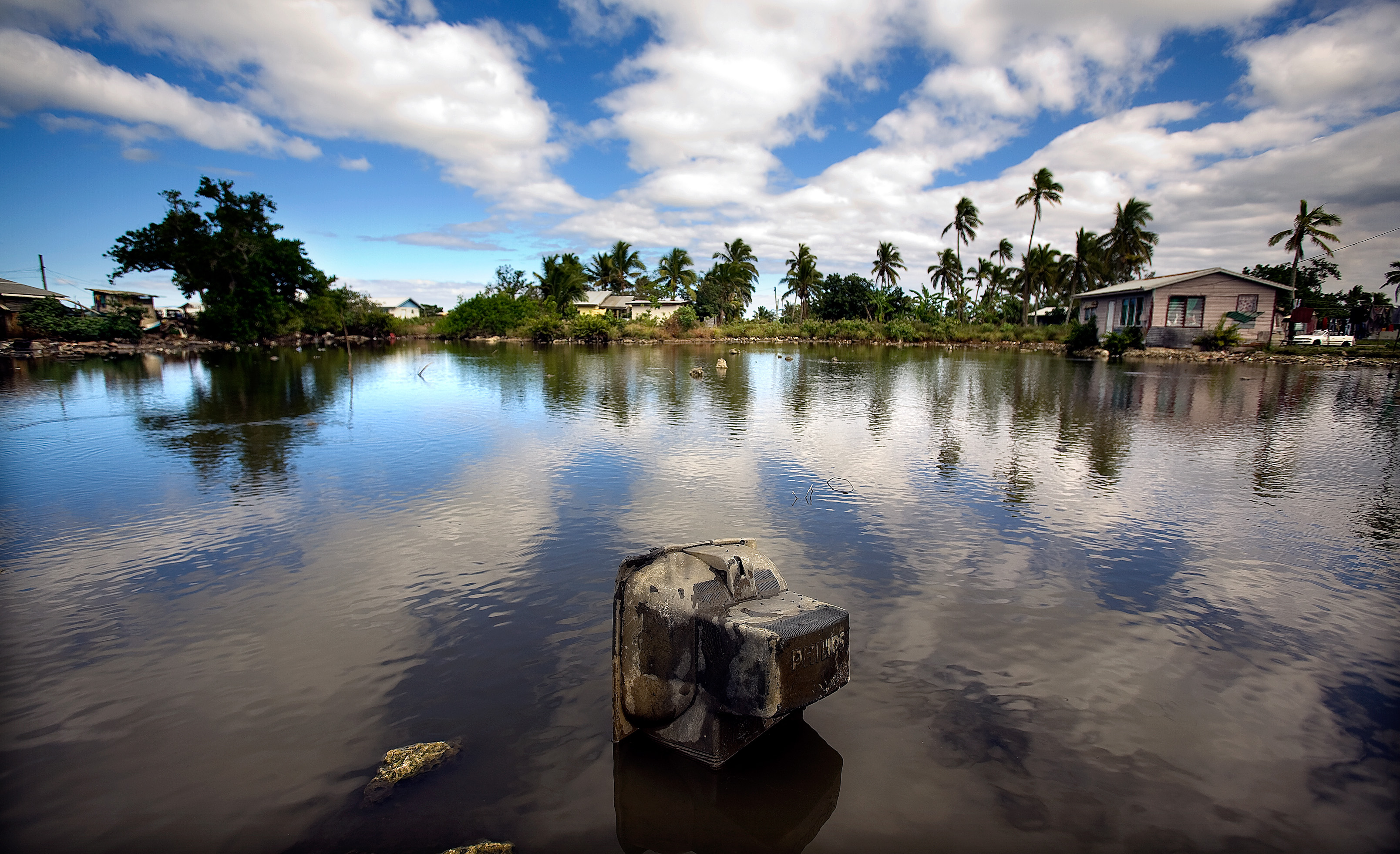 In 2015, millions of Syrian refugees fled their war-torn country in search of peace and security. The vast majority of these refugees have settled in areas surrounding Syria, and hundreds of thousands ventured further into Europe. Thousands of migrants died in the process, and many more were subject to violent attacks and the brutal detention of border guards. Migration of this level is extremely rare, but perhaps not as rare as one might think.

In fact, as climate change continues to ravage nearly every corner of the world, many are concerned about the plight of migrants across the globe that will find themselves displaced by an increasingly inhospitable world.

A recent study suggests that extreme weather conditions in over one hundred countries around the world directly influence migration patterns to Europe. The study shows that as the effects of climate change intensify the number of migrants seeking refuge in the European Union (EU) will triple by the year 2100 to about one million climate-induced migrations per year. Europe’s prosperity, developed infrastructure, and relatively cool climate are important factors in attracting migrants. The study showed that asylum applications to the EU from hot countries like Iraq and Pakistan increased as temperatures rose above 20C — prime agricultural temperature — while applications from cooler countries declined as temperatures rose towards 20C.

Regardless of how strongly one believes in the link between rising global temperatures and political instability which can push people to migrate, there is little doubt that effects such as rising sea levels give migrants no other choice. Indeed, many Pacific island nations are feeling the effects of climate change in real time as sea levels erase their homelands. Many Pacific island states find themselves only a few meters above sea level, meaning the two meters of predicted sea level rise by 2100 will swallow most of these countries, limiting options for those living there.

The Marshall Islands have been particularly impacted by this phenomenon. 20,000 people from the Marshall Islands now live in the US—a third of the Pacific nation’s population. Climate change is rapidly becoming the primary reason for this. The Marshallese currently enjoy a free association relationship with the US: any Marshallese person can travel to and work in the US without a visa, which makes finding refuge from the effects of rising sea levels easier. But this agreement is up for renegotiation in 2023, and there is no guarantee that it will be renewed. If it is not, the remaining Marshallese will be treated as migrants from any other country.

A major roadblock for climate-induced migrants is the fact that they are given very few significant protections under international law. The 1951 UN Convention Relating to the Status of Refugees only recognizes people who have fled war or political persecution as refugees. The thousands of climate-induced migrants do not receive this recognition and the protections that go along with it. It is certainly difficult to pinpoint exactly when climate change is the primary factor driving people to migrate. But without protections for those who are displaced primarily by environmental factors, there is nothing compelling receiving states to accept those migrants.

Under the Trump administration, being such a migrant in the US has not proven easy. In November, the President ended the Temporary Protected Status (TPS) humanitarian program for Haitian refugees who fled Haiti following the devastating effects of a 2010 earthquake. TPS provides protection and work in the US for 59,000 Haitian refugees — half the US Haitian population. The move effectively gives Haitians protected by this program until July of 2019 to leave the US or else be deported. Thousands of affected Haitians have decided to apply for asylum in Quebec.

As Naomi Klein points out, TPS is one of the only programs offered by the US that allows refuge for people fleeing “environmental disasters,” though its primary use is for people fleeing war-torn areas. Rescinding TPS from Haitians affected by an earthquake creates a worrisome precedent for those seeking refuge from environmental disasters wrought by climate change. There is indeed evidence to  demonstrate the US’ hesitancy to extend protection to refugees in general. For example, the US recently withdrew from a voluntary UN pact aiming to tackle the global refugee crisis. US Ambassador to the UN Nikki Haley explained the decision by arguing that the pact was “simply not compatible with US sovereignty.” Haley explained that “[American] decisions on immigration policies must always be made by Americans and Americans alone.”

Rhetorical weaponization of borders has been met with their physical weaponization as well. Indeed, climate-induced migration has become a central focus for many around the world who see it as a danger to national security requiring a militarized response. For instance, the US Department of Defense (DoD) has been primarily focused on the ways in which climate change – or rather, the migratory impact of climate change— poses risks to the national security of state. The DoD has identified climate change as a “threat multiplier,” with the potential to increase risks of “infectious disease and terrorism,” rather than being a threat in and of itself. This draws attention away from the ways in which climate change will affect access to food, water and other socio-economic needs of climate change migrants.

Much of the discussion around climate-induced migration has indeed centred on security concerns for Western countries, which receive tens of thousands of migrants from around the world. Commentary typically warns governments to prepare for the “tremendous conflict potential” of climate change and increased migration. These analyses tend to perpetuate a particular view of climate migration; one that views migrants not as people with a fundamental need for food, water, shelter and security, but rather as a potential security threat for Western countries. States focus instead on the ways in which scarce resources, food insecurity, and rising sea levels heighten the probability of violent conflict. Gregory White explains that this view of environmental security concerns “looks to the central role of the state and its security apparatus,” which tends to prioritize “security for the state only, not for societal actors.” This desire to protect the nation at all costs will affect the way that countries handle flows of climate-induced migration in the decades to come, often at the expense of the lives and well-being of climate change refugees.

Australia has instituted a particularly nefarious form of migrant detention. Asylum seekers headed to Australia by boat are regularly intercepted and relocated to detention centers on islands near Australia, including the Pacific nation of Nauru. A report from Amnesty International show that these detention centres are comprised of crowded vinyl tents in 45C to 50C temperatures. Detainees endure restricted movement, surveillance and abuse by camp guards, and are regularly denied medical care for life-threatening conditions. The detention centres are also known for instances of self-harm and, most jarringly, violent suicide. Fiji’s Prime Minister, Frank Bainimarama, has decried the detention centres, strongly emphasizing the likelihood of climate migrants from the Pacific leaving their homes given the very real threat of rising sea levels.

Europe, with its popular rise of far right political parties, fares no better in its treatment of migrants seeking protection. The 2015 refugee crisis saw over 11,000 migrants die while taking dangerous Mediterranean Sea routes due to border-crossing crackdowns from European governments. Oxfam has published accounts of refugees enduring brutal conditions at the hands of militarized European border guards that include “being stripped of their clothes in freezing temperatures and having cold water poured over them, attacks by dogs, beatings and robbery.” Hungary, for example, has received harsh criticism for having erected a barbed-wire fence along its border with Serbia in response to the 2015 crisis. The landlocked European country is also accused of preventing entry to refugees by beating refugees and chasing them with attack dogs. Similar treatment of greater numbers of climate-induced migrants can be expected.

Perhaps the most tragic aspect of current attitudes toward climate migration is that the countries most affected by climate change in the short-term are not responsible for the kind of heavy industrial activity that has contributed to the climate crisis in the first place. These heavily affected regions (Eastern and Western Africa, Southeast Asia, and the Pacific) tend to be poorer, constraining the capacity to adapt to the effects of an already unjust process of environmental degradation and natural disaster. Societies not yet feeling the effects of climate change must recognize the duty they have toward those affected by the cycle of environmental violence and restricted freedom of movement. This is not a matter of charity or national interest. If the nations of the world are to take their commitment to fight climate change seriously, they must recognize the right of those affected by climate change to live in peace and security, with access to the resources, freedoms and services necessary for a life well-lived.