Sexual Violence: A Weapon of War in the DRC 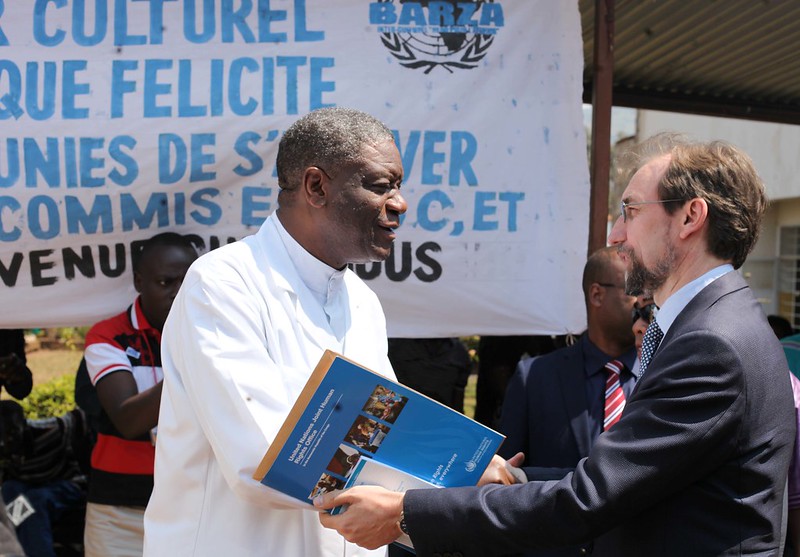 The Democratic Republic of Congo (DRC) has been dubbed the “rape capital of the world” and the “worst place on Earth to be a woman.” Since gaining independence from Belgium, the DRC has been unstable — rampant violence and conflict paired with weak and corrupt political institutions have contributed to ongoing volatility and vulnerability. The DRC’s unstable situation was exacerbated by the influx of refugees and armed groups crossing the porous border it shares with Rwanda, especially after the 1994 genocide, which causes issues to this day.

Armed rebel groups from Uganda and Rwanda have poured into the DRC and are being fought off by the government’s troops. What’s more, access to huge amounts of mineral resources — estimated at around $24 trillion in untapped wealth — fuel conflicts between armed groups and the DRC’s military. Antagonism between rival groups perpetuates a vicious cycle wherein violence is used to secure access to natural resources, which finance successive conflicts. These factors engender high rates of sexual violence throughout the country, inflicted by the DRC’s military and armed militias, as many combatants still view rape as one of the “legitimate spoils of war.”

While sexual violence is internationally condemned and prosecuted under international law by most international institutions — including the United Nations (UN) and The International Criminal Court (ICC)— it is rarely punished, further contributing to the cycle of violence. Human Rights Watch argues that “deficiencies in the law, the unwillingness of military and other officials to treat sexual violence as a serious offence, lack of protection for the victims, and various logistical and financial impediments linked to the dilapidated state of the judicial system” all help perpetrators escape punishment for their actions. Despite international condemnation for these atrocities, very little can be done on an international scale to punish the hundreds of perpetrators without more help from the local Congolese government, a government with minimal legitimacy and power, let alone in issues of sexual violence. The systemic use of sexual violence as a weapon of war in the DRC causes long-term repercussions that NGOs are trying to address while ironically reinforcing the problem themselves.

Wartime sexual violence, including rape, genital mutilation, sexual slavery, and torture, among many other atrocities, has become a widespread practice in the DRC. With an average of forty-eight women raped per hour and an estimated 12 per cent of the women having been raped at some point in the country, this issue is at its breaking point. Armed militias and government security forces use sexual violence as a weapon of war to control and oppress local populations, especially in the fight for mineral resources. Research shows a strong correlation between mining and sexual violence, as armed actors use it as a tactic to push out local populations and control mining — a sector already rife with gender-based violence.

Women working and living in mining regions in Congo are more vulnerable to violence as there are a “‘hyper-masculine and inherently violent mining culture.” Furthermore, this violence is used by armies to humiliate the enemy, reward recruits, and allow socialization and solidarity building between the ranks, and as a “mechanism of ethnic cleansing.” In the DRC, especially within armed groups and government military troops, it is seen as an inherent part of the conflict — “natural sexual assault” is based on the so-called biological needs and urges of men and is therefore seen as a justifiable offence.

With government troops and local and foreign armed groups using sexual violence in this way, the DRC’s social fabric has been damaged for the longterm, especially as sexual violence is both widespread and stigmatized. Survivors are often shunned from their communities, fracturing families’ ties and entire communities along with it. Survivors are seen as “unmarriageable,” which leads to honour killings or alliances between the victims and the perpetrators through forced marriage. It is seen as the only solution to regain dignity. This, in turn, contributes to building the ranks of armed groups, as the women have children trained as child soldiers to join these groups and perpetrate more violence.

Sexual violence in the context of conflicts has exacerbated other forms of gender-based violence in the DRC, including marital violence and child marriage. As sexual violence has become relatively commonplace and perpetrators go unpunished, this violence has trickled down into all aspects of society, including exacerbating marital violence. As the victims of this violence range between the ages of two and eighty, nearly the entire female Congolese population is affected by it. Furthermore, considering the stigma surrounding sex and pregnancy outside of wedlock, the UN reported the DRC as a hub for child marriage in the region, with 37 per cent of girls married by 18 years of age. This is a direct result of young girls of “marriageable” age being targeted and “ruined” by sexual violence, leading them to marry their assailants to maintain their family’s honour, raising the rates of child marriage across the country.

There has been limited government response to the DRC’s sexual violence crisis due to political instability and governmental corruption. The weak legal systems in place, especially in regions where conflict is still active, have left survivors with little recourse. However, there is a ray of hope as certain renowned perpetrators have been prosecuted – despite not fulfilling their sentences due to their positions within the corrupt government and army – including Jerome Kakwavu and other senior officers in the Congolese army.

The use of sexual violence fragments Congolese society, creating impacts for decades to come. Women play a vital role in the household and the workplace, so this violence and ensuing stigma have led to collapsing communities, which only fuel the cycle of violence. Sexual violence proves to be the cheapest and most efficient way to control or destroy a community, and the politics of silence surrounding survivors has led to isolation and other devastating consequences that some NGOs are trying to remedy.

Hundreds of NGOs have been deployed in the DRC for the last two decades to help victims of sexual violence and attempt to alleviate its long-term consequences. It has become one of the biggest humanitarian focuses across the country, with the UN even sending a mission to curb this violence. Denis Mukwege was awarded the Nobel Peace Prize in 2018 for his work with sexual violence survivors in the DRC and has been a vocal advocate for increased legislation around the issue and punishment for perpetrators. His eponymous foundation helps with the physical, psychological, social, and economic repercussions of sexual violence. However, this work has made him a target for government and armed militias wanting to continue this cycle.

Despite all the work that NGOs have done to aid survivors and their families, there is also a dark underside to NGO work that has actually contributed to worsening the situation. For example, a growing number of women deceitfully request and obtain aid provided to actual survivors of conflict-related sexual violence. By taking food and medical care for themselves, they take it away from the survivors who actually need it, and the real survival stories lose legitimacy.

NGO workers themselves also engage in sexual exploitation against local staff. Allegations of sexual abuse by aid workers are nothing new — Haiti and the Central African Republic both experienced scandals — but the DRC has seen over fifty women accuse WHO, UNICEF, Oxfam, Médecins Sans Frontières, World Vision, ALIMA, and the International Organization for Migration aid workers of sexual violence. Many Congolese women recount stories of being forced to exchange sex for work, with one calling it a “passport to employment” and others describing fear over losing their jobs if they reported the abuse. Working alongside these organizations pays considerably more than the average job in Congo, which allows for aid workers to exploit this vulnerability. As the DRC has such high rates of sexual violence, this type of exploitation might have gone unnoticed, especially as NGOs provide so much help for the local populations, and victims might not be believed. In a country where this is already such a large issue and where poverty, violence, and corruption only serve to exacerbate the problem, survivors feared reporting the abuse even more, should there be retaliation. The WHO released a statement about the investigation into the allegations, affirming that the “betrayal of people in the communities [they] serve is reprehensible.”

The use of sexual violence as a weapon of war in the DRC is a systemic issue with long-term repercussions, ranging from extreme trauma and family fragmentation to the spread of diseases and continued gender inequality, which all damage the fabric of society. The actions of NGOs have both helped and tremendously and undermined the work being done to aid survivors who still suffer from social precarity. Mukwege stated in his Nobel Prize acceptance speech, “We hope that the world will not wait any longer to act with determination and strength to assist [survivors] because the survival of humanity depends on you.” I hope so, too.