Sharing, Caring, and Praying For Sudan in the Twitter Age 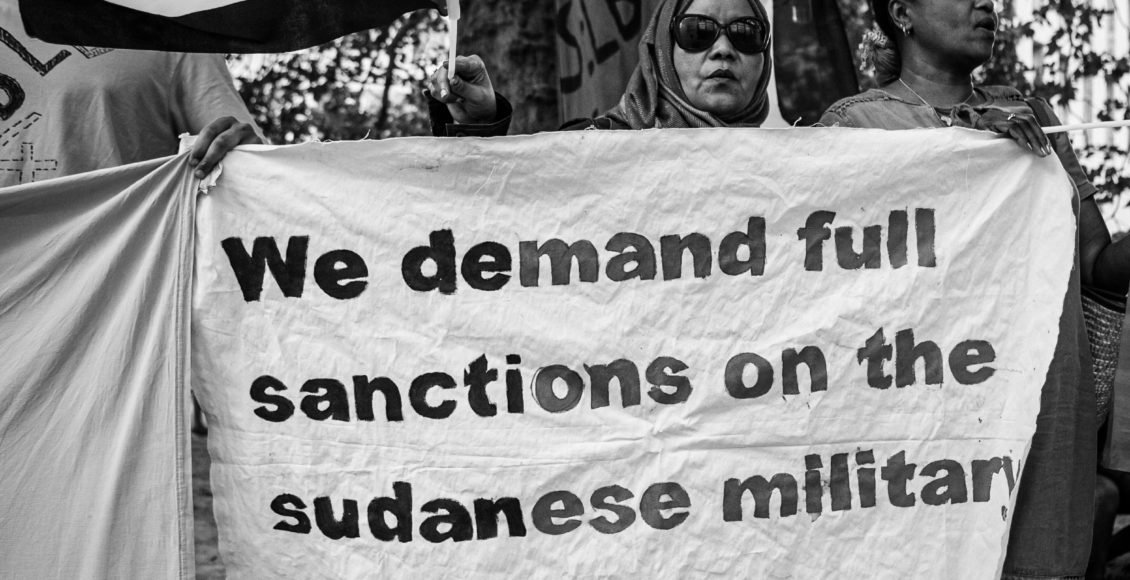 Protest in solidarity with the Sudanese revolution in front of the German Foreign Ministry. https://flic.kr/p/2ghQ3L2
Share

On June 3, a violent crackdown on peaceful protestors in the Sudanese capital of Khartoum cast an international spotlight on the North-East African nation. Sudan’s democratic transition-turned-human rights crisis achieved high levels of visibility through social media platforms such as Instagram, Facebook, and Twitter. During the month of June, millions of users shared hashtags like #StaystrongSudan, #BlueforSudan, and #Sudanuprising to raise awareness of the conflict.

The massive spike in social media activity following the attacks illustrates the changing face of activism. Over the past 15 years, social networks have revolutionized the practice of civic engagement by providing tools for fast and efficient communication. The popularity of movements like Me Too, Black Lives Matter, and Bring Back Our Girls, is evidence of the power of so-called “hashtag activism.”

However, the Sudan crisis also illustrates the many drawbacks of social media activism. Although Instagram, Facebook, and Twitter provided a global audience for the people of Sudan, this did not translate to a rise in direct engagement. Rather, online campaigns opened the floodgates for fraudulent aid accounts, misinformation,  and widespread “Slacktivism.”

Current Hostilities in Sudan date back to December 2018 when groups of young professionals began protesting the austerity policies of president Omar al-Bashir. Bashir’s 30-year term ended on April 11, 2019, leaving a power vacuum to be filled by the Transitional Military Council (TMC). Under the TMC, protestors, organized by the Sudanese Professionals Association, have called for a three-year democratic transition period.

The TMC’s reluctance to comply with popular demands resulted in an attack on pro-democracy protesters on June 3, leaving over 100 dead and over 600 injured. The military government then cut-off internet access in order to stymie future uprisings and prevent foreign backlash. Despite intimidation, Sudanese activists remained committed to democratization.

In early July, African Union delegates helped negotiate a power-sharing deal between protestors and the military council. The resolution outlines a gradual transfer of power from the TMC to a democratically elected civilian government along with an investigation of the June 3 attacks. Following the deal, TMC officials agreed to restore internet access throughout the country.

Without internet access, international social media campaigns provided a voice for the people of Sudan during the conflict. Account owners encouraged followers to share trending hashtags and change their profile pictures to the color blue in honor of 26-year-old martyr, Mohamed Mattar, who was killed during the crackdown while protecting two female protestors. In doing so, they hoped to attract greater media coverage and ultimately pressure Western governments into action. Several high-profile celebrities including, Rhianna, George Clooney, and Bella Hadid allied themselves with the cause, calling for solidarity with Sudan.

While social media successfully directed global attention toward the atrocities happening in Sudan, it also threatened the integrity of the campaign. Namely, social media coverage of the Sudan crisis gave rise to fake charity accounts on Instagram, Facebook, and Twitter.

Just days after the tragedy in Khartoum, hundreds of accounts promised resources for Sudanese victims in exchange for shares, follows, and likes. The most successful of these, @SudanMealProject, earned over 400,000 followers by pledging to donate food supplies. In an Instagram post, the account claimed that “For every person who follows and shares this on their story, we will provide one meal to starving Sudanese children.” @SudanMealProject was eventually exposed by staff writer at The Atlantic, Taylor Lorenz, and was subsequently shut down by Instagram.

In her piece, “Sudan and the Instagram Tragedy Hustle,” Lorenz breaks down the phenomenon of fake aid accounts. She explains, “the administrator of @SudanMealProject could not provide any proof that the account was working with any aid organizations, nor could the administrator back up any of the claims made in the account’s posts.” According to Lorenz, fake accounts latch onto global trends in order to gain exposure. As it is known to happen, the thousands of followers who clicked on pages like @SudanMealProject will soon find the account has changed its name and is now promoting a clothing brand, fashion influencer, or meme account. By providing an easy way to help, @SudanMealProject capitalized on both the Sudan crisis and the altruistic, albeit misguided, intentions of its followers.

In addition to disseminating false promises, these accounts also spread misinformation and problematic narratives. The rhetoric of @SudanMealProject and countless others was centered on famine relief. However, current tensions in Sudan are not the result of food insecurity. Rather, the people of Sudan launched a democratic uprising against the Transitional Military Council. By promoting meal plans to help “starving children,” administrators obscured actual events taking place in Sudan. What’s more, they invoked harmful imagery of the ‘helpless African child’ in need of a Western saviour.

Like @SudanMealProject, many social media campaigns fail to create a significant impact because participants believe their micro-actions are sufficient to create real change. This phenomenon of ‘slacktivism’ is defined by Technopedia as, “ [The] simple measures used to support an issue or social cause involving virtually no effort on the part of participants. Slacktivism is most commonly associated with actions like signing online petitions, copying social network statuses or joining cause-related social networking groups.”

A Call to ‘Slacktivism’

Slacktivism, on its own, is not intended to produce dramatic social change. Often, organizers will take to social media to raise awareness for a cause by spreading hashtags, slogans, and provocative images. This is expected to attract supporters who will ultimately form a more tangible network of advocacy. Although these campaigns are successful at circulating their message, they usually fall flat when it comes to facilitating meaningful political participation.

Statistics show that slacktivism rarely translates to an increase in direct engagement activities like contacting politicians, volunteering, or donating funds. Moreover, campaigns that rely on high levels of social media activism tend to lack the staying power of traditional movements. A study conducted by Lewis and Gray with Sociological Science analyzed the role of slacktivism in the 2007 Save Darfur campaign. They found that of the 1,082,858 Facebook group members, only 0.24% donated to the cause and only 28% recruited new followers. By 2009, new membership and donations almost completely dwindled, proving the viral movement had lost its momentum.

Not only does slacktivism fail to increase engagement, it also undermines it. Digital activism campaigns encourage acts of “token support” because they boost visibility, as seen in the case of #BlueForSudan. However, small effortless gestures produce a ‘Moral licensing’ effect. Kirk Kristofferson explains, “Moral licensing occurs when prior prosocial behavior gives people ‘licenses’ to subsequently engage in less moral or helpful actions.”As a result, slacktivism exempts patrons from performing more substantial acts of support.

The Sudan Crisis, and the social media movement it inspired, points to the many faces of digital activism. Despite minimal news coverage, the June 3 attacks sparked an international dialogue thanks to campaigns on Instagram, Facebook, and Twitter. By adopting blue profile pictures and sharing the stories of Sudanese activists, social media users helped bring attention to a humanitarian crisis that could have easily gone unnoticed. However, extensive social media visibility led the campaign to be co-opted by fraudulent accounts, opportunistic users, and slacktivists all seeking their own visibility. Without a tangible network of support, these campaigns were unequipped to mobilize the political, material, and financial resources needed to alleviate conditions in Sudan.

Emma Frattasio is a U3 student pursuing a degree in Political Science and International Development. Originally from Los Angeles, she specializes in North American politics, focusing on social movements, mass media, and urbanism. In her spare time, she enjoys listening to true crime podcasts at double speed.