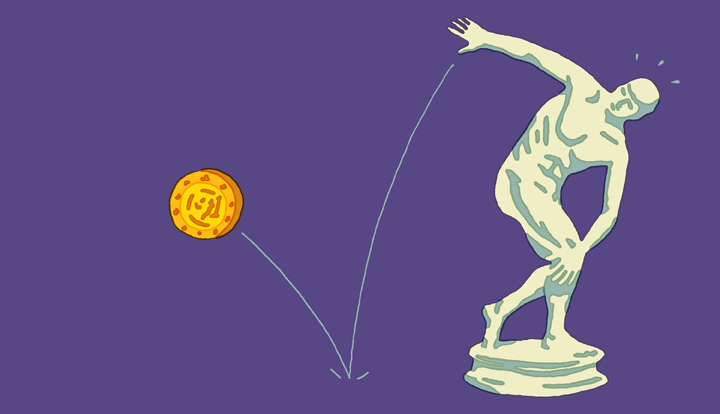 With the recent election of Greek Prime Minister Alexis Tsipras and the radical left coalition, Syriza, speculation has again arisen concerning the possibility of a Grexit (Greek exit from the Eurozone); the existential crisis summed up nicely by the immortal words of Clash lead singer, Joe Strummer: “Should I stay or should I go?” Of course, this question is not new; it is one that has been asked again and again throughout the first half of the decade with the fall of three successive governm 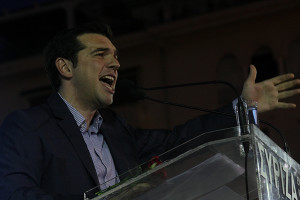 ents, most notably Papandreou in 2011, and now most recently with the fall of the Samaras government. Speculation of the likeliness of such an occurrence was low, until now, with the election of Tsipras who seems to finally be standing up to the strong-arming tactics of the Troika (the triumvirate of the IMF, the European Commission, and the European Central Bank) and the austerity regime championed by German Chancellor Angela Merkel.

Many say leaving would be disastrous, a terrible outcome for both Greece and the euro. An exit mechanism for the Eurozone does not even exist in the Maastricht Treaty, as the starry-eyed politicians who set an impetus for the currency did not even envisage a situation where it was possible, and the option to leave the EU did not even exist until 2007.[1] Among the supporters of a Eurozone which includes Greece is Evi Pappa, professor of economics at the European University Institute. In an interview with Al Jazeera, she said she “…doesn’t have much hope for Greece” and her answers show even more hopelessness for Greece and the euro if a Grexit occurs. She says that if this happens, countries will be less than enthusiastic to invest in those which might be speculated to leave like Spain, Portugal, and Italy, spiralling the Eurozone crisis even further into chaos. Among other European countries, Pappa also notes that Cyprus would also suffer a great deal as Cypriot banks are heavily invested in Greek debt.[2] Another difficulty would be the circulation of a new currency, and in the Greek case, a re-introduced drachma. Experts agree that bringing a new currency into circulation usually takes up to four months, during which time a temporary currency would be used. By the time the new currency was fully introduced, inflation would be sky-high (probably leading to hyperinflation) and living standards would be hit hard.[3] It is very evident that if Greece were to leave the Eurozone, the short-term effects would be socially and economically devastating, but supporters of an exit argue that in the medium-term, it may even be in Greece’s own interests. Introducing a new currency would allow Greece to devalue its currency (the new drachma), making Greek markets more competitive, since they use the euro; however, they cannot devalue their currency which would leave their markets stagnating and economy shrinking (it has shrunk 25% since 2010).[4]

Currently, Greece must set policies for “internal devaluation” (as opposed to being able to devalue currency): cutting wages and jobs, bleeding public services in order to pay off its debt, and receive bailouts under a strict regime of austerity.[5] The bailouts obviously are not working even though Greece has been in a primary surplus (meaning it spends less than it receives) since 2013. This is because most of the 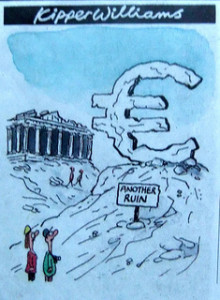 bailout money does not even go to aiding government activities – in fact only 11% of it does, the rest of the Eurozone has not been as generous as they are perceived to be.[6] An economic analysis done by Macropolis found that the other 89% of the 277 billion euro bailout money (minus the 16% used to pay interest) was used for various capital operations, such as debt servicing or meeting maturing debt obligations.[7] If Greece defaults and leaves the Eurozone, it would no longer have to face Merkel & Co’s grueling austerity measures, lessening its debt, perhaps leaving some room to grow, in addition to cheap exports and a currency that may be cheap enough to eventually attract investment. This then begs the question: Are the devastating short-term costs of leaving worth (very) long-term gains that may not even be possible in the future?

Regardless of this question and the arguments for a Grexit, it probably will not happen, at least in the foreseeable future. Martin Wolf, Financial Times columnist, says that leaving the monetary union would cause constant instability as every country, when in hard times, would consider an exit following Greece’s example; “Creating the Eurozone is the second-worst monetary idea its members are ever likely to have. Breaking it up is the worst,” he argues.[8] Further, Tsipras himself seems to agree and insists that he wants Greece to stay in the Eurozone; a solid 70-percent majority of Greeks also agree.[9]  The more relevant question in this regard is whether Tsipras should continue to fight for a debt reduction.

It is obvious that Greece cannot pay its debt in its current situation. The Troika can continue to “extend and pretend” (lowering interest rates and other investment schemes), but that would only stave off the crisis for a little while.[10] Debt restructuring seems to be the most viable option if Greece were to stay in the Eurozone. As we have seen time and time again, austerity does not work and rather plunges countries further into recession and debt (even the IMF agrees).[11] Merkel does not want this however; she argues that Greece must pay back their debts as they are morally obligated to; putting them in a sort of debtor’s prison.[12]

These tight-belt austerity measures that Merkel champions are not even the sole reason for the successful German post-war economy rather along with an unexpected housing boom, it has benefited from the crisis and the economic pain of other countries. The perceived nature of Germany as a “safe haven” among crisis countries allows it to have low, even negative, interest rates. In 2012, on a loan of 3 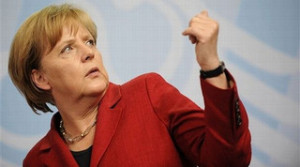 .9 billion Euros, Germany was given an interest rate of -0.01%. Its population growth is also due to the influx of immigrants from crisis-stricken countries. Lastly, its exports become more competitive with a weak Euro.[13] As a result of all this, it is not hard to understand the German position, but Merkel must realize that asking a leader to concede and not implement what he was elected to do is wrong and undemocratic, and furthermore, that her scorched-earth policies are toxic not only in Greece but all across Europe. The young, emerging minister has posed a considerable challenge to his excessively stern counterpart, Angela Merkel, one that he might not win. However, the battle against austerity must be won; democracy and the very future of Europe are at stake.

[3] Chibber, How Would Greece Leave the Euro.

[8] Wolf, Greek debt and a default of statesmanship.

[10] Wolf, Greek debt and a default of statesmanship