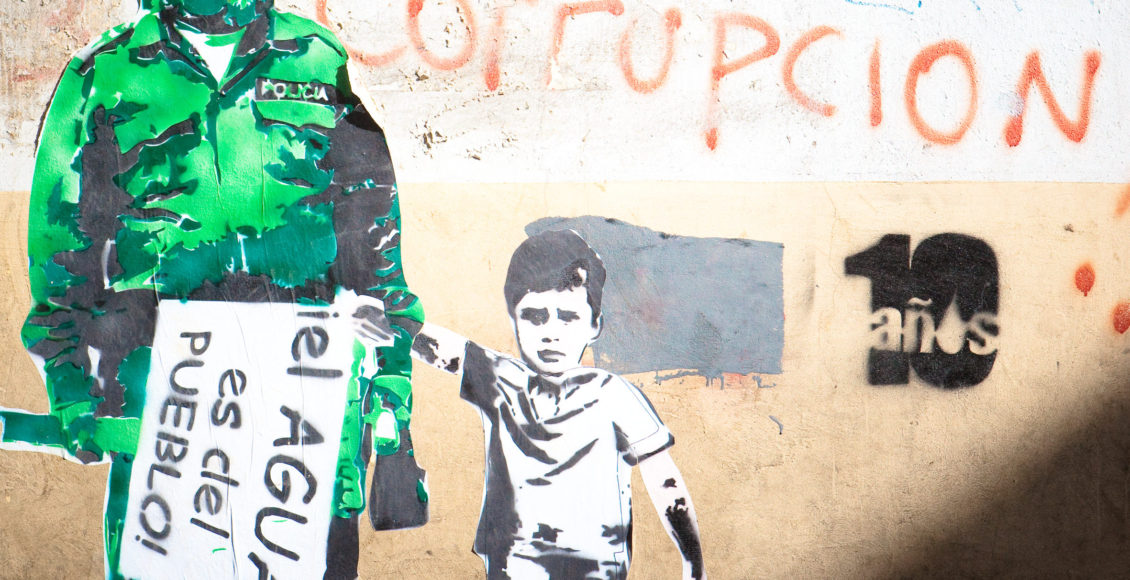 Water, or “blue gold,” has been characterized as the oil of the 21st century. However, access to this essential resource is limited. Humanity faces a growing water crisis that will be exacerbated by climate change and a general shortage of resources. At the forefront of the fight for water are Latin American countries which have a long legacy of neocolonialism, imperialism and unequal center-periphery relations. In Latin America, over 130 million people do not have access to potable water in their homes, and sanitation is even more inaccessible with only one in six persons receiving adequate services. As a fundamental element to our survival, ensuring there is equal access to water should be a priority for the entire international community.

The struggle over water is certainly not a new phenomenon in Latin America. Beginning in the 1990s, wide-scale privatization was often stipulated as a condition for assistance from international financial institutions. The subsequent loans were part of structural adjustment programs (SAPS), which is primarily comprised of assistance from the International Monetary Fund (IMF) and the World Bank (WB) to countries that have experienced economic crisis, such as Mexico, Chile, Peru, and Bolivia. Crucially, in order to obtain loans, the IMF and the WB require borrowing countries to implement certain policies. In Latin America, this involved a counter-revolution in development thinking and practice and a neoliberal ‘free market’. Following these policies, governments continuously sought to introduce free market policies and appropriate reforms, such as privatization of public enterprise, trade liberalization, and deregulation of capital markets. These efforts eliminated price distortions and allowed market prices and private sector agencies to redirect the development process.

This push for privatization has created an ongoing conflict over water management, with Latin America as a model for resistance. In his book Open Veins of Latin America (1997), well-known Uruguayan author Eduardo Galeano writes: “[…] Our wealth has always generated our poverty by nourishing the prosperity of others — the empires and their native overseers. In the colonial and neocolonial alchemy, gold changes into scrap metal and food into poison.” Latin American territories are resource-rich and serve as the base from which governments and corporations extract wealth; yet they are also areas where we find the most severe forms of poverty.

The social implications of the privatization and the commercialization of water are particularly pertinent in the negative consequences they have for Indigenous people. By endorsing a neoliberal economic agenda, the governments of Latin America have allowed multinational corporations to privatize and commercialize their water to the detriment of Indigenous people’s access to this crucial commodity. This has led to the continuation of the colonization and victimization of Indigenous communities by restricting their right to self-determination, and, by extension, their rights over their land and its natural resources.

Among the few arguments employed to promote the privatization of water in Latin America is the idea that competition in the private sector will lead to higher quality goods and lower cost services. In reality, the corporate monopoly on water in Latin America is part of the reason that prices have been high and quality has remained low. The damaging effects of water privatization are well-documented: rate hikes, cut-offs to customers who cannot pay, reduced water quality, huge profits for corporate investors, secret contracts, bribery and corruption. Cochabamba, a city in Bolivia with a majority of Indigenous people, is the classic example of a situation in which the combination of water privatization and commercialization has had disastrous consequences. Private, corporate control in Cochabamba led to popular uprisings in 2000 against Aguas del Tunari, a subsidiary of the enormous US-based Bechtel Corporations. After Bechtel was installed, it quickly raised water rates by an average of 35% (and in some cases as much as 200%), which was far beyond the budget of the city’s poor. Licences were even required for individuals to collect rainwater from their roofs, and residents were charged for water taken from their own wells. The Cochambamba Water War is recreated in Icíar Bollaín’s Even the Rain (2010), a Spanish drama film which portrays the intensifying moments of the war.

In 2006, incessant demonstrations in Bolivia managed to put a ‘stop’ to water privatization. Although the Indigenous communities of Cochabamba are considered to have been victorious in the fight against privatization and neoliberal structural adjustments, multinational corporations have since used different terms to describe their ventures. For example, the appropriation of a territory or bioregion allows for control over the resources in that area. Transnational companies such as Suez and Vivendi of France, and RWE-Thames Water of Germany can divert whole rivers as part of their production projects or make water unusable for local inhabitants, which essentially is privatization through contamination. All three of these companies have ranked among the wealthiest 100 corporations in the world and they have made their profit through the bottling of water and the monopolization of technology for extraction and purification. This results in a problematic situation where the citizens of the Global North have greater access to the natural resources of Latin America than Latin Americans themselves.

The struggle of the Indigenous community of Cochabambinos mirrors that of many Indigenous communities all over the world. Due to the dependence of Indigenous people on the environment and its resources, they have been the first to experience the consequences of climate change. In fact, given that the growth of the environmental crisis works in tandem with a decrease in access to natural resources, climate change will inevitably further reduce Indigenous access to water. In many areas, climate change is likely to increase water demand while shrinking water supplies. On the other hand, in areas where water supply is not an issue, there is likely to be an increase in runoff, flooding, or sea level rise. These effects can reduce the quality of water and damage the infrastructure needed and used to transport and deliver water. The lack of indigenous access to natural resources deepens a long and painful history of cultural and ecological devastation imposed by colonization and neocolonization. Indigenous people’s claims to land, water, and other resources are most appropriately framed not simply as “environmental” issues, but as “environmental justice” issues. This transpires from the fact that environmental justice mainly revolves around cultural and economic self-determination practices and belief systems that tie Indigenous people’s history, spirituality, and livelihood to the natural environment.

For the past decades, the people of Latin America have been combating neoliberalism with varying degrees of success. Indigenous communities, particularly those in Bolivia, Peru, Mexico, Chile, and Argentina, are working to combat growing multinational efforts aimed at commodifying water in Latin America. In communities both large and small, citizens are taking it to the streets, organizing referenda and petitions, and fighting for their right to water and a clean environment. As millions march for the environment all around the world, it is important to keep in mind that responses to these movements should also be motivated by Indigenous voices if we want to uphold true structural and environmental justices.