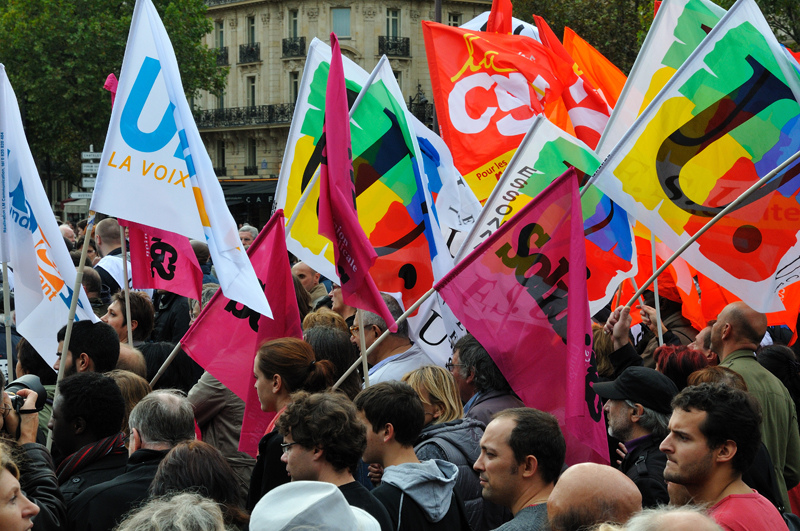 A demonstration of the French union leaders in 2010. Source: http://bit.ly/2fC67uH
Share

In an attempt to boost French tourism, Valérie Pécresse, the president of the Ile-de-France regional council, is currently dealing with the protests of student syndicates. As tourists now tend to avoid Paris because of the recent terrorist attacks, the LR councillor suggests that 200 volunteer students escort and show the tourists around the main locations of the capital, thereby reassuring them. However, the syndicates consider that the 250 EUR salary is an “exploitation of cheap labour”, despite it being the legal base for internship compensation.

The quarrel might seem trivial, yet it illustrates a well-known facet of the “French exception”: the never ending disputes between employers and worker syndicates. So much drama for a project that has yet to come to life! Employers accuse syndicates of blocking innovations, while the syndicates blame the employers for making all the decisions and exploiting the employees. The result is, of course, stagnation.

In France, it must be noted that the syndicates only count 7% of the population as members, out of which only 5% (i.e. 5% of 7%!) belong to the private sector. Despite this low rate of representation, syndicates not only have more members than political parties and negotiate vital aspects of the French society (unemployment insurance, health insurance, retirement, family allowance, housing, labour court, training, etc.), but they are entirely financed by the State. The main syndicate, the CGT, is moreover directly affiliated to the Socialist Party (PS) and the Communist Party (PCF). Most of the syndicates in France, in fact, have been created after the Second World War and have since then been opposed to any modification of their privileges. In other words, French syndicates represent a minority with a very specific agenda sponsored by the tax-payers.

Following the unceasing polemic about the reform of the French Employment law, the sociologist Philippe d’Iribarne sums up how obsolete this mindset has become: “For the current critics of the reform, the company does not exist. There are only “the employers” that one must constrain.” Now that people are working more and more in the tertiary sector, and that the country has entered globalization (and sadly, lean years), this apparatchik way of life, when added to the ever-growing bundle of norms, is suffocating.

French CEOs thus admit that it is a challenge for them to develop a company. Cyrille de Gastines, co-founder of a software that detects accounting mistakes (ironically, his business model relies on the proliferation of norms) describes some of these intricacies: “Did you know that you can only recover the VAT on company cars when they are not equipped with back seats, or else they would be considered as leisure vehicles? Or that the VAT on oysters basket is of 10% when the shells are unopened…but of 20% when they are not?” In November 2014, the CEO of Beck Industries, Karine Charbonnier, demonstrated to François Hollande that if she were to move her factory to England, she would spare 3 million EUR and thus be able to double her investments as well as hire more employees, as opposed to what she can do in France.

Finally, the Republican candidates for the presidential elections (except Poisson) are advocating for a change. Instead of the syndicates, they want delegates who would be directly appointed by the company employees to discuss with the employers: “in-house” syndicates, in other words. The candidates also wish to implement direct democracy inside companies, as employees would be asked to participate in a referendum for every new proposition of the directors. This should simplify the legal frame surrounding negotiations both outside and within companies, as well as reduce the cost of the syndicates.

In today’s world, syndicates “à la Française” have shifted from representatives of the workers to a third party obstructing all negotiations. The next president will hopefully not leave the country in such a jam and learn from Germany, The United Kingdom, or the Scandinavian countries.