How a Social Media Star Serves as Putin’s Secret Weapon 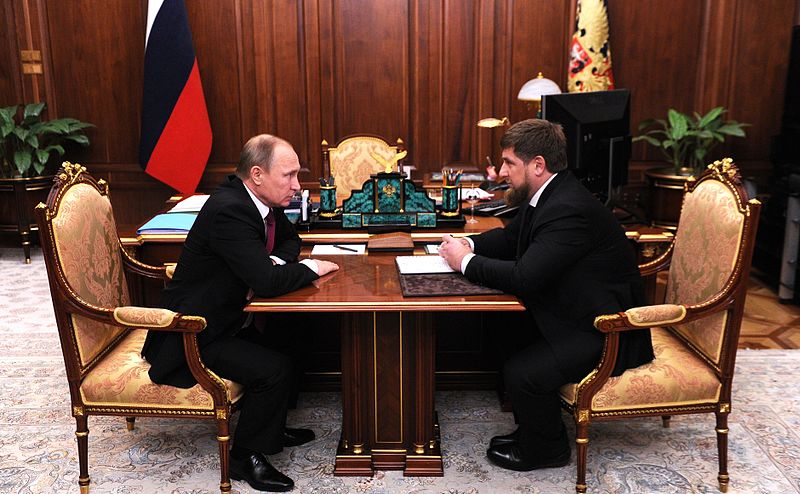 Putin and Kadyrov at a meeting in the Kremlin. http://bit.ly/2smDdp6
Share

Since the age of 30, Ramzan Kadyrov has led the Chechen Republic with carte blanche from Moscow. Excessive, arrogant, and a social media star boasting 2.7 million Instagram followers, he sits on a throne of luxury, carefully installed and maintained by the Kremlin. The arrangement is clear: root out extremism in exchange for money and a free hand to govern as pleased. For Vladimir Putin, Kadyrov has served as his henchman. He is credited with largely helping wipe out the separatist, Islamic insurgency in Chechnya. As Kadyrov’s rule has brought stability, Putin must maintain it, especially as many Chechens have flocked to join the pro-ISIS insurgency in Iraq and Syria. More now than before, Putin needs Kadyrov in power to prevent extremism from reaching Russia’s borders. This likely means that Putin will choose to overlook a long and growing rap sheet of political assassinations, corruption, and torture. Finally, Kadyrov’s actions in Chechnya can be viewed as synonymous with Putin’s greater agenda, specifically that of curbing extremism and rebuilding Russian relations with the Middle East.

Located in the North Caucasus, Chechnya is demographically, linguistically, and religiously separate from the rest of Russia, and it has long resisted Soviet and Russian influence in the region. Moscow, under the leadership of Boris Yeltsin, was internationally condemned for its disproportionate use of force and atrocities committed in the region. The Chechen leader at the time was Ramzan Kadyrov’s father, Akhmad, who switched alliances to side with the Russians. On the one side, radical Wahhabis wanted to continue their Jihad against Russia, infamously launching major terror attacks against Russian civilians. On the other side were those who allied themselves with Putin and aided in efforts to defeat the separatist insurgency. Since then, Chechnya has been overrun by internal instability and contention.

Characteristic of its instability, Chechnya is known for its lack of basic rights and freedoms. Kadyrov’s human rights abuses demonstrate the lawlessness that prevails in the region. Allegations of Kadyrov ordering the kidnapping and torture of suspected gay men have recently surfaced. This brutal purge has been the subject of condemnation among human rights organizations and foreign governments. Many hoped that Putin, despite his own alleged abuses, would address this blatant circumvention of Russian law in his recent meeting with Kadyrov at the Kremlin. Putin, however, failed to take any action. Putin’s failure to address or condemn Kadyrov’s circumvention of Russian and human rights law fits neatly into a pattern of Putin and Kadyrov working in tandem to achieve each other’s goals.

Freedom of the press is virtually nonexistent in Chechnya, pointing to a desire of both Putin and Kadyrov to silence opposition and minimize dissent. Many reporters –both domestic and international– have been threatened, have mysteriously vanished, or have been shot dead while investigating abuses. Putin has even allegedly outsourced his own silencing to Kadyrov. In February of 2015, Boris Nemtsov, an outspoken critic of Putin, was shot dead by a group of Chechen men near the Kremlin. Many have accused Putin of commissioning Kadyrov for the murder, as an investigation found that the perpetrators were former members of Kadyrov’s personal security brigade. Other politically motivated murders have been tied to Kadyrov, including the death of journalist Anna Politkovskaya in 2006.

The absence of proper enforcement of Russian law is clear in Chechnya. Its de facto autonomy points to an important quid pro quo dynamic between Putin and Kadyrov. For Putin, it is in his best interest to ignore Kadyrov’s abuses as long as Kadyrov accomplishes Putin’s dirty work and furthers Russian interests in Chechnya. Putin gives free rein to Kadyrov’s infamous personal army and corrupt police force to do as they wish, brushing off subsequent allegations as a mere smear campaign when under international or media scrutiny. In exchange, Kadyrov is protected by Moscow, given federal assistance, and delegated vast governing power. This money is merely pocketed by Kadyrov for personal spending sprees and distributed among his loyalists, leaving Chechnya in poverty.

The problem posed by Kadyrov is overshadowed by his usefulness for Putin, which goes beyond ensuring stability for Chechnya. Kadyrov can be viewed as a tool used by the Kremlin as part of a larger framework of foreign policy towards the Middle East. Russia was the subject of widespread criticism from Muslim-majority countries for its two decade long war against Chechnya, a war that they viewed as provoked by Russian hatred of Islam. Currently, however, the Putin-Kadyrov dynamic has become an asset for Russian relations with Islamic countries. Kadyrov has begun to make Chechnya more publicly Muslim, building new mosques and promoting Muslim culture. He has also built relations with Arab nations, including Saudi Arabia and the Gulf states, and has lobbied for their investment in Chechnya. Kadyrov’s actions can be seen as part of Russia’s wider effort to stabilize and rebuild relations with the Middle East, a demonstration that Russia is willing to cooperate.

Many Chechens have become disillusioned with Russian military and political involvement in Chechnya and have joined the violent Islamic insurgency, both at home and abroad. Moscow has publicly stated that Russia’s Federal Security Service (FSB) has targeted Chechen fighters in Syria, who have joined the ranks of ISIS fighters to fight Syrian dictator Bashar al-Assad. In 2015, an estimated 1700 Russian nationals, many of them Chechen, were fighting alongside ISIS. Kadyrov can be easily propagated by Putin as a supporter against this domestic and global fight to defeat extremism. Brigades of Chechen volunteers have been sent as part of the Kremlin’s fight against ISIS and other anti-Assad groups in Syria.

For Putin, a bigger concern is having these well-trained and seasoned insurgents reach Russian soil. While the Islamic insurgency in Chechnya has officially ended, extremists were able to exploit the volatile situation to create a hub for terrorists moving into Russia. Putin’s fight to eliminate jihad within Russia and eradicate ISIS in Syria is sure to make Russia a prime target for ISIS-inspired or -led attacks, especially in major cities such as Moscow and St. Petersburg. This is the logical conclusion given that Russia has already been the target of ISIS-claimed attacks. The downing of Russian airliner Metrojet 9268 over the Sinai Peninsula killed 219 Russians on board. Domestically, an ISIS-inspired group claimed responsibility for the 2017 St. Petersburg Metro bombing. Many perpetrators of these attacks themselves have been found to be ethnic Chechens, a testament to growing radicalization and an increase in homegrown terrorism. Putin will likely give Kadyrov even more autonomy in Chechnya to do whatever it takes to clamp down on those suspected of terrorism or of radical ties. Kadyrov will see this as a mandate from the Kremlin to consolidate his own power against Salafist extremists, who wish to implement Sharia law and rekindle a Chechen movement for independence.

Such ISIS-inspired attacks have given Putin even greater credibility to fight Islamic extremism, both at home and abroad. Rhetorically, Putin will likely be able to capitalize on these attacks to legitimize his war against global terrorism. Putin will likely see his approval ratings rise, as they typically do following terrorist attacks and military action, as he crafts his image as guardian of the Russian people. He will be sure to fully frame these attacks as granting him a blank cheque to do what is “necessary” to eradicate extremism. In this fight against extremism, Kadyrov will likely be one of Putin’s greatest assets. This will mean giving Kadyrov even more autonomy, federal assistance, and a blind eye towards his violations of domestic and international law.

Putin cannot defeat extremism alone by any means. Instead, he relies on a network of domestic and foreign allies. He cannot risk vulnerability, especially in a time of economic hardship with falling oil prices and a face-off with the West. Putin fears a spillover of the Syrian conflict into Chechnya, and having Kadyrov in power serves to ensure that his consolidated rule is maintained. So far, Chechnya has remained relatively stable since the end of the Second Chechen War and the insurgency that followed. So long as Putin can maintain the status quo in Chechnya and the continuing loyalty of Kadyrov, he will likely contain –or severely weaken– the spread of Islamic extremism into Russia. Doing so will undoubtedly mean continuing to ignore allegations of human rights abuses in Chechnya, again blaming it on false media reporting and a campaign by the West to undermine his rule. Even as Putin comes under greater scrutiny, economic sanctions, military hostility, and international condemnation, he is not likely to reconsider his approach with Kadyrov. Vladimir Putin is a ruthless pragmatist, and for him, the ends of containing extremism by far justify the questionable means of doing so.