Somalia Elects “Cheese” to the Presidency 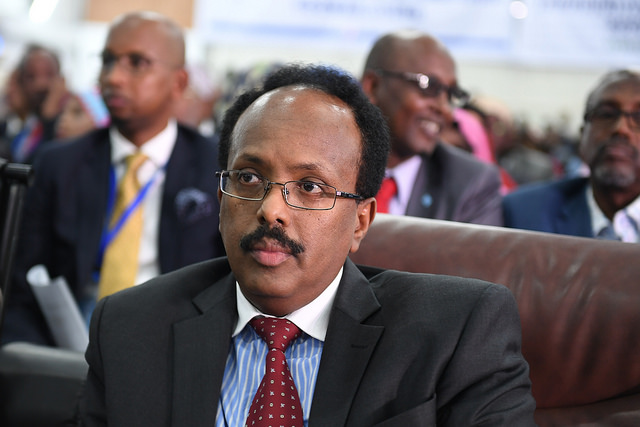 Somalia has been stuck in a consistent cycle of chaos and disorder for nearly three decades, but on Wednesday, February 8th, a glimmer of hope for a more stable and less bloody future emerged when small group of politicians elected a new president to lead what little land the central government still holds. Mohamed Abdullahi “Farmajo” Mohamed (the nickname comes from his favourite dairy product’s Italian translation: “formaggio”), a former ambassador to the US and a former Prime Minister, was selected to run what is seen to be, by local and international spectators alike, a failed state. Voting in the long-postponed election took place in Mogadishu’s international airport, as it was the only location safe enough to hold the election and withstand the threat posed by al-Shabaab.

The election, which took the assistance of numerous aid agencies, watchdog groups, and foreign governments to organize, was initially scheduled for the summer of 2016, but continuous terror, coupled with massive amounts of corruption, stalled its implementation. Unfortunately, the challenges of instituting a one person, one vote election system, which Somalia hasn’t successfully implemented since 1962, proved greater than the benefits. The coalition of foreign powers instead organized an elaborate indirect election scheme in which clan leaders would vote for members of parliament, who in turn would vote for the president. This was meant to streamline the process and endow it with a certain level of clarity, but ultimately the project backfired. Somalia, which is ranked at the bottom of Transparency International’s corruption index, remained solidly fixed in place. By some accounts, individual presidential candidates payed $50,000 to $100,000 to members of parliament to secure their vote. In a race with over 20 candidates, sums of money changing hands quickly reached the millions.

The shocking part of this election is that, in the most corrupt and least democratic election cycle Somalia has seen, the least corrupt and most well-liked candidate won. Farmajo was seen as the underdog because the incumbent president, Hassan Sheikh Mohamud, had the most money at his disposal. Bribes buy votes, and Mohamud could have afforded a number of them. But in spite of this rampant corruption scheme, Farmajo succeeded in winning what he called the peoples victory, a title with which the people seem to agree. As Prime Minister, Farmajo was widely popular, especially amongst soldiers. In an effort to keep soldiers from abandoning the army and fighting for whatever militia paid best, Farmajo instituted policies insuring that soldiers were paid their monthly salaries.

The question on everyone’s minds now is if the former New York Department of Transportation employee named after cheese can herald in a new crisis free era. The country seems to believe so, but he’s certainly facing a deck loaded against his success. Al-Shabaab continues to terrorize the country, roaming the capital despite the numerous African Union forces stationed there. At the end of January, the extremist group bombed a hotel in Mogadishu, killing 13 people. In the days leading up to the election, the group fired mortar shells into the capital in efforts to derail the election, and violence will continue on well after Farmajo settles into his position. In fact, as African Union troop contributing countries are setting deadlines to leave Somalia, the threat posed by al-Shabaab grows more potent as time goes on.

To truly kill the roots of the extremist group, Farmajo must embark on an even more challenging path: strengthening the government without breaking from its current incredibly federalist form. Somalia, though homogenous in ethnic group and language, is divided into, not only clans, but sub-clans, sub-sub-clans, and beyond. As the country slid into crisis in 1991, these regional alliances and clan affiliations were strengthened, and cooperation amongst groups proved more and more challenging. Somalia is composed of “federal member states,” regions which have district clan composition. In a number of these states, the local strongmen who have emerged are generally seen as more important than the president. Farmajo faces the daunting task of incorporating these states into the broader Somalia, where they will fall under his purview. He must build an alliance of clans without succumbing to the endemic corruption that has characterized the Somalian government for years. He must, for all intents and purposes, foster a sense of nationalism in a country previously devoid of nation-state status.

With the election of Farmajo, Somalia has been placed on a tipping point. The popular president offers a pathway to development and an end to violence – both thought to be unaccomplishable feats in the war-torn country. However, even if he can successfully navigate the challenges posed within his country’s borders, threats to security can come from international powers as well. The election of Trump poses a risk for Farmajo, as it is feared that the US president will cut off aid relief to the country when they need it most. He, along with Kenya, have begun limiting the escape options of Somalis, which could prove catastrophic in the coming months. The United Nations warns a famine could be on the horizon, which could bring about the starvation of millions. The number of Somalis needing humanitarian assistance is at a staggering 6.2 million, and Somalia holds the unfortunate title of third largest refugee producing nation.

The international community cannot ignore Somalia. Its location makes it strategically invaluable in terms of international shipping and trade, and its proximity to the continuous hot-zone that is the Middle East provides enough reason to support the new president in all of his endeavours. Foreign aid must be increased and allotted more responsibly, and drastic steps must be taken to reduce corruption. If everything in the country goes perfectly, Somalia might see itself emerge from a 30 years stint as a failed state. If not, the perpetual cycle of chaos and corruption will continue on, and the prosperous finish line remain uncrossed.