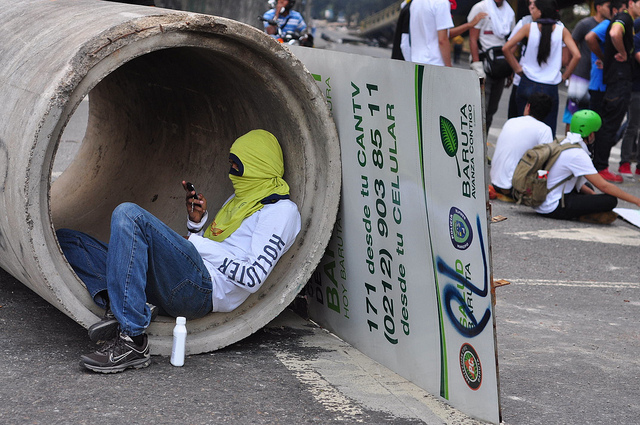 Like most of today’s popular protest movements, Venezuela’s anti-government demonstrations have been massively empowered by social media. This links them to near contemporaries like Brazil and Egypt. Venezuelan students from society’s upper echelons make up a majority of protesters demonstrating against the recently elected government of Nicolás Maduro, confidant of the late president Hugo Chavez. Protests began in February, condemning Venezuela’s rampant crime, government corruption, soaring inflation, scarcity of basic goods and state media control. Maduro’s government responded by tightening its grip on media this month, restricting coverage of the protests. Because of the government’s quasi-monopoly on information, protesters have turned to social media to broadcast their grievances and document the movement.

These protests are organized around the opposition parties, which narrowly lost to Maduro’s government in last year’s elections. However, this opposition coalition is beginning to crack as the demonstrations take on a violent life of their own. The demonstrations initially had a defined organizational structure, originally reflected in the Venezuelan protests’ Twitter presence, as on-the-ground protesters shared photos, slogans, and other information on the web. Leaders of the opposition parties, such as Leopoldo Lopez and María Corina Machado, also have Twitter accounts with large followings; their social media personalities play a significant role in the online life of the protests. However, the increasing fractures in the opposition are beginning to show in social media discussions as protesters from different factions turn against each other, with the “radicals versus moderates” struggles played out on the street barricades and political debates now carried out on the Internet.

Government officials, including President Maduro himself, also have active Twitter personas, using them to denounce the protests. This back-and-forth of accusations resembles a “cybernetic war”, as Maduro called it, and people on either side of the movement agree: the Twitter action has gotten ugly, with both sides occasionally disseminating false information and photos. In an effort to control this virtual battle, the government partially blocked image sharing on Twitter and other web apps at various points throughout February.

Besides the Twitter warfare, Maduro’s government has had a mixed response to the protests. Clashes between the National Guard and paramilitary pro-government forces and protesters have been violent, resulting in almost twenty deaths (and highlighting the army’s continued loyalty to the regime). However, Maduro did also try to hold a televised peace conference last week, which was boycotted by the protesting opposition leaders pending the release of Lopez and other imprisoned protesters. Following the failure of these peace talks, Maduro seems to have moved towards a less conciliatory approach: last Wednesday, the anniversary of Chavez’s death, Maduro delivered a combative speech denouncing the protesters and accusing the US and Panama of inciting a coup against him. While this could just be the belligerent propaganda not uncommon to the Chavista regime, Maduro did announce that he would cut diplomatic ties with Panama, suggesting that this forceful rhetoric will be backed up with forceful action. Demonstrations and violence continued this week, including the shooting of a leading student protester Monday night, which reinvigorated the Twitter warfare between the two opposing sides.

Therefore, the Internet manifestation of the protests highlights the class divide in the country. Protesters are mainly from the upper and middle classes, while Venezuela’s lower classes for the most part continue to support Maduro and Chavismo. Almost half of Venezuela’s population owns a smartphone – presumably the wealthier half. Thus the vociferous social media battles reflect the deep economic rift in society, the root of Venezuela’s political woes. Also, the failure of the attempted peace talks does not reflect the lack of a possible compromise; rather, the institutional fragility of Venezuelan democracy presents a structural challenge to political and economic reform. This is shown through the opposition’s inability to create a lasting coalition, as well as the increasingly oppressive nature of Maduro’s regime. Maduro’s government should continue to try and negotiate with the opposition. This would support their aspirations to democracy and prompt them to deal with the legitimate issues that the demonstrations bring up. Unfortunately, the escalating violence does not point to such mediation. Rather, the growing divide in Venezuelan society predicts a continuing downward spiral into violence and governmental repression.