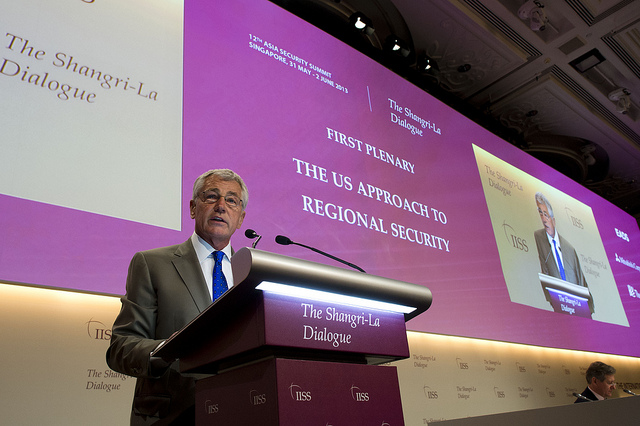 The most recent talks at the 14th annual Shangri-La Dialogue, a security forum attended by governments from Asian Pacific countries, have again brought forward the question of territorial disputes in the South China Sea. Islands, most notably the Spratly Islands, within the Sea promise regional countries economic benefits due to their extensive oil and natural gas reserves, and their abundant fishing opportunities. The South China Sea also facilitates $5.3 trillion worth of international trade annually making it a commercial asset for several nations (Counting the Cost, Aljazeera, 2015). However, China’s seemingly unlawful annexation and its increasing militarisation of about 80 per cent of the Spratly Islands have given regional actors – such as the Philippines, Vietnam and Malaysia – and the international community a cause for worry. Although affected nations have expressed their discontent towards China for its aggressive behaviour, it is the straining of relations due to conflict of interests between the United States and China that could potentially be destabilising.

The primary point of contention for the US is the economic and commercial setback they might experience due to China’s access to abundant oil reserves and prohibition of free navigation for Americans in the South China Sea. A boost in the Chinese economy following an acquisition of 125 billion barrels of oil and 500 trillion cubic feet of gas from the seabed of the South China Sea, as estimated by the Chinese National Offshore Oil Company, poses a threat to the balance of economic influence in Asia (Glaser, Council on Foreign Relations, 2012). China may attain hegemonic capabilities, thus roping the US into conflict in an attempt to keep China at bay.

On the one hand, energy analysts from large US-based energy companies like Exxon and Chevron argue that Chinese economic growth due to extra resources will be marginal and it is highly unlikely to threaten US influence. They claim that Chinese estimates of oil and natural gas are grossly inflated. The US Energy Information Agency estimates only 11 billion barrels of oil and 190 trillion cubic feet of gas are present under the surface of the South China Sea and points out that the amount is minuscule compared to what the US receives from their own turf and the Middle East (Lannin, ABC news, Aug 2015). Nevertheless, if Chinese estimates prove to be accurate, the US would have reason enough to intervene and prevent China’s exploits for additional resources in the South China Sea. This balancing act would partially be done because China would have the capabilities to increase the rate of exports to the US, widening the imbalance of payments and trade that already exists in China’s favour. Also, China’s claims over the Spratly Islands would force foreign vessels and planes to take different sea or flight routes other than the Western Pacific, thereby making imports more expensive and exports less profitable for the US and other countries that engage in international trade.

Another American interest at stake regarding the South China Sea crisis is regional security, considering the US serves as a guarantor for its allies in times of threat. In 1951, The Mutual Defence Treaty was signed between the Republic of Philippines and the US to assure assistance in the form of military training, equipment, and (if “constitutionally” permitted) physical presence of allied armies when externally threatened. If Filipino authorities declare the naval skirmishes involving firing and other damages by China as grave external threats, the US would be pulled in, raising the stakes of the conflict. Although American intervention would be very costly and destructive for both sides, defection on the mutual agreement would cause American credibility to falter not only in the eyes of the Philippines, but also by other regional actors such as Taiwan and Vietnam – countries with which the US also has diplomatic ties.

As such, US actions are a double edged sword, most accurately embodied in the 2012 Scarborough Shoal Incident. In response to Chinese fishing vessels present in the unoccupied reef of Scarborough, Philippines deployed a warship, resulting in a standoff between the two vessels. The tiff was over illegal fishing by the Chinese in an area considered Philippines’ Exclusive Economic Zone (EEZ), wherein the state can exercise “sovereign right” over a specific area of waters in the sea for commercial purposes. Washington’s mediation deal was accepted by both parties and was considered a success by American diplomats in the short term, until China broke the integrity of the deal, and occupied Scarborough reef anyway. The US, however, accepted China’s actions since Chinese vessels did not damage neighbouring ones to the point where Filipino security was threatened (The Diplomat, June 2015).

If the US continues to accept Chinese expansionism on the grounds of it being nonviolent, there will no end to the annexation in the South China Sea because quiet piecemeal occupation has been China’s strategy so far and continues to prevail. The term ‘Cabbage strategy’ has been coined to describe China’s steady and gradual acquisition of other countries’ EEZs for reclamation purposes and usage of paramilitary forces on the new reclaimed land, to avoid being deemed unlawful (The Diplomat, 2013). It might get to a point when China has enough power to enforce its claims through force and subsequently trigger the Security Dilemma as outlined by neorealist thinkers in International Relations (IR) theory, when states’ distrust of other states compel them to arm themselves in the name of security. One could argue that recent increases to the Filipino and Vietnamese military arsenal is a precautionary response to the US being an untrustworthy ally, and China being far too elusive about their plans with the Islands in the South China Sea.

Furthermore, expanding upon IR theory, miscalculations during American reconnaissance naval exercises and the media exacerbating the conflict could lead to a Conflict Spiral. Aljazeera sources have estimated that at the rate at which China is arming itself, the Islands will be equipped with complete military garrisons, naval capabilities and paramilitary forces in two years. Although increasing militarisation of claimed islands might not prove provocative enough for the US, clashes between American and Chinese vessels is very likely given the number of them occupying the same region. In addition, China could declare the South China Sea as a core interest, as Beijing alluded to in 2010, prompting the US to intervene. Conversely, the US might take a more offensive stance if they get intelligence that China has been downplaying their estimates of oil in the region to deviate world attention from the South China Sea. Therefore, information and media must be regulated to avoid misperceptions from both the American and Chinese side.

With all said, neither the US nor China would go to war upon the first chance. Threats would be exchanged, but negotiations and mediation would ensue in the background. In this way, the South China Sea Crisis can be compared to the the Cuban Missile Crisis, when it was in both countries’ best interests to not attack each other. Although the notion of nuclear annihilation in the Cuban Missile Crisis was the primary deterrent, the South China Sea Crisis has deterrents of its own. US and China putting economic sanctions on each other would be catastrophic for both countries due to their interdependence. Other powers in the world would also prioritise US-Chinese mediation as sanctions would affect their economies too. As long as American diplomacy is geared towards preventing China’s zero sum game in the region without overstepping its own legal and military boundaries, the South China Sea will be a relatively stable region.