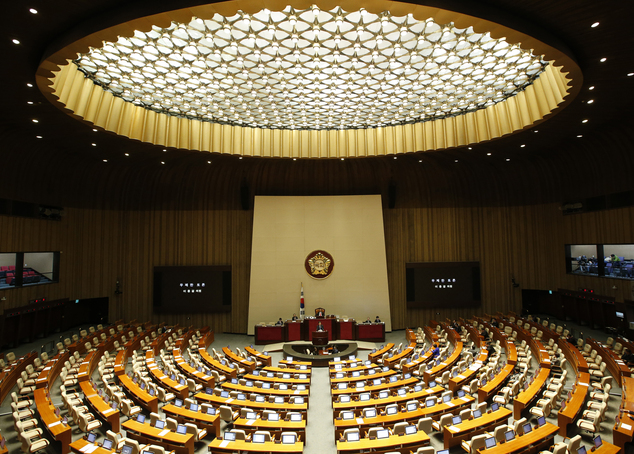 The last speaker of the session, Lee Jong Kul, a lawmaker of the main opposition the Minjoo Party, speaks at the National Assembly in Seoul, South Korea, Wednesday, March 2, 2016. Outnumbered South Korean opposition lawmakers have ended more than a week of nonstop speeches in the National Assembly aimed at delaying a vote on the country's first anti-terror legislation. (AP Photo/Lee Jin-man)
Share

Every March 1st is Independence Movement Day in Korea, which commemorates the historic civil uprising in 1919 against Japanese imperial rule. But this year’s commemoration marked more than a statutory holiday, as hundreds of thousands of people gathered to observe another monumental event in Korea’s political sphere: a 192 hour filibuster that is now the world’s longest one to date. This non-stop speech marathon run by a total of 38 people lasted 9 days, from February 23rd to March 2nd.[1]

To facilitate a better understanding of what a filibuster is and what it embodied particularly in Korea over this period of time, a filibuster can be politically defined as an action that is intended to delay or prevent a legislative proposal, usually by relaying or prolonging speeches before a vote.[2] It is often used as a way for the minority party to push for changes in legislation or prevent a bill from passing.

On February 23rd, South Korea’s National Assembly Speaker Chung Ui-Hwa asserted his authority to table the much contested Anti-Terrorism Bill, so the opposition parties moved for a filibuster in protest. This marked the nation’s first filibuster in almost fifty years.[3]

This filibuster was deemed to be the last resort that could block the passage of the Anti-Terrorism Bill as the leading Saenuri Party holds a majority of seats in Parliament, claiming 157 out of 293 sitting MPs, and passing a bill requires only a simple majority.[4] Given the last parliamentary session before April’s legislative election had been scheduled for March 10th, the filibuster was anticipated to suspend debate until the 10th to rescind the Bill.

The Anti-Terrorism Bill and Why It Is Unnecessary

The Anti-Terrorism Bill was initially drafted in 2011, when it failed to make much progress past its introduction in the National Assembly due to concerns over the National Intelligence Service’s potential abuse of its citizen surveillance capabilities.[5] The National Intelligence Service (NIS), Korea’s main intelligence agency, has a three part mandate: domestic security, national security, and counterintelligence operations against North Korea. The bill was condemned by many civic groups and lawmakers for the unprecedented and unconstrained authority granted to the NIS over South Koreans’ personal freedoms and privacy. As a response, the current bill was modified to call for a new anti-terrorism centre under the office of the prime minister, but the new bureau is expected to work closely with the NIS.

The recent introduction came in light of North Korea’s missile tests and rocket launch[6], which have become common occurrences before election periods in South Korea. Nevertheless, the Saenuri Party declared the recent tensions on the Korean peninsula a “national state of emergency corresponding to a war or incident”[7] and immediately moved to table the Bill.

However, the proposal may breach more rights than it presumably wishes to protect. The Bill’s Article 2 and Article 9 will ultimately provide the NIS rights to access the public’s private information such as telecommunication records and financial transactions without due legal process. Further, it aims to create a new espionage unit under Article 6, yet it will report to the chief of NIS who will coordinate surveillance, analysis and investigation into leads that point to a possible attack. [8] Any effort to augment NIS’s authority is problematic because of its worrisome track record for meddling with politics. In 2015, the immediate former NIS chief was sentenced to three years in prison for unlawfully interfering with the presidential election in 2012 in favour of the incumbent President Park. The charges included meddling with social media to falsely taint the reputation of her opponent. In 2005, a former deputy chief was arrested for illegal wiretapping and allegedly attempting to destroy evidence.[9]

There already exists a government portfolio that claims prerogatives similar to those of the proposed unit. The President’s executive order in 1982 established an Anti-Terror Manual that allocates surveillance and investigation authority to the government’s 11 departments, including the Police, Supreme Court and the National Intelligence Service. The Prime Minister is the designated chairperson responsible for monitoring and managing the system. Yet when prompted by the first filibuster speaker, incumbent Prime Minister Hwang was evidently unaware of his post.[10] The footage of the speaker asking Hwang whether he knew who the chairperson of the existent Anti-Terror bureau was and Hwang’s uncertain response went viral on social media and helped fuel public interest in the ensuing filibuster.[11] It was later made public that Hwang has never called for a meeting since taking office in June 2015.

Moreover, the Bill under Article 12 includes the authority to delete any material online that references acts of terrorism, which they have yet to define. This includes news articles, posts and videos on social media. However, its vague mandate can allow the government to shut down political dissent by removing content that openly criticizes or satirizes it.

Ultimately the only check and balance remains the single human rights rapporteur appointed by the Prime Minister under Article 7, who cannot per se administer sufficient protection against abuse of power.[12]

The filibuster came to a conclusion on March 2nd with final remarks by the Opposition Party Leader, and the Bill was passed on the same evening with 156 votes for.[13] An amendment proposed on the 1st before the filibuster’s closure was voted down prior to the final vote.

The Opposition Minju Party decided that the filibuster was delaying the passage of a bipartisan deal to redraw electoral districts in time for the upcoming legislative elections in April. Saenuri condemned the filibuster for putting the legislative body in a coma and argued that its further prolongation could jeopardize Minju’s chances in the election.[14]

In all, the filibuster could not prevent the passage of the Anti-Terror Bill, which will become law after the formality of becoming endorsed by the Cabinet Council. But its legacy could prove much more consequential.

Rather than conventionally reciting phonebooks and recipes to purposefully stall time[15], MPs behind this record breaking filibuster evidently invested a considerable amount of effort behind the scenes: they used the allocated time to cite related laws, academic studies, news articles and public comments, while one appropriately quoted from George Orwell’s 1984.[16] Many wore running shoes and refrained from drinking water to avoid any disruption during their lengthy speech, including washroom breaks which are forbidden under the “no break over a minute” rule.

Many have hailed this filibuster as a political breakthrough for South Korea, during which public interest in Korean politics remained high. Live broadcast of the filibuster grossed over 5.8 million views over the week, while the Justice Party invited the public to share related resources they could consult for their speeches.[17] Many people came to watch the ongoing speeches, especially on March 1st, when there were waitlists for those outside of the hall’s capacity of 400 people.[18] Some held their own filibusters outside the Parliament building in solidarity.[19]

The Saenuri Party has now been the ruling party for almost a decade, with both the incumbent and previous president being Saenuri nominees. However, public support for the leading opposition party seems to have grown in light of the filibuster[20], and it is safe to anticipate some political realignment in the future.

South Korea will have its 20th legislative election on April 13th, followed by presidential elections at the end of 2017.