Star Power, Black Power, and the Limits of Celebrity Activism 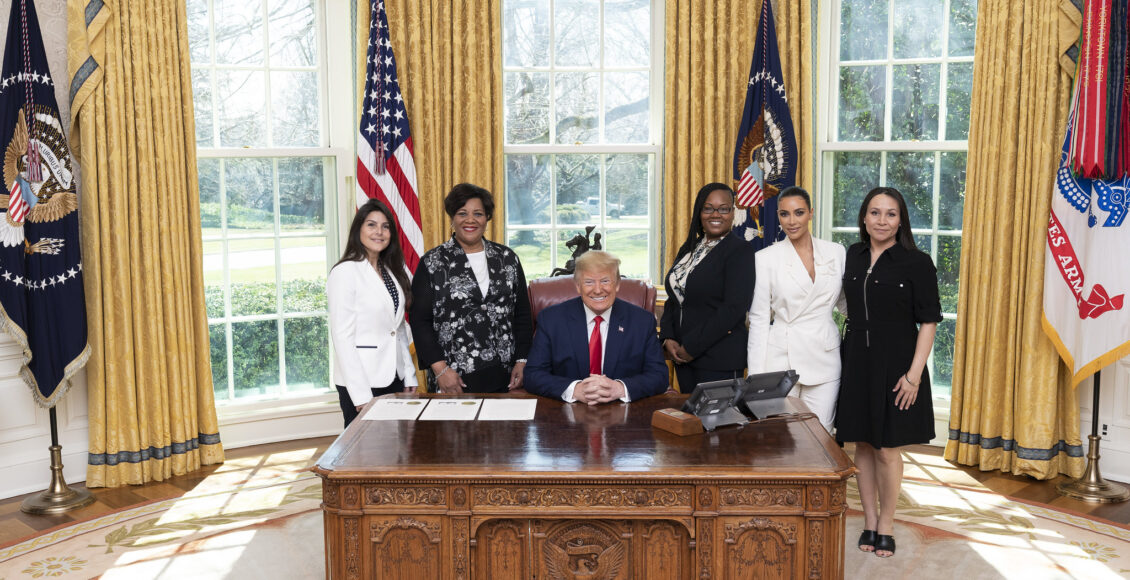 The mass incarceration of Black people in the United States has long played a significant role in disenfranchising generations of African-Americans. Although Black-led organizations have consistently advocated for reforming the criminal justice system to protect non-violent offenders from disadvantaged backgrounds, little has been done to stymie the growing influence of the prison industrial complex. Yet, in 2018, Kim Kardashian, arguably the most recognizable American social influencer, delved into the political sphere to challenge this system by persuading the Trump administration to commute several non-violent offenders’ sentences. Kardashian worked with the White House to successfully commute the sentence of a woman named Alice Marie Johnson, who was sentenced to life in prison for non-violent drug related charges, but ‘‘accepted responsibility for her past behaviour and had been a model prisoner over the past two decades.’’ She also helped commute the sentences of several other inmates who had rehabilitated themselves during their time in prison and “paid their debt[s] to society.” Ultimately, Kardashian was able to successfully leverage her celebrity status to advocate in support of clemency petitions for a total of 17 inmates within the federal prison system.

Fast-forward to 2020, celebrity voices have yet again found themselves in the midst of the greater socio-political movement against racial inequality. Following the circulation of a video documenting the senseless murder of a Black man, George Floyd, by Minnesota police on May 25, many have opened their eyes to the realities of police brutality and institutionalized racism. Subsequently, millions joined the fight for justice, calling for reform of the systems that perpetuate Black people’s oppression in the United States and across the world. In the digital age, and especially during the global COVID-19 pandemic, celebrities have leveraged their online platforms and follower-bases to speak out on these issues and to raise public awareness of the movement. Many celebrities have used their Instagram or Twitter pages to circulate resources, educate people on the realities of racism, pledge financial support to activist organizations, and share personal pledges to fight racial biases within their respective industries.

Although it is important to appreciate the potential for social change that accompanies celebrity activism, it is also essential to recognize the limitations of such “star power.” The overwhelming attention brought on by celebrities, especially those who fail to speak out or those whose social media presence and contributions appear self-serving or insignificant, is notable. Recently, celebrities’ attempts to speak out on the current fight for racial justice have drawn heavy criticism, with initiatives like the “I Take Responsibility” video or the #blackouttuesday hashtag. The “I Take Responsibility” initiative presented several well-known figures in Hollywood, including Aaron Paul, Sarah Paulson, and Ke$ha, who pledged to fight against racism by ‘‘standing against hate’’ and refusing to allow ‘‘racist jokes or stereotypes to be uttered in [their] presence.’’

However, many observers, especially in the Black community, did not view the campaign as a tangible effort to address systemic racism. Instead, the video came across as a staged, vaguely-worded attempt to centre the movement around some of Hollywood’s biggest names without directly addressing discrimination faced by Black actors and entertainers in an industry that often fails to appreciate or amplify their voices and struggles.

Furthermore, the #blackouttuesday initiative, which encouraged celebrities and social media users to post black screens on their feeds and refrain from posting their regular content on that day, also drew criticism. The “blackout” posts largely overshadowed vital posts and resources shared by Black activists using hashtags such as #blacklivesmatter. Celebrities like Emma Watson also encountered judgment, as her first contribution to the movement was a series of “blackout” posts that conserved the aesthetic of her Instagram page, coming across as performative activism.

In some cases, celebrity activism diminishes the efforts of those who consistently speak out and fight for social justice movements, despite their lack of notoriety. Although Kim Kardashian played a valuable role in facilitating the overturned convictions of several inmates, many grassroots organizations worked tirelessly to promote systemic criminal justice reform before Kardashian’s involvement. For instance, in Louisiana, organizations like Louisianians for Prison Alternatives and Operation Restoration regularly advocate for an end to mass incarceration while providing community support for former inmates. In 2017, they facilitated the passage of ten reform bills to reduce the number of people incarcerated for nonviolent offences and reinvested the money that would have initially funded imprisonment in social programs to benefit local communities.

This overpowering effect of star power was also observed with the #MeToo movement in 2017. The “Me Too” movement was originally coined by Black activist Tarana Burke in 2006 to encourage empathy among women of colour who had experienced sexual abuse. But, the movement only picked up speed when actress Alyssa Milano spoke out about her personal experience with sexual harassment and assault in the entertainment industry. Four months after the #MeToo movement gained widespread visibility, Burke noted that the media focus on celebrities was taking attention away from the systemic nature of sexual violence. “The way that this becomes a sustained movement and not just a moment is that we don’t wait for one individual — one person that we’ve deemed the media darling or the hero of the moment — to drive this conversation,” she shared.

Thus, the potential harm of celebrity activism arises when society focuses more on individual discourses instead of addressing the legacies that created such oppressive, discriminatory systems in the first place and when observers fail to recognize how issues like sexual violence disproportionately impact women of colour and LGBTQ+ individuals. Once celebrities yield their contributions to a social movement and move on to other projects, activists like Burke and community organizations remain at the frontlines of the fight to address the root causes of such issues and therefore deserve appropriate recognition for their efforts.

I want to thank all of the amazing people that took the time to speak to us directly. I am blown away with your knowledge, eagerness to teach and commitment to ensuring Black voices are not silenced. Educating ourselves is the first step if we hope to make any progress in bringing an end to systemic racism. As much as one might want to believe things have gotten better we cannot deny any longer that they have not. We need to acknowledge that social, political and economic discrimination against Black communities continues to exist. There is a deep pain that needs to be healed. Unless this is recognized history will continue to repeat itself over and over. ⠀ ⠀ ⠀ Tomorrow is Juneteenth which commemorates the day slaves in Texas were told they were free on June 19th 1865. To learn more of the history and the movement to make it a national holiday read The article in my bio. Please take the day to have conversations with your family and friends about the importance of Black Lives Matter and how we all need to join together to ensure equality and justice and then continue these conversations every day!⠀ ⠀ ⠀ Everyone needs to have their voices heard and we can do that by VOTING! We will not let voter suppression stop us! Check out @whenweallvote to get registered and find other helpful resources.⠀ ⠀ ⠀ It’s not lost on me how fortunate I am to have this platform and appreciate you all for taking the time to watch, listen and take in the powerful messages and information we’ve been provided over the last two weeks by some of the most inspiring people I’ve come across in my life. If you missed any of these incredible IG stories they are all saved in my Story Highlights under #BLM and #BLM2. This is just the beginning and we will continue to hear from other Black voices and as well as other marginalized communities I am committed to doing the work and I hope you join me.

Elsewhere, some celebrities effectively supported the movement by directly lending their platforms to amplify the voices of important activists. On her Instagram page, singer Janelle Monae stated, “I do not consider myself an activist or an organizer. I have a platform, yes, but there are people who are really about that [activism] life daily” and encouraged Black and Black LGBTQ+ activists to comment the names of their organizations along with the ways they needed support. Singer Selena Gomez, who holds the 6th most followed profile on Instagram with 181 million followers, played her part by ‘‘highlighting influential leaders and giving them a chance to take over [her] Instagram.’’ Individuals like Alicia Garza, the co-founder of Black Lives Matter, and Stacey Abrams, an author and former Democratic Leader in the Georgia House of Representatives, relayed their knowledge and experiences fighting for justice and equality for Black communities via live Instagram videos on Gomez’s profile.

By utilizing their large followings to directly promote important information from those at the forefront of the movement, Monae and Gomez did what many other celebrities failed to do. They removed themselves and their personal image from the narrative to feature those who are more qualified to speak on behalf of the movement and therefore warrant the attention granted by such large public platforms.

The involvement of public figures in socio-political activism has always been a powerful way to relay information to the general public, which is often significantly influenced by the work and content shared by the musicians, actors, and other celebrities they adore. However, as with the current movement for anti-Black racism, star power should not overshadow or undermine individuals who have dedicated their lives and work to foster tangible change in their communities for the causes they hold closest to their hearts.

At their core, celebrities are imperfect humans who will always be scrutinized regardless of what they do or do not say. In this context, however, fans should put less focus on their favourite celebrities and instead open their ears, hearts, and minds to the essential work that has always been done by Black activists. Listening to Black voices and experiences while trusting the dedication and insight that they bring is all but crucial at this pivotal moment in history.

Teresa is a U3 student studying Economics and International Development. She was born in Kenya, has lived in six different countries and speaks four languages. Her main interest lies in issues related to development, politics and economic growth in Africa and South America.