State of the Union Address – What Comes Next? 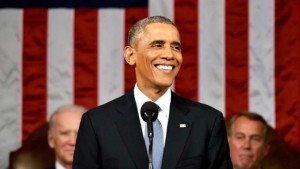 This past Tuesday night, President Obama delivered his final State of the Union address to the entire nation. For those of you who aren’t familiar with this address, take a look at this informative website produced by the US House of Representatives. The State of the Union address outlines the President’s goals for the coming year. Obama focused on issues such as immigration, the economy, alternative sources of energy, and religious tolerance. He also made not-so-subtle jabs at current Republican candidates such as Ted Cruz and Donald Trump when mentioning the status of Muslims in America. The address is ultimately important to the election as a whole because it lays the foundation for the policy issues candidates will discuss and debate.

The address was also significant because of the members of the audience (and lack-thereof) – President Obama made the conscious decision to leave an “empty seat” to symbolize victims of gun violence, in light of his most recent executive actions. This final State of the Union address reminded me of the 2008 campaign-era Obama that we all loved so much – he has a certain sense of energy and light that I haven’t seen in years. I am beyond excited to see what sort of actions he will take in the next twelve months.

What did you think about Obama’s last SOTU address? What will come of it? Last but not least, here is my new favorite video from CNN entitled “The State of the Union Address as a Wes Anderson Film”.