Syria: Those Left Behind 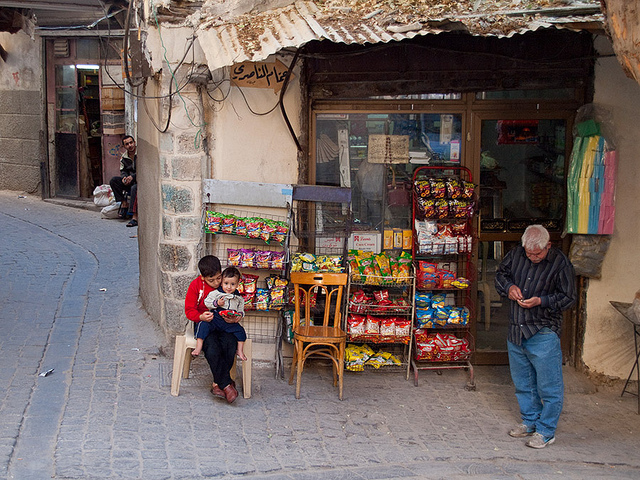 More than 11 million people have been killed or forced to flee Syria due to the ongoing conflict and around 6.6 million are left behind. They are the internally displaced persons (IDPs) of Syria. This article discusses why they chose to and, in many cases, were forced to stay.

Interviewing the IDPs who left rural areas and headed to the cities, a BBC reporter asked those brave enough to walk the streets of Damascus one main question: why? The interviewees have left their homes behind and have been pushed from the peripheries into the cities for safety and for the little work and resources they can find–perhaps even for companionships. Syria’s once great hubs, like Damascus, are now rubble and ghost towns. Whether due to patriotism, cynicism, or simple poverty, those left behind are being interviewed, thanks to the ceasefire, which has allowed for journalists and Syrians to feel more comfortable with the interview process.
Citizens of Syria have taken the recent ceasefire to their advantage and are increasingly patriotic to their home. Many war-torn cities, including parts of the city of Tal, have shown resilience. In the areas where there are no signs of war, families have been able to rebuild and fix the damage due to the security that check points have provided. However, extremism and terrorism are still present and citizens hear of the deaths of loved ones on a daily basis. The morale remains low and humble despite some changes. The main thought that crosses the inhabitants of Damascus is that they are going to die, but they had “better die at home than in exile,” said one Syrian woman.

Staying is not always a choice of bravery. Many men hide indoors so as not to be conscripted by the army, since Assad’s regime is still present and re-grouping. The idea of leaving and reaching a safe haven filled with the necessities of food, water, shelter, and, dare it be said, education is wonderful. But it is a pipe dream due to the continued antagonization of refugees in Turkey and Europe. Recently, Hungary suspended its participation in the European Union’s agreement to accept refugees, and its police forces have stopped refugees entering the country by train. A refugee certainly would not want to go all that way only to be sent back, or to be relocated to a more inhospitable camp like those in Greece. With Hungary’s decision reflecting the view of many Europeans, who is to say that other states will not follow?
Even with a promised Shangri-La, the costs of making it out of the war zone, and specifically ending up in Europe, can be too high. To make it to Europe, a Syrian needs at least $3000 (US) With the Syrian pound having dropped drastically, the money is not there, especially for those in poorer peripheral regions of which many have been ransacked by Daesh. These impediments make for too large a risk if refugees are sent back or are not granted basic human rights. This dire situation is already exhibited by Lebanese Palestinian refugees who have lived in tents for decades and still do not hold Lebanese citizenship. No better is promised to Syrians. Therefore, after a basic cost-benefit analysis, many Syrians cannot even think of leaving.

Looking closer at the words of Syrian IDPs, where as many as 9,500 are displaced every day, there is little hope, or even recognition. Assad refuses to call them IDPs, but instead simply terms them as temporarily displaced persons. Assad does this to circumvent the responsibility that a government has to care for IDPs, which is dictated by international law. International aid is also bare, as NGOs or the UN cannot go in without the regime’s permission.

At least, that’s how it was before recent developments in the area have meant that the World Food Program, a branch of the United Nations humanitarian aid system, has pledged to donate $675 million  to fully restore food assistance to Syrian refugees in Jordan, Lebanon, Iraq and Egypt until the end of the year.

These funds will allow the agency to provide nutrition to families inside Syria from April until October, many of whom depend on the WFP to survive. All in all, the aid is brightening up the lives of the IDPs, but the need for a greater effort remains present.