The Geo-economics of Syria's Reconstruction 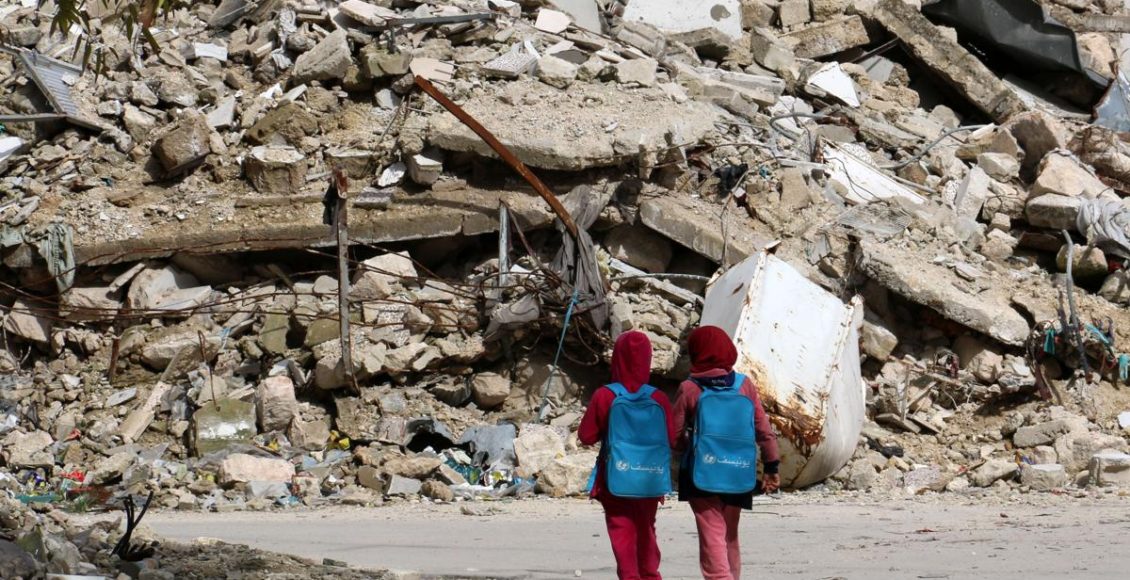 The Assad regime has survived the Syrian civil war. ISIS is defeated. Arab Spring-era resistance groups like the Free Syrian Army are crumbling. The Trump administration’s military withdrawal has apathetically (and recklessly) abandoned its Kurdish allies. Thanks to military support from his allies in Tehran and Moscow, Bashar Assad will not meet the same gruesome fate as Libya’s Muammar Qaddafi and Yemen’s Ali Abdullah Saleh. Despite the on-going conflict, Assad has released his plans for reconstruction. However, current Syrian urban planning and counter-terrorism laws virtually exile citizens seeking refuge abroad and evict those opposing the regime at home.

After eight years of total war, Syria is in ruins. Cities have turned into ghost towns. Families have been separated or even wiped out. Sectarian polarization has turned childhood friends into sworn enemies. Rogue remnants of ISIS and other jihadist groups are still active. Half a million people have been killed. More than half of the population are displaced. This degree of destruction won’t be easy to clean up.

Grand-scale reconstruction costs are uncertain, with vague estimates between $300 billion and $1 trillion. Expected completion timelines are projected in the decades. While Assad promises piercing skyscrapers, commercial hubs and luxury housing, the financial reality is that Damascus’ pockets are bloody, bullet-holed and empty. Assad has exhausted Syria’s foreign exchange reserves, taken on enormous war debt to finance his regime’s survival, and has a total state budget of $9 billion with only $1 billion allocated for reconstruction. In Aleppo, the World Bank estimates that it would take six years of continuous work just to clear 14.9 million tonnes of debris. At the current rate, without any help, Syria’s complete reconstruction to pre-civil war conditions is impossible. Syria’s future is now in the hands of the international community.

For Assad, the problem is that there are few countries that are even willing to work with him. The European Union and the United States have categorically denied any aid in reconstruction efforts unless political concessions are made by Damascus – primarily that Bashar Assad’s blood-Ba’athist regime step down from power. That isn’t going to happen. Assad has maintained his grip on power and may be the last man standing when the civil war eventually ends. To Assad, giving up power now – after surviving a rogue caliphate, US intervention, and eight years of civil war – would be a death sentence. The Arab League and the White House have also called on Assad to stop working with Iran. That is also unlikely as Tehran has been an unwavering bank-roller to the Assad regime throughout the civil war.

As the Islamic Republic’s closest historic ally, the Assad regime’s survival is mission-critical to Iranian security interests in the region. Over the past eight years, Iran spent $6 billion dollars annually to maintain the Assad regime via financial and military support. Iran has over 70,000 troops deployed in Syria, primarily made up of the Al Quds forces, Hezbollah, Shiite militias and foreign mercenaries. The Syrian Ministry of Economy has also announced that Iranian public and private companies will be granted priority in Syria’s reconstruction projects. Tehran has already pledged $8 billion reviving Syria’s mobile and communication networks, and has revealed plans to rebuild Syria’s Dara’a province – the country’s southernmost province that strategically borders Israel and Jordan. The Assad regime is now politically and financially indebted to the Islamic Republic.

In addition to Iranian support, Russia’s diplomatic and military support has also been critical to Assad’s regime survival. Russia used its veto power in the United Nations twelve times to prevent war crime investigations, economic sanctions and military intervention against the Assad regime.  Moscow’s intelligence and military support also gave the Syrian military an edge against anti-regime forces. Despite its support for the Assad regime, Russia has already declared ‘mission accomplished’ in Syria and emphasized that the Kremlin will not take part in the re-construction process. After the US’ failed efforts following the Iraq War, Putin realizes that nation-building is a politically risky and economically draining business. While the Kremlin isn’t excited by the idea of re-building Syria, it is lobbying the United Nations to take part in the reconstruction process. Russian businesses have also started to position themselves in Syria’s natural resource industries, securing lucrative energy contracts in oil & gas, electricity, and phosphate. Still, Russia is far from committed to Syrian reconstruction.

As things stand right now, Iran looks to be the only country that is willing to work closely with the Assad regime. That won’t be enough. Amid international sanctions and restricted oil sales, Iran does not have the economic capacity to keep up its financial support, especially as much of its economic injections into Damascus are loans – which won’t be paid back any time soon.

Despite the financial uncertainty, Assad is moving forward with the reconstruction process to consolidate his authority in re-taken territories. After civil wars, this can only be done by providing citizens with essential necessities such as food, water and electricity. While the Assad regime is currently struggling to provide public services, in the long term, it may be the only faction left in the civil war that can actually do so. Syria has opened strategic trade routes with neighbors Lebanon and Jordan for consumer and agricultural goods. Russia and Iran have also made energy investments to aid in electricity production and gas. While the Assad regime may hold a monopoly over public services in the long term, are they going to make it easier for refugees to return? No.

With half the Syrian population internally displaced and millions fleeing abroad, the Assad regime is re-shaping Syria’s urban planning laws to create new demographic realities. Last year, Assad instituted Law 10, which authorizes cities and towns across Syria to designate areas in their administrative boundaries for demolition and subsequent reconstruction projects, and to form real estate companies to implement said projects. The implications Law 10 has on the integrity of civilian property rights, especially for refugees, are troubling. Once an area has been chosen and a real estate development decree issued, property owners are required to present proof of ownership to the government within a year (previously a month). Property is then evaluated based on market price – which, under given conditions, is extremely low – and owners are issued shares in newly formed public-private real estate companies. If the owner is unable to physically present the proof of ownership or is affiliated with the opposition, the land is confiscated by the government or sold on a public auction.

For refugees, returning to Syria to present proof of ownership is a suicide mission. Male refugees will be arrested for escaping mandatory military conscription during the conflict. Others who took part in anti-regime campaigns are also likely to be imprisoned. Many were forced to leave the country under duress and somehow being able to fund their return home and present proof of ownership is close to impossible. Before the civil war, 40% of the Syrian population lived in informal settlements that did not require proofs of ownership. Most refugees who previously lived in formal housing, understandably, didn’t take their land deeds with them. Aleppo, Ghouta and Homs were the first theaters of the uprising and served as faction strongholds during the civil war. Now, under regime control, select districts in the war-ravaged cities are the first to be ‘redeveloped’ under Law 10. In Homs, a former rebel stronghold where less than 50% of the population remains and most of the city is in rubble, residents are barred from claiming ownership of their homes, leaving them with no alternative housing or real estate dividends.

For the Assad regime, Law 10 serves four purposes. First, it allows Damascus to begin reconstruction efforts in specific areas across Syria that serve political or economic interests. Second, the law allows Assad to consolidate his power by repopulating areas with regime loyalists. Third, it is a source of income for the Ba’ath regime and enables them to reward loyalists with valuable real estate projects, land and reconstruction tenders. Lastly, the law also acts as a vetting mechanism for returning refugees who are perceived as traitors by post-uprising anti-terrorism laws, and also strips political opponents at home of their assets. On top of all this, money for redevelopment is only being allocated to areas where Law 10 will hit the hardest.

As Syria searches for investors, reconstruction projects are currently limited to specific, primarily anti-Assad, districts in and around Damascus. For now, it seems that Iran may be the only country that will aid in reconstruction, though they are economically unable to cover even a fraction of the cost. Unwilling to have a black hole in the Levant, the Gulf states are starting to normalize relations, and as calls for Syria’s return to the Arab League continue, it is possible that the likes of Saudi Arabia may get involved in reconstruction efforts to counter Iranian influence in Syria. Assad may use Law 10 as a bargaining chip with the West so as to bring in reconstruction investment in exchange for making it easier for refugees to return, whether they want to or not.

The psychological trauma and sectarian cleavages from the war will never leave the hearts and minds of Syrians at home and abroad. Bashar Assad is not Syria’s savior. In his efforts to maintain power, he destroyed it. History will remember Bashar Assad as Ozymandias personified; a ruler who, in the end, reveled in his might, alone, surrounded by nothing but the lone and level sands of the Levant.