A Tale of Two Cities: Bridging the Gap Between Canada-US Trade 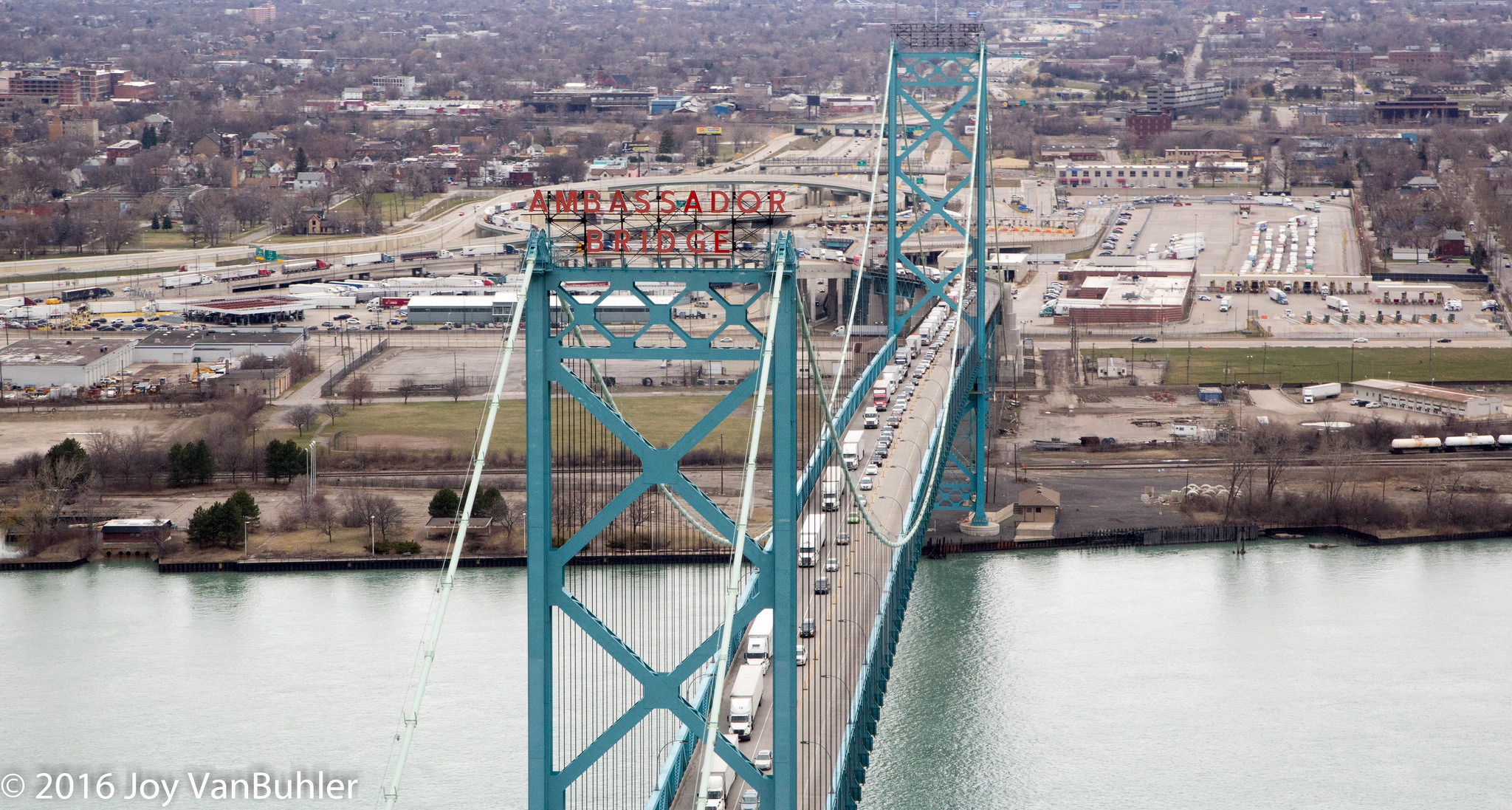 Spanning the short distance between Windsor, Ontario and Detroit, Michigan, the Ambassador Bridge is among the few structures in the world to serve as a shared landmark in two cities. Central to both cities’ skylines, the half-kilometre long span resembles the famous Golden Gate. Its name, “Ambassador”, serves as a reminder of both the friendship and shared mission of Canada and the United States. However, upon closer inspection, the illusion of grandeur quickly fades, and its sorry state of disrepair becomes clear. Its guard rails rusted through, rushed repairmen have resorted to temporary concrete barricades and plywood supports in lieu of actual safety precautions. Below the bridge, bits of cracked concrete litter Windsor streets, dissuading people from walking or driving beneath, for fear of injury.

It would be premature to dismiss the Ambassador Bridge as another symbol for the rise and fall of what was once one of America’s greatest metropoles. Although this observation would not be unfair – the bridge, like so much of the infrastructure in North America, being in dire need of repair or replacement –  issues with the bridge extend far beyond the structural. Rather, the geopolitical significance of the bridge makes its critical need for repair seem like a few potholes in comparison.

The border crossing at Windsor-Detroit is one of the most important land links between the United States and Canada. Around a quarter of all Canadian-American trade crosses the Ambassador Bridge alone, supporting the highly integrated supply chains of the North American automobile industry. This amounts to several hundreds of billions of dollars of trade each year, transported across the border in the  eight to ten thousand trucks that cross the bridge each day.

It does not take a complex understanding of economics to realize that centralizing a quarter of bilateral trade on a single piece of crumbling infrastructure, on which Transport Canada has implemented emergency repair directives, is anything less than a financial ticking-time bomb. In fact, this disaster has already played itself out once before: increased border security following the terror attacks on September 11th, 2001 in the short term made crossing the bridge a full-day endeavour. Long-term, anti-terror security measures added since still makes shipping goods across the border 9% more costly, and delays still cost businesses $800 million a month. If the bridge were to collapse in some unknowable disaster, the cost to Michigan and Ontario combined would total $3 billion a month.

It may therefore come as a surprise to learn that a single corporation owns this vital economic artery, privately owned by Manuel “Matty” Moroun. Through his control of a quarter of Canadian-American trade, Moroun has earned his way to be listed in Forbes’ 400 richest people in America. Private ownership of this connection has not been good for the Canadian or American governments, nor for the free flow of goods and services. Safety concerns are only exacerbated by the fact that Moroun frequently refuses to cooperate with either government, barring American federal engineers and withholding the results of his own third-party inspections.

It is in this climate that the Canadian federal government in 2011 under the leadership of then-Prime Minister Stephen Harper, alongside Michigan Governor Rick Snyder, announced the construction of a second road link, soon to be named the Gordie Howe International Bridge. However, this decision was not without controversy – Snyder had to go behind the back of the Michigan legislature to approve the project, which had voted to deny all funding to construction. Moroun’s hands were not clean in this decision, relying on his political clout in the state’s capital, employing armies of lobbyists and spending 1.5  million dollars in campaign contributions to save his monopoly.

However, the bridge being a number-one priority for the Harper government, the Canadians  soon announced that they would be financing Michigan’s full $550 million share of the costs. Moroun, however, did not relent, attempting in 2011 through political maneuvering and intense campaigning to introduce a clause to the Michigan Constitution that would require the construction of the bridge to be put to a referendum. Defeated, Moroun then attempted to sue both the US and Canadian Governments for “destroying” the value of his bridge and interrupting the “perpetual and exclusive franchise right” in an attempt to eliminate his competition. In 2015, the Canadian government was dealt another blow, when the American federal government refused to finance the construction of its border checkpoint and customs plaza. The Canadian government therefore took on another $250 million in expenses, remaining as committed as ever to keeping Canada open for business.

Since at least 1990, however, Moroun has planned to build his own second span, directly adjacent to the current Ambassador Bridge. This required the purchases of over a hundred Windsor homes, now left abandoned and falling into disrepair as Moroun has awaited permission from the Canadian government. In the meantime, however, Moroun singlehandedly transformed Windsor’s historic Sandwich Towne (the location of the residential homes) into a blighted neighbourhood. The Canadian project is not without its human costs either. Not unlike the consequences of Moroun’s project, the Gordie Howe Bridge would run through Detroit’s historic Delray neighborhood. An estimated 250 families will be forced to move, and another 2000 remaining residents will have a major international crossing placed in their backyards.

In September 2017, after years of litigation and lobbying, and even more years of bad blood, Moroun was finally granted a permit by the federal government to build his second span, to the dismay of Windsor residents and business owners. This permit was granted only  under the condition that the current Ambassador Bridge be torn down within five years upon completion of the new span. The federal government, nonetheless, remains committed to completing Gordie Howe.

With talks surrounding the North American Free Trade Agreement (NAFTA) captivating media attention, the debate over a few bridges may seem inconsequential. However, Canada has demonstrated a great willingness to concede on this project, absorbing rising costs and embracing once-bitter rivals. Tracing the history of this conflict is therefore an important indicator of what Canada is willing to do, and perhaps more importantly, willing to give up in the name of free trade. With both crossings set for completion in the coming years, only time will tell if they will help to usher in a new era of North American cooperation, as envisioned.