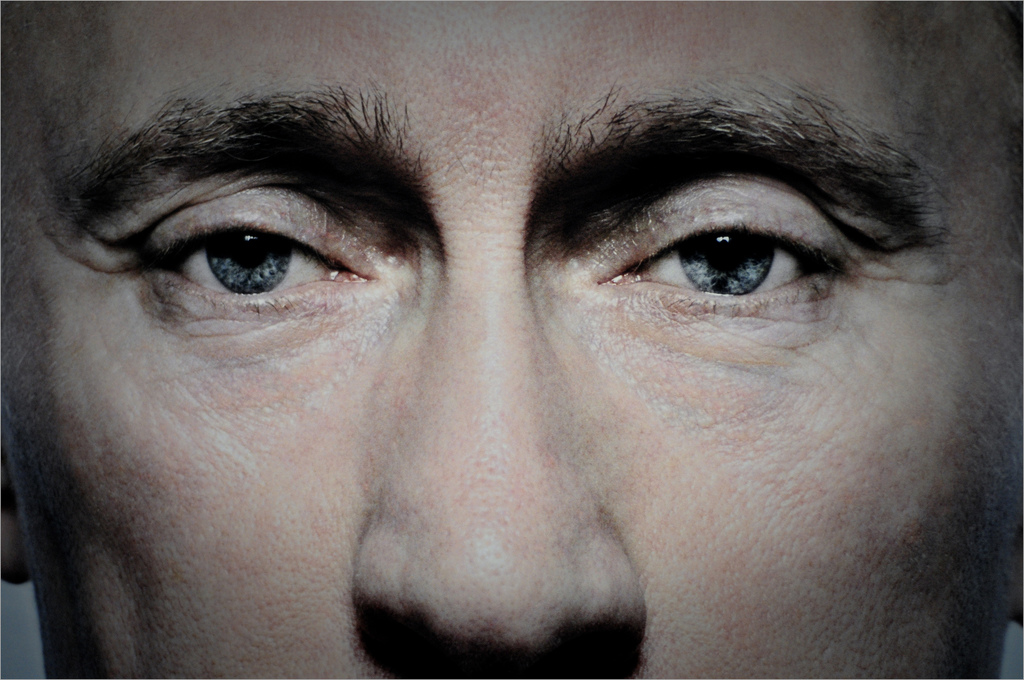 The death toll now reaches six thousand in Ukraine thanks to the biggest diplomatic crisis since 1989. From the demonstrations in Maidan Square in Kiev to the annexation of Crimea, since November 2013 diplomacy between Russia and the West has been at its lowest point. Though until now it seemed as though the most aggressive part of the fight happened under the table, Vladimir Putin took the conflict to a new level through a documentary broadcasted on Sunday March 15th on the public TV network, Rossiya 1. Mr Putin might have been gone for a few days (1) but he is back in town, and he has something to say to the ‘enemies of Russia’.

His first statement which was largely reported in international media was the announcement explaining that Russia had been ready to mobilize nuclear forces if the “worst possible outcome were to arise” (2).

Putin positions himself as the saviour of all Russian-speaking communities. It’s not about being the president of Russian citizens, but of all Russians. We can almost hear a marxist tune here, “Russian-speakers of all countries, unite!”. Russia had positioned missile batteries on the Crimean coast, dissuading possible American support to the pro-EU Ukrainians. The Russian president also explains this decision, saying that he did not know whether the West would intervene, saying “this is why i was obligated to give out the necessary directions to our armed forces (…), to give out orders on the behavior of Russia and our armed forces in all circumstances” (2).

Maintaining a desire to entice Russian-speakers, he explains having had a discussion with his western colleagues:”I told them it was our historical territory, that Russians lived there, that they were endangered and that we could not abandon them” (2). He goes on saying that this position was sound and this is why no one had wanted to cause a “worldwide conflict” in response (2). Often interrogated on the Russian troops present during the Crimean referendum, he responds that the presence of the armed soldiers’ was to avoid a bloodshed. He explains “The final goal was not to take Crimea or its annexation. The final goal, was to give people the ability to express themselves on how they want to live in the future” (2). He also admits to having organized the extraction of ex-president Viktor Ianoukovitch from Kiev; leaving the capital at the hands of the pro-west demonstrators.

Putin claims that “even without Crimea or Ukraine, the United States and their allies would have invented something else in order to slow down Russia’s opportunities” (3). He grumbles against the West, that is, in his eyes, claiming too much power. The leader explains that the Russian army is “modern, redoutable, ready for combat” (3). Throughout the documentary he uses many different historical metaphors, one of them being “Hitler got ready to annihilate Russia and to repel us back into the Urals. Everybody has to remember how this kind of thing ends” (3). In short: Vlad’s mad at Obama and his friends, and if they want to fight it out, he’s waiting for them.

On the economic level, the president’s declarations show a will to liberate Russia from the international system. He announced his determination to free the country from its dependency on foreign technologies and industries. He mentions amongst others, transports, food, and energy industries; he also calls to Russian businessmen to repatriate their capital to Russia. Indeed, in 2014 capital flight caused a loss of 151 billion dollars to the country (4). Putin explains that the government is not interested in the origin of those funds, he simply asks to have them repatriated to Russia, no questions asked.

To these declarations is added Putin’s diplomatic choices. A perfect example of the leader’s vision as well as the tensions between east and west is that of the May 7th ceremony. This ceremony celebrates the “victory of Russia against Nazism”. Two aspects of this ceremony are especially relevant.

Firstly, the North Korean-Russian rapprochement. Indeed, May 7th should stand out as Kim Jong-un’s first official trip abroad as head of state (5). The North Korean leader is trying to decrease his dependency on China. De facto, since the arrival of Xi Jinxing the Sino-North Korean relationship has degraded. Jinxing has publicly critiqued Pyongyang’s provocative military exercises. The Chinese leader has not even taken the time to meet with his North Korean counterpart since his rise to power (6). Furthermore, during the scandal caused by the American movie “The Interview”, Russia stated that it understood Kim Jong-un’s anger. This friendship with Kim Jong-u’s regime is valuable to Moscow as it could permit the construction of a gas main through North Korean territories facilitating its exportations of natural gas to South Korea (6).

Secondly, the the West has failed in resisting Russia. François Hollande, Angela Merkel and David Cameron declined the Kremlin’s invitation to join the ceremony, a way to contest Mr. Putin’s actions. However, Madam Merkel will nonetheless travel to Moscow days after the ceremony in order to pay her respects to the unknown soldier’s tomb, accompanied by Putin. Downing Street as well announced that Prime Minister David Cameron will not be attending the ceremony either, adding however that a representative of lesser importance might be attending the event, depending on the evolution of the discussions with Russia, explaining that they are still worried about its actions in Ukraine (7).

So should the West fear Russia? There aren’t any valid answers to this question just yet. On the

European plan, the leader calls out the Russian-speaker as if they were a Russian citizen. This strategy is a definite reminder of the days of satellite states. He also repeatedly distances himself from the West, overly critical of its politics. On the national economic level, he seems to be closing Russian borders, calling for the repatriation of expatriated capital while chanting “our development depends first and foremost on ourselves” (5). Finally, on the international level, his public proximity to North Korea shows a will to compensate the closure of Western borders with an opening on the Eastern part. Overtly aggressive and critical of the West, agitator when inviting heads of State to celebration of Russian victory over Nazism, and seducer of Russian-speaking populations: Vladimir Putin is publicly using strategies familiar to history, leaving an aftertaste of Cold War in our mouths.