THAAD: A Tale of Four Countries 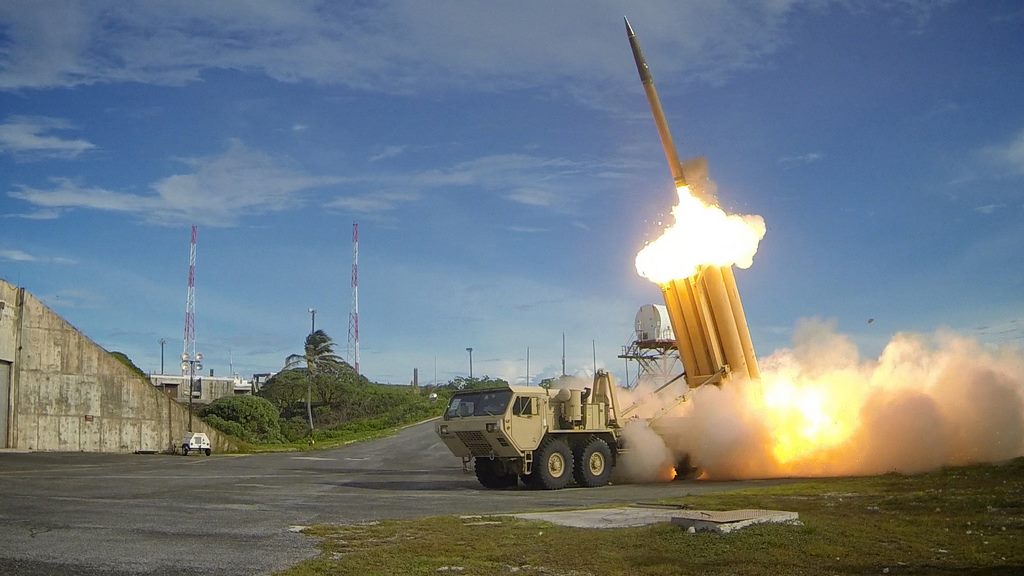 Amidst western cacophony surrounding the rise of a new radical right in European elections, a new U.S. travel ban, and the unveiling of Republicans’ now-defeated bill to repeal Obamacare, on March 6, 2017, two Terminal High Altitude Area Defense (THAAD) launcher trucks from the U.S. landed at the Osan Air Base in South Korea in preparation for deployment. Earlier that same day, North Korea launched four missiles into the Sea of Japan in a display of military strength, adding a layer of credibility to the U.S.’s reasoning for deployment and contributing to the growing list of North Korean warhead offenses in the face of global condemnation. However, the impact of the THAAD deployment in South Korea is not isolated to the South Korean-American bilateral relationship. No, the deployment will single-handedly bring the strange –and strained– quadripartite relationship between South Korea, the United States, North Korea, and notably, China, to a head. Four nations, four very different aims. Strategic diplomacy is required, lest an exacerbation of political and military tensions arise. At this point, given the instability within each nation and the highly polarized views regarding the countries’ respective national securities, such productive diplomacy simply does not seem to be in sight.

The THAAD system, first launched in the 1980s as a means of intercepting Soviet tactical missiles in their terminal phase, is capable of reaching a range of 200 km. This powerful capability is precisely what makes it simultaneously applicable as protection against potential North Korean ballistic missiles and alarmingly belligerent in the eyes of the Chinese. Beijing has framed the defense system as a “clear, present and substantive threat to China’s security interests,” citing the ability to “see” far into China as a clear undermining of its own nuclear arsenal. However, less explicit than its allegations against THAAD’s threats to its national security is a far more significant complaint against what it views as a possible hegemonic push into the Asia-Pacific geopolitical sphere by the U.S. military –a region where it sees itself as preeminent leader. The growth of North Korea’s nuclear strength and audacity has indeed provided an evident guise of legitimacy for U.S. influence. This is precisely where China’s foreign policy has failed; it has, by product of its own dogmatism, created such an opportunity for the United States to exploit.

China should recognize that the threat of North Korea’s nuclear expansion is not limited to South Korea and the United States. It must realize that it, by virtue of geographic proximity and ideological divergence, is equally at risk. The Cold War is over. And as such, China must move on from the stale and increasingly obsolete relationship it maintains with North Korea, transitioning to a cautionary approach in recognizing the indisputable danger that North Korea’s nuclear arsenal poses. The foundation of such an alliance has disintegrated, owing to deteriorating diplomatic and economic relations through the years, coupled with a simultaneous warming of Sino-American and Sino-South Korean relations. Professor Shen Zhihua of East China Normal University even goes as far to call the China-DPRK treaty “a waste paper.”

It is thus imperative that China take initiative now, for its own political sake as well as for the security of others, to break relations with North Korea. As North Korea’s largest economic partner making up 70% of the hermit country’s trade, China holds the key to what the world views as the “North Korea problem.” As North Korean émigrée Hyeonseo Lee explains, “if China stops supporting North Korea, within one week or 10 days, they can make North Korea chaos.” This could signal the downfall of North Korea’s nuclear threat.

This is all hypothetical, of course. In reality, China has done the polar opposite.

The government has instead turned its economic power on South Korea, advocating boycotts of South Korean goods and culture, punishing its firms operating in China, and discouraging Chinese tourists from visiting its northern neighbor. And as South Korea’s largest market for exports, the impact of these sanctions will not be felt lightly in South Korea.

Now, more than ever, China must do the opposite; move on from history and fully extricate itself from North Korea in order to seek stronger alliances with South Korea and the United States. North Korea’s nuclear threat is clearly becoming a very real one, and China must secure a position on the side of strength, not isolation. Its actions thus far, however, indicate a missed opportunity to further consolidate its status as a world and hemispheric leader. By making no moves to contain North Korea and allowing the unrestricted growth of its nuclear arsenal, China has effectively run itself into a corner –a place where it has failed to live up to its role as leader and police of the Asia-Pacific and where it has legitimized a significant U.S. push into Asian affairs.

Regarding South Korea, no clear stance on the deployment of THAAD has been made on their part, given the current state of political chaos following the impeachment of President Park Geun-hye earlier this month. Such political upheaval and lack of current leadership in South Korea only further strengthen North Korea’s position and audacity. The United States itself is also facing significant internal issues, dealing with the recent transition of presidential power and the controversial policies advocated by President Trump. Furthermore, Secretary of State Rex Tillerson has failed to assert an effective U.S. hard line on THAAD. These conditions all play into North Korean hands.

Thus, it could indeed be mutually beneficial for the three countries –China, South Korea, and the United States– to further their alliance and move in conjunction against the rogue nation led by Kim Jong-un. As it stands, however, it would seem that the U.S. has risen as the major winner from this THAAD dispute, gaining yet another legitimate military presence in the Asian sphere and appearing as a proactive, global moral authority in contrast to China’s rigid dogmatism and perceived non-cooperation.

As for North Korea, one can only guess at their intentions, which makes the future of the quadripartite relationship both unpredictable and crucial for the future stability of world order.