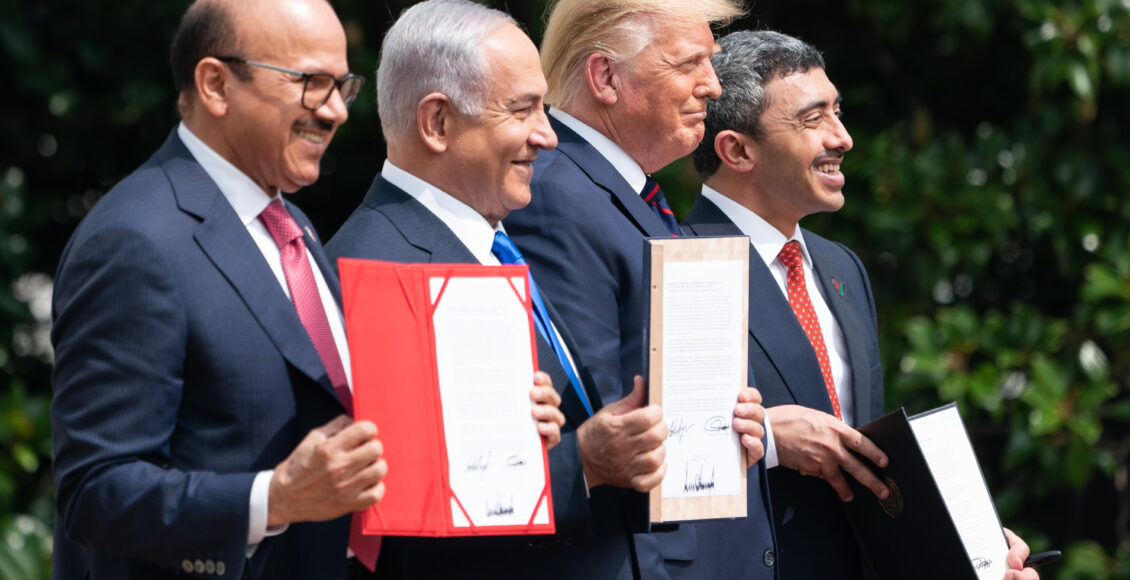 In September 2020, the United States brokered the Abraham Accords Declaration between Israel, the United Arab Emirates, and Bahrain. In a joint statement, the three Middle Eastern nations agreed to normalize diplomatic relations and pursue peace and prosperity in the Middle East. This marks a significant step in the progress of political relations between Israel and its neighbouring Arab states, with the UAE and Bahrain becoming the first Arab countries to normalize relations with Israel since Egypt and Jordan did so in 1979 and 1994 respectively. At face value, the Abraham Accords appear to be a historic diplomatic achievement that will promote peace, stability, and international cooperation in the Middle East. However, backroom arms deals and an underlying anti-Iran sentiment from the four countries involved in the Accords paint a much darker picture of the motivation behind the Abraham Accords.

In their official statement, the signatories of the Abraham Accords publicly declared their shared goal of “realiz[ing] the vision of a Middle East region that is stable, peaceful and prosperous, for the benefit of all States and peoples in the region.” Nevertheless, by drawing Israel, the UAE, and Bahrain together, the Abraham Accords are creating a new regional coalition to counteract a shared enemy: Iran. The Islamic world is largely polarized along religious and cultural lines with an Arab-Sunni population led by Saudi Arabia rivaling a Persian-Shia population led by Iran. As Sunni-ruled countries, the UAE and Bahrain are part of the coalition of Arab states that have a vested interest in containing Iran’s growing influence in the Middle East. Israel and the United States, on the other hand, predominantly fear Iran’s nuclear and military capabilities, which could endanger Israel and threaten American interests in the region. While the Abraham Accords openly promote cooperation among its three Middle Eastern signatories, they also provide the impetus for further military escalation in the region along anti-Iran lines.

The United States did nothing to hide this goal. Shortly after the Abraham Accords were signed, the Trump administration approved a $23.37 billion USD arms deal with the UAE which includes the sale of 50 F-35 fighter jets and 18 armed Reaper drone systems. US Secretary of State Mike Pompeo went so far as to clearly link the Abraham Accords to the massive arms deal. In the State Department’s announcement of the weapons transaction, he stated that “the Abraham Accords offer a once-in-a-generation opportunity to positively transform the region’s strategic landscape. Our adversaries, especially those in Iran, know this and will stop at nothing to disrupt this shared success.” Israel has long been opposed to any arms deals that would threaten its military dominance and safety in the Middle East. In fact, American law ascertains that arms sales are illegal if they weaken Israel’s “qualitative military edge” over neighbouring states. However, even Prime Minister Benjamin Netanyahu is said to have privately supported the arms deal with the UAE as part of the wider diplomatic talks surrounding the Abraham Accords, although he publicly denies these claims. As such, the Abraham Accords can hardly be called a peace deal. Rather, they may mark the beginning of a new age of Middle Eastern tensions.

The future of the Middle East

Clearly, the arms deal accompanying the Abraham Accords signals a paradigm shift in Middle Eastern politics. The primary regional opponent to Sunni-led countries, such as the UAE and Bahrain, is no longer Israel. Instead, it is Iran. The perceived threat of Iran is such a concern, that the UAE and Bahrain feel compelled to soften relations with their former Israeli rivals. The effects of this rapprochement and increasing anti-Iran polarization will have widespread and multilayered impacts for years to come. Notably, as more Arab countries begin to normalize relations with Israel, Palestine’s regional support is beginning to fade. Palestinian officials immediately condemned the Abraham Accords and the Palestine Liberation Organization (PLO) called it “another treacherous stab to the Palestinian cause.” As such, the establishment of the Abraham Accords has tilted the balance of the Israel-Palestine conflict even further in Israel’s favour.

The Abraham Accords have also created a new political landscape in the Middle East that will impact future diplomatic relations in the region. In January, President-elect Joe Biden will be inaugurated and his administration will begin to pursue a foreign policy that is vastly different from that of his predecessor. Biden has stated that he wants to rejoin the Iran nuclear deal, rather than continue Trump’s hard-line “maximum pressure” campaign that seeks to force Iran’s capitulation to American demands through the use of sanctions. However, the Biden administration will now need to be more conscientious of America’s newly-developed relationships with countries such as the UAE and Bahrain before taking any action on Iran. In an interview with Axios, Bahrain’s foreign minister stated that, after the establishment of the Abraham Accords, Biden must now consult the Gulf states before renegotiating the Iran nuclear deal. As such, any future US-Iran negotiations will be complicated by the vying interests, abilities, and needs of Bahrain and the UAE.

Although the Abraham Accords have made a positive impact on the diplomatic relations between Israel, Bahrain, and the UAE, they have also ignited old and new tensions in the Middle East. When we consider Iran’s rising power in the region and its efforts to develop nuclear weapons, the Abraham Accords can be seen as the veiled harbinger of an anti-Iran coalition in the Middle East. However, this motivation behind the Accords does not appear overly surreptitious given the immense arms deal between the US and the UAE.  Undoubtedly, the impacts of the Abraham Accords have quickly spread beyond the direct relations between Israel, the UAE, and Bahrain. These Accords have been described as a revolutionary diplomatic agreement, but there is more to this than meets the eye; whether or not they bring lasting peace remains to be seen.

Featured Image: “Signing the Abraham Accords” by The White House is in the public domain.

Adam Steiner is a U4 student pursuing an honours degree in Political Science with a minor in Statistics. Adam has written numerous articles about North American and European politics, and has an interest in healthcare and health policy.