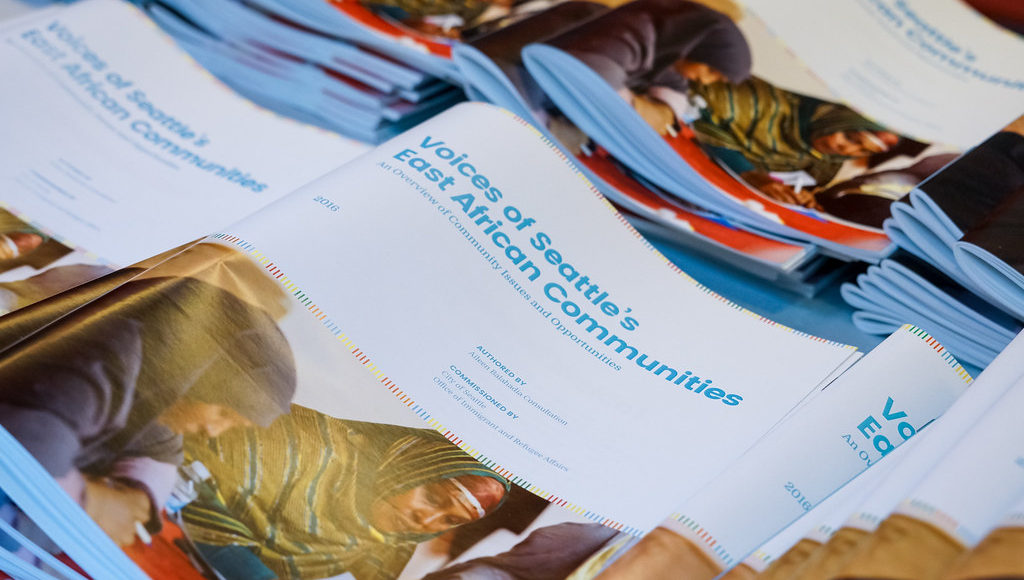 On October 4, 2019, the Concordia African Studies Working Group, in partnership with the African Studies Program at McGill University, presented a panel on the ‘Role and Prospects of Diaspora Engagement in Rapidly Urbanizing Africa’. This interactive panel was part of the 2nd annual Concordia-McGill African Studies Conference, which brought together academics, researchers, and business professionals from various fields to discuss Africa’s increasing urbanization and its implications for the continent. This particular panel, however, diverged from urbanization to consider the role of the African diaspora in promoting social and economic development in Africa. The four panelists shared their personal experiences and perspectives on the often overlooked activities of the diaspora community. The panel particularly emphasized how diaspora members could effect positive change in their respective home countries from abroad.  In considering the diaspora’s global impact, the most significant contributions lie in the high influx of remittances to Africa, the application of external knowledge and resources to local business initiatives on the continent, and the role of diaspora members in shaping foreign governments’ policies towards Africa.

According to the World Bank, remittances to sub-Saharan Africa were estimated at $46 billion in 2018. Remittances have long served as an important way for people working or living abroad to improve access to healthcare, education, and financial services among poor or low-income individuals in their countries of origin. Although remittances usually benefit the immediate relations of the sender, members of the diaspora such as Grace Camara, a London-based lawyer of Sierra Leonian descent, have found ways to use them to yield a broader developmental impact. In 2019, Camara founded Remit Fund, an organization that allows members of the diaspora to commit a share of their remittances to fund ‘‘ethical investments’’ in social and economic development ventures. Contributions to Remit Fund helped Sydney Davies, a talented fashion designer and fellow diaspora member, attain the necessary capital to establish a manufacturing facility in her home country of Sierra Leone. This in turn created fifty jobs for people in the village where it was situated, thus showing how diaspora involvement can improve the livelihoods of ordinary people on the continent.

A recently announced partnership between RemitFund and DiafrikInvest, an organization that fosters entrepreneurship within diaspora communities and connects diaspora members with investment opportunities in their countries of origin. Pictured: Grace Camara, founder of RemitFund. Via: Twitter.

Despite the benefits of diaspora remittances, there is potential for the creation of a power dynamic comparable to the ‘White Saviour Complex’ that has branded some Western aid initiatives to Africa. The idea of a “Diaspora Saviour Complex” was addressed by Djamila Toure, one of the panelists at the conference and founder of Sayaspora, an online media platform showcasing the writing, art, and professional work of African women worldwide. According to Toure, diaspora members may commit to long-term remittance flows to mitigate the guilt of immigrating and leaving their families behind. Aside from the inequality and dependency that these payments may create, remittance flows are also not a definite solution to the cycle of poverty, nor are they necessarily sustainable if their benefactors incur financial hardship.

Although remittances are a vital contribution of the diaspora community, its members also use their knowledge and access to resources and technology from abroad to facilitate development in their countries of origin. Such an initiative was taken by Ezana Raswork, the Managing Director of the digital marketing platform Africa 118 who lives and works in Montreal and was one of the panelists at the conference. On one of Raswork’s trips back to his home country of Ethiopia, he identified an information gap affecting households and recent graduates from technical and vocational schools. Skilled graduates offering services such as plumbing and electric repairs were unable to find clients and job prospects that fit their qualifications. At the same time, households searching for plumbers or electricians were unable to find trustworthy individuals qualified to perform these services. Using his years of marketing and technological experience in North America, Raswork created ‘Taskmoby’, a mobile platform that connects freelance service providers with households looking for skilled and reliable individuals to carry out repair, cleaning, or other general services in their homes. The implementation of similar business models has seen high levels of success in North America, as in the cases of TaskRabbit and UpWork, and may thus prove successful in many rapidly urbanizing African societies.

Diaspora members also often possess extensive knowledge and insight regarding certain African countries, which can be useful in developing the foreign policy of their countries of residence. In Canada, the Department of Foreign Affairs and International Trade (DFAIT) has already made progress towards encouraging diaspora participation by hosting conferences and seminars involving different diaspora groups, state officials, and community actors to discuss solutions for countries plagued by long-term conflict. Notably, one of these conferences in September 2010 brought together members of the Sudanese diaspora and DFAIT officials to discuss topics such as the ongoing unrest in southern Sudan, human rights violations, and Canada’s role in the country. A report on the discussions was provided to Canadian federal agencies and organizations involved in Sudan-related issues to aid their decision and policymaking processes. This demonstrates how the perspectives of African expatriates can facilitate the creation of more effective aid initiatives addressing the specific needs of African countries.

African nations stand to greatly benefit from the expertise and resources of the diaspora community. The Concordia-McGill African Studies conference clearly showed the willingness of diaspora members to actively work towards resolving issues affecting their respective countries of origin. In the near future, the global African diaspora community will play a major part in the first African Diaspora Economic Forum in 2020, which will bring together various international organizations, state agencies, intellectuals, and financial institutions to help foster closer economic cooperation between actors in and outside of the continent. At any rate, the diaspora’s activities and contributions invite increased attention from policymakers, governments, and non-governmental organizations. If effectively mobilized, the skills, insight, and networks of the African diaspora hold great potential for accelerating social, economic, and human development throughout a rapidly changing Africa.

Featured Image by Seattle OIRA is licensed under CC BY-NC 2.0 .