The Age of Erdogan: Why Turkey Voted AKP 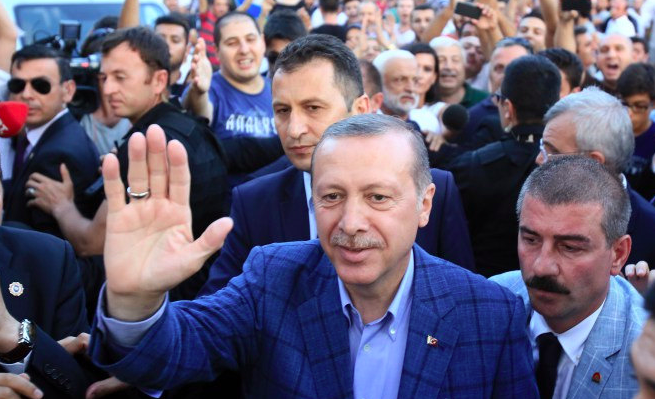 The results of Turkey’s recent parliamentary election were anything but ordinary. Within the past five months, the ruling Justice and Development (AKP) party has successfully recovered from this summer’s inconclusive election in which the party lost its majority standing. Since June, the AKP has surprisingly mobilized an additional 5 million supporters, thereby gaining the 59 representatives in the Grand National Assembly required for a majority total of 319 seats. Even senior AKP leaders were stunned by the speed with which the party rebounded from its weakened position; in-party fighting had ensued after the AKP’s loss of its parliamentary majority and as President Recep Tayyip Erdogan, the party’s founder and longtime driving force, dismissed talks of constructing a coalition and instead insisted upon holding this second election. However, the doubts surrounding the level of public support for Erdogan and the AKP have been emphatically dispelled: the Islamist party has successfully re-established itself as the dominant force in Turkish politics for at least four more years.

Despite certain controversies surrounding him, Erdogan, the former mayor of Istanbul, can be credited with pushing the EU accession process – which included reforming the Turkish constitution to align it with the EU Convention on Human Rights, promoting public primary and secondary education in Turkey, major economic reform, and curbing the power of the military. When looking at this record, combined with the reality of Turkey’s predominantly center-right electorate, it is not at all incomprehensible that many Turks still support Erdogan and his party.

For many supporters, the AKP victory came as a shock, perhaps even a miracle. To critics however, the Islamists’ entrenchment poses a clear threat to Turkish democracy. With the AKP’s control of the government and the legislature again assured, Turkey is effectively in Erdogan’s hands. Extensive constitutional and legislative reforms may follow: Erdogan has long argued for the abandonment of Turkey’s parliamentary system, established by Atatürk in the aftermath of the Ottoman Empire’s disintegration, in favor of a presidential one—presumably with himself at the helm. Concerns that Erdogan may severely weaken the Turkish political system’s checks and balances are substantiated by his publicly stated ambition to invest the Turkish presidency with a degree of centralized power greater even than that of even the American institution. Although the Turkish presidency has typically been a ceremonial position (compared to that of the prime ministership), a shift similar to what has been observed

in Russia in recent years is foreseeable in the near future. Where Vladimir Putin has succeeded in gradually molding his country’s political system into a system of one-man rule, Erdogan appears to show great interest in attempting something similar.

Throughout the AKP’s 13-year reign, the Turkish government has adopted an increasingly conservative agenda, at home and abroad. Policies that have resulted in the circumscription of freedom of expression, freedom of assembly, as well as certain other civil liberties, have been widely criticized. Turkey has long stood as the model of Islamic democracy in a region marred by violence and political turmoil, but with Erdogan’s determination to consolidate his increasingly authoritarian rule, it is unclear whether the country will be holding this distinction for much longer.

Having captured 49% of the popular vote in this most recent election,the Turkish people have seemingly given Erdogan and his AKP disciples the “go-ahead” for a rehaul of the constitution, the establishment of a presidential system, as well as the continued curtailment of their inalienable rights. But were voters truly consenting to these changes, or were they acting upon other concerns? During a recent AKP campaign rally, Erdogan warned those gathered that “it’s me, or chaos”, later expressing his “hope [that] our nation makes its choice for stability.” Not only does the Turkish electorate appear to agree with Erdogan’s dangerous logic, but Turkey’s partners in the international community seem to as well.

Erdogan has long been a controversial figure. Over the last year, Turkey has experienced an ominous intensification of the protracted conflict with its Kurdish minority, an issue Erdogan appears to have manipulated in order to vindicate the ever-increasing scope of his executive power. This June, Turkey ended its 2013 ceasefire agreement with the Kurdistan Workers’ Party (PKK) after a Kurdish terrorist attack killed two policemen. This incident has since snowballed into increasing violence and PKK terrorism in the Kurdish strongholds of southeastern Turkey. Erdogan has vowed to “liquidate” all Kurdish terrorists and has repeatedly demonized the HDP, the mostly Kurdish “Peoples’ Democratic Party” whose success in the June election limited the AKP’s ability to amend the constitution, thus undermining a significant political competitor. Additionally, Erdogan has capitalized on the distress following this October’s terrorist attack in Ankara—the deadliest of its kind in Turkey’s modern history—thereby increasing the number of domestic security forces to counter terrorist activity and, perhaps tacitly, to discourage political dissent. Perhaps most portentously, Erdogan has continued his campaign against media opposition by arresting a number of newspaper editors who have opposed his concentration of authority, and by allowing angry conservative mobs to attack the headquarters of the leading opposition newspaper, Hurriyet. With the possibility of ISIS cells in major Turkish cities, tension spilling over the border from Syria, domestic civil unrest, and renewed Kurdish violence, Erdogan has utilized the electoral strategy of intensifying domestic chaos in order to incite nationalist hysteria and to underscore the need for his strong leadership.

Violent, difficult times tend to push voters to the safest political option: usually a leader, party, or regime that promises to forcibly defend the state’s interests and those of its allies. In a modern context, this claim is corroborated by the behavior of voters in Eastern Europe, where electorates have recently begun to migrate towards leaders that arouse populist sentiment. Even France has experienced a surge of support for Marine Le Pen and the firm leadership her nationalist, far-right National Front would supposedly bring (and, given the recent horrors in Paris, this can only be expected to increase in the coming months). Although allegations of corruption, illegitimacy and xenophobia have marred the AKP’s most recent triumph, Turks have renewed their support in Erdogan in part due to the sense of security many believe his semi-authoritarian rule brings. The international community— especially the liberal democracies of the West— also appears to agree that a strongman is needed in Ankara.

In a statement released by Jean-Claude Juncker, the President of the European Commission, Brussels expressed its view that “Sunday’s [November 1st] election reaffirmed the strong commitment of the Turkish people to democratic processes”, while asserting that “the EU will work with the future government to enhance the EU-Turkey partnership and cooperation across all areas.” This year, the Commission notably toned down its condemnation of the Turkish government’s repeated human rights violations in its annual Report issued after the election. Additionally, US President Barack Obama and UK Prime Minister David Cameron have publicly congratulated

Erdogan on the extension of his presidency.

Evidently, Western—particularly European—geopolitical interests trump their liberal and moral values. Erdogan realizes that the West will remain silent on the increasingly autocratic nature of his leadership due to the stability he is perceived to bring to a region currently in flames. Although the European Commission’s recent report does express concern regarding Erdogan’s increasing disregard for “the rule of law, freedom of expression, and freedom of assembly,” it appears that Turkey’s humanitarian effort in response to the refugee crisis has overshadowed the policies that have further constrained Turks’ fundamental liberties. Although Erdogan’s authoritarianism may adversely affect —or perhaps even destroy—Turkey’s continued efforts to attain EU membership, the President’s abuses are not currently a European priority.

Western military and humanitarian interests in the Middle East retain precedence. The US and other key actors understand that Turkey will continue to play an indispensable role in the war on ISIS in Syria and Iraq, particularly by allowing NATO and American forces the continued use of airbases in south-eastern Anatolia. German chancellor Angela Merkel, widely regarded as the most consequential European leader, has met with Erdogan on multiple occasions within the past months in the hopes of constructing a joint policy for managing the tremendous influx of refugees to Europe. Essentially, the EU hopes for Turkey to become Europe’s border ( “policing zone”). As Turkey is one of the first stops on many immigrants’ journeys, it is clear Erdogan will continue to hold significant leverage in the formation of European policy. Turkey currently hosts around 2.2 million Syrian refugees—the most any state has yet managed—necessitating an outlay of millions of USD on related infrastructure. Erdogan’s administration and the Turkish people must be credited with their incredible management of the millions of refugees. While the refugee crisis has only recently hit the rest of Europe, Turkey has long been bearing the brunt of the refugees fleeing the Syrian Civil War.  Writing in an editorial recently featured in Project Syndicate, Erdogan stated, “the international community must agree on a mechanism that ensures that the burden is fairly shared.” At present, Erdogan appears to wield the influence and domestic political capital necessary to decisively shape the terms of any joint European refugee policy. As the winter months bring a lull in the flow

of migrants, it will be interesting to observe the evolution of any new agreements constructed between Turkey and the rest of Europe. And, as further details of the Paris terrorist attacks are made public and the origins of the perpetrators are revealed, this exchange will only increase in complexity.

Akkoyunlu, Karabekir.”AKP’s Machiavellian Victory: How It Happened and What It Means for Turkey.” The Huffington Post. Last modified November 13, 2015. Accessed November 14, 2015. http://www.huffingtonpost.com/karabekir-akkoyunlu/akp-machiavellian-victory_b_8544350.html.