The Battle of Hodeidah: A Decisive Step in the Yemeni Crisis 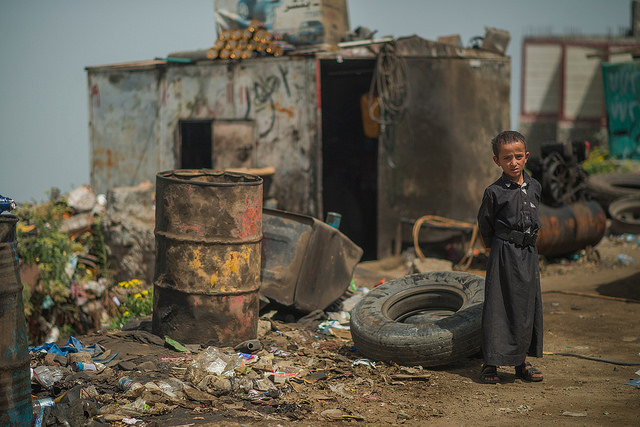 Ever since 2014, Yemen has been engulfed in a brutal civil war between the Yemeni government, backed by the Gulf Cooperation Council, and Houthi rebels backed by Iran. In the wake of the 2011 Arab Spring, Yemen’s President Ali Abdullah Saleh faced nationwide opposition, even being been injured in an attack in June 2011. Under the Gulf monarchies’ pressure, Saleh accepted a transition plan in which he accepted his departure in exchange for immunity for himself and his siblings. On February 27, 2012, the old autocrat officially ceded power to his successor, Abdrabbuh Hadi, ending his 33-year reign.  Considering this act as a treason, Houthi rebels decided to kill Saleh in December 2017.  As of June 2018, the conflict seems to have taken a decisive step with the launch of the Battle of Hodeidah, a strategic port of 400,000 inhabitants.

Located 230km from Sanaa, Hodeidah is the gateway for 80% of the country’s energy and food imports and has been in the hands of the Houthi rebellion since 2014. Hodeidah, due to its importance, is central to the preserving of lives and an offensive on the city would worsen the humanitarian crisis while millions of people are already on the brink of famine. Over the past three years, external powers such as Iran and Saudi Arabia have been competing for regional influence, exacerbating existing disputes in Yemen. In March 2015, Saudi Arabia and the United Arab Emirates (UAE), close allies in terms of foreign policy, launched a military operation called the “Decisive Storm” with the goal of disrupting the Houthis, who they consider to be an Iranian proxy. This massive joint operation supports President Hadi’s loyalist forces and claims to be working on the restoration of the rule of law in the country. In order to support its key ally, Saudi Arabia, and worried about the growing Iranian influence in the Middle-East, the United States contributes to the conflict by selling a vast arsenal of weapons to the Saudi-led coalition.

On the ground today, as part of the Gulf Cooperation Council, the UAE plays a leading role. Emirati leaders are motivated by the desire to act significantly on several fronts. First and foremost, for Abu Dhabi, it is imperative to restore a stable political, economic and social situation in Yemen in order to stabilize Emirati-controlled areas and to provide a platform to stage operations against terrorist organizations. Secondly, by military means, it seems strategic for them to contain the Houthi inclinations whose game of destabilization in this peninsular end is becoming disastrous in their view. This game raises regionally shared misgivings about the risk of consolidation of a Shiite pole of influence dominated by Iran.

On June 19, 2018, the battle of Hodeidah, also called Operation Golden Victory, resulted in the recapture of Hodeidah’s airport after a 7-day operation of combined Yemeni and Emirati land forces, supported by Saudi air raids. The strategists of the Emirati forces have undoubtedly succeeded in the initial phase of the offensive by reaching the southern and western suburbs of the city, via a rapid progression of combat units along the coast.

In the immediate future, one may wish that the battle of Hodeidah – which has killed approximately 350, mainly Houthi militiamen for the moment – will not change into a long and tedious urban battle, spread over several months, with disastrous human and material consequences. To this end, we could mention the Iraq War’s battles of Fallujah (in 2004, 2013, and 2016), or the Syrian Civil War’s battle of Mosul from October 2016 to July 2017.

In conjunction with the operations, the UN envoy for Yemen, Martin Griffiths, continued his meetings with the various protagonists to try to find a salutary option to prevent any clashes’ further escalating. The UAE has officially supported this attempt through their Minister of State for Foreign Affairs, Anwar Gargash, who specified on June 23, 2018, that the UAE welcomes “continuing efforts by UN Special Envoy, Martin Griffiths, to achieve an unconditional Houthi withdrawal from Hodeidah city and port.”

Attempts to find a compromise and concerns for the health situation

Prior to the combat operations, the UAE authorities, in correlation with the representatives of the UN, had not given up conciliation solutions. In a goal of peacemaking, the UAE and the UN had begun discussions with the Houthis in order to convince them to leave the port of Hodeidah to free access. Faced with their refusal, the coercion operations then resumed. Since then, through their conquests of the urban area, the coalition troops managed to break the logistical links of the Houthi paramilitaries between Hodeidah and Sanaa, their nerve center.

No one has any interest in a brutal deterioration of the situation. This will put coalition units in the grip of mobile paramilitaries and will raise the risk of stagnation for a reconquest of the city that would become, therefore, tedious and more deadly. The inevitable management of the flood of civilians seeking to leave the premises would only aggravate the situation. Mass exoduses of populations in distress have already been observed in the area of Hodeidah in recent weeks.

The United Arab Emirates therefore wish that this victory, which would be an undoubted tactical success, be amplified thereby allowing a massive arrival of humanitarian aid that has become urgent. The accessibility of the port of Hodeidah is therefore crucial, as are the ports of Ras Isa and Salif, located further north. More than 22 million people are in a state of sanitary distress and rely on emergency external help. In a recent report, the UN, however, accused the Saudi-led coalition to have made collateral damages when intervening in Yemen. Indeed, they pointed at recent attacks made on residential areas as discrediting the coalition who is pretending to be working in an “open and transparent manner” with the UN.

The weight of jihadism and its sclerosing dogmas

On the sidelines of this main confrontation, other actors are complicating the deal: on the one hand, the secessionist tribes of the south of the country, and on the other hand, the Islamic organizations – AQAP (Al Qaeda in the Arabian Peninsula) and the Islamic State or ISIS. Since 2014, the Islamic State has taken the opportunity of the civil war to establish its own structure in Yemen, under the leadership of the Saudi Bilal al-Harbi, to extend its deadly policies. AQAP and ISIS, competing proto-states despite similar jihadist motivations, have been engaged in their own war with regional impacts, particularly in the province of Hadramaout, where they are both demonstrating real nuisance capabilities through targeted attacks, such as ISIS’s first attacks in Yemen which in March 2015 targeted two mosques in the capital Sanaa.

This recurrence of the Islamic threat is another reason to promote international synergy in order to eradicate it. The European Union could act in a more incisive manner in order to put an end to this war, while it is still struggling to forge a strong foreign policy line. For instance, Emmanuel Macron, the French president, played a decisive role during the Lebanon political crisis. Indeed, after the resignation of its prime minister in November 2017, the country encountered a critical political period. By playing a mediating role, Mr. Macron obtained a de-escalation of the conflict in Lebanon. A similar type of action could be an option to defuse tensions in Yemen.

Meanwhile, by constantly lashing out against the Iranian regime, their rivals, Tehran and Tel Aviv have all the capacities to overhaul a regional policy which remains today deadlocked. By fostering a new era of dialogue with Iran, the two countries could begin a de-escalation that could be useful even in the Yemeni crisis. Although of varying intensity, the links between Iran and Hamas (Gaza Strip), Hezbollah (Lebanon) and the Houthis, could come out transformed. The United Arab Emirates, therefore, could then focus on the struggle against jihadism that gangrenes a number of territories. In this respect, they have shown, on many occasions, a real and salutary effectiveness at intervention, as evidenced by their air strikes carried out from the Egyptian territory in August 2014 against positions of jihadist groups.

In the Yemeni case, the United Nations want, in any case, the resumption of peace negotiations and a significant step towards the end of a crisis that has already caused the death of more than 10,000 people, including nearly 6,000 civilians. The end of the conflict in Hodeidah could be a significant step forward on the path of peace in Yemen.