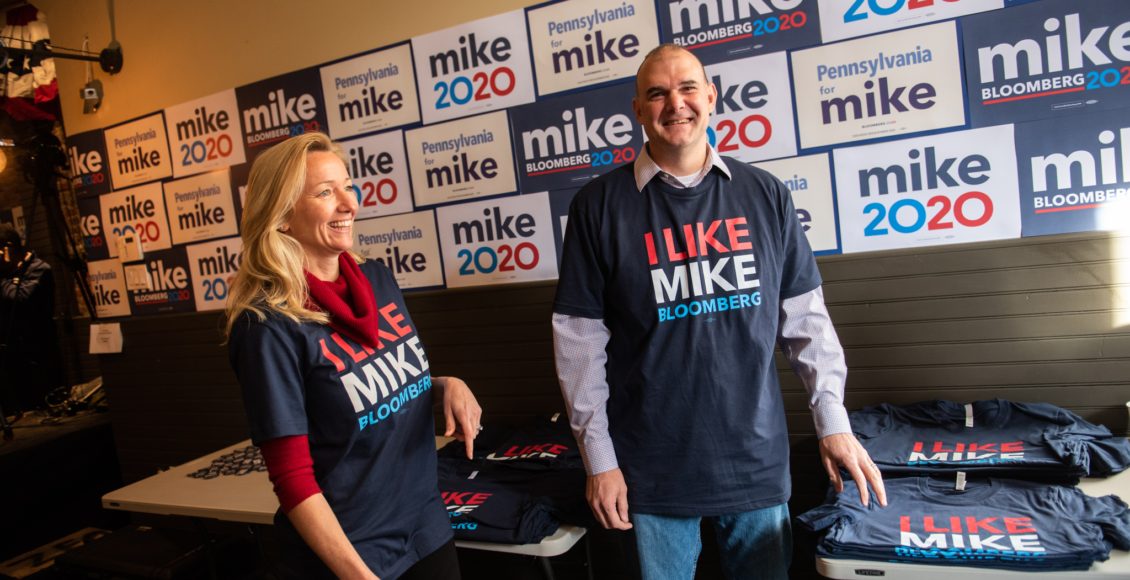 Among the host of politicians and businesspeople seeking the Democratic Party’s 2020 presidential nomination, an interesting trend has emerged. The candidacies of Michael Bloomberg and Tom Steyer—both billionaires—stand out in contrast to the candidacies of their less wealthy peers. While there is nothing novel about having affluent presidents or presidential candidates, Bloomberg and Steyer’s willingness to spend exorbitant amounts of personal money to fuel their campaigns sets them apart from their predecessors and fellow candidates.

By January 10th, Bloomberg had spent $200 million out of his own pocket, nearly equaling the combined total of $222 million spent by all other candidates. Steyer, for his part, has spent $106 million on advertising at the current point in the race. While Bloomberg has forsworn outside donations to his campaign, Steyer has accepted donations to fulfill the Democratic National Committee’s debate qualification requirements. In contrast to Steyer, Bloomberg’s reluctance to publicly fund his campaign and his resulting absence on the debate stage defy the conventional campaign process. Instead of debating, Bloomberg wants to “talk directly to the public, and explain [his policies].” Further, Bloomberg’s decision to forgo early primary states in hopes of winning big come Super Tuesday offers perhaps the best example of his unconventional campaign.

No matter their campaign strategies, as both candidates have increased their spending, both have begun to see their polling numbers rise. Bloomberg is currently sitting at 7 percent in multiple national polls, while Steyer has moved into double digits in the early voting states of Nevada and South Carolina. Though both men remain outside the top tier of candidates, they have become veritable threats to the heavyweights in the race.

The rise of Bloomberg and Steyer has prompted criticisms directed toward their candidacies. Bloomberg, specifically, has been criticized by Senator Bernie Sanders for attempting to “buy the election.” In comparison to Bloomberg’s self-funded campaign, Sanders topped fourth-quarter fundraising totals by raising $34.5 million from more than 5 million individual donors. Other candidates have seconded Sanders’ criticisms. Prior to Bloomberg’s announcement of his candidacy, Senator Amy Klobuchar asserted that “when people look at the White House and they see [Trump] … I don’t think they say, ‘Oh, we need someone richer.’” Andrew Yang gave his own take on Bloomberg’s candidacy, claiming “there are limits to what money can do.”

Sanders and others have raised important questions concerning campaign financing. Bloomberg’s candidacy, in particular, can be seen from multiple perspectives. As a former New York mayor with a controversial political track record, it is hard to imagine Bloomberg galvanizing the support of an increasingly left-leaning democratic electorate. Bloomberg’s “stop-and-frisk” policy as mayor of New York stands out as a potential turn-off for minority voters. Nevertheless, Bloomberg’s record-breaking campaign spending has enabled him to gather close to 10 percent of national support—a number that will likely continue to increase.

In considering Steyer, a businessman with no prior political experience, his polling numbers would be unlikely if not for his excessive levels of spending. Steyer’s progressive policies, however, should not be completely overlooked as reason for his support. Despite his wealth, Steyer has embraced the idea of a wealth tax on the superrich. Additionally, Steyer has cast himself as an advocate for climate justice and Supreme Court reform. Though a great deal of his support should be attributed to high levels of campaign spending, these policies have enabled Steyer to legitimize his campaign.

On the other end of the spending spectrum, Kamala Harris and Cory Booker, two candidates with arguably stronger political pedigrees than both Bloomberg and Steyer, were forced to drop out of the race due to a lack of funding. A shortage of cash, however, may not have been the cause, but an outcome of their failed candidacies. As the American electorate weighs its options, many voters fear that an African-American nominee may not be able to defeat President Trump. This could shore up the belief billionaires such as Bloomberg and Steyer have in themselves. Both candidates, as white males who have made vast fortunes, seem to think that only they can sway voters away from Trump.

In response to his critics, Bloomberg contends that he will avoid being influenced by outside sources if he draws only from his personal wealth for campaign financing. Because of their unique financial situations, both Bloomberg and Steyer can operate outside the traditional process into which more mainstream candidates are locked. Instead of vying for high polling numbers to qualify for debates, the two self-financed candidates can tailor their campaign strategies to their liking. Bloomberg, as previously mentioned, has decided to skip many of the early primary states in hopes of winning big on Super Tuesday. No candidate could undertake this strategy without the autonomy provided by Bloomberg’s finances.

The success of candidates like Bloomberg and Steyer should not come as a surprise. Similar candidates in previous years have mobilized their vast fortunes to run for President. By adopting the Washington “outsider” persona, these candidates have made use of their limited political experience to challenge the purported corruption and elitism of career politicians. The candidacies of Ross Perot and Herman Cain come to mind as examples of this trend. Both men came from successful business backgrounds to make their case for the presidency. Perot ran as an independent during the 1992 election, having never before served as a public official. Cain, for his part, ran for the Republican nomination in 2012 after his successful career as a business executive. Perhaps the best example of this “outsider” phenomenon can be seen in Donald Trump’s campaign promise to “drain the swamp” of the Washington “elites.” It is clear that the American electorate tires of the same people running government and becomes excited when a fresh face emerges. Proof of these sentiments can be seen when considering Congressional approval rates. The American Congress has not attained an approval rating above 40 percent since before 2005.  With some members of Congress occupying seats for multiple decades, it is no wonder why the political “outsider” garners immense interest.

No candidate can win the nomination without attracting a genuine base of support. Bloomberg’s history as Mayor of New York, despite his blemishes, will certainly attract voters. Steyer, as well, is gaining support thanks to his progressive platform. As primary season begins, the strength of both candidates will become clear. Wealth may be able to buy high polling numbers, but neither candidate will see true success without broad support from the electorate.