The Brain Behind the Deal: A Portrait of Chrystia Freeland 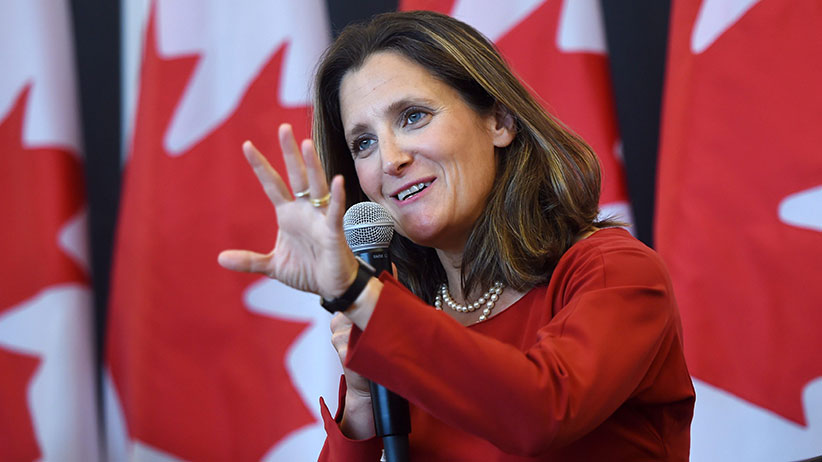 For the past year, Canada’s economic relationship with the United States has had an element of uncertainty thanks to US-prompted re-negotiations of the North American Free Trade Agreement (NAFTA). On September 30th, 2018, an eleventh-hour deal was finally reached, titled the United States-Mexico-Canada Agreement, or USMCA. According to former Canadian Prime Minister Brian Mulroney, maintaining Canada-US relations is one of the most important things for any prime minister to get right, second only to preserving national unity. Tasked with maintaining this crucial relationship throughout the NAFTA re-negotiations was Chrystia Freeland, Canada’s Minister of Foreign Affairs.

NAFTA re-negotiations were initiated in the summer of 2017 by US President Donald Trump, under pretext that the accord was highly disadvantageous to the American economy. Throughout the negotiations, media coverage tended to highlight statements made by President Trump or Prime Minister Trudeau, often overshadowing Freeland’s critical role. Despite being underrepresented by the media, Chrystia Freeland and her work have proven crucial for the future of Canada’s economy and for US-Canada relations. Freeland’s role is therefore worth highlighting.

Who is Chrystia Freeland?

Chrystia Freeland was born in 1968 in Canada to a mother of Ukrainian origin who fled a German refugee camp at a young age. Her parents described her as a very studious child – a description Freeland lived up to when she studied Russian literature and history at Harvard University. Freeland went on to become a Rhodes Scholar at Oxford University. Soon after, she began her career as a journalist with the Financial Times. By the age of 29, Freeland was the deputy director of the Globe and Mail and a managing editor at the Financial Times.

In 2013, Freeland entered politics as Member of Parliament (MP) for the Toronto-Centre riding. As MP, Freeland was outspoken about various international issues, including Canada’s need to support Ukrainian independence and encourage small Canadian companies to expand their work abroad. While stationed in Moscow as Eastern European correspondent with the Financial Times, Freeland was a vocal critic of Putin’s government. Her stance on Ukraine and open disapproval of Putin earned her a place as 1 of 13 Canadians banned from entering Russia. In 2015, she was selected by Trudeau as his Minister of International Trade. With this portfolio, Freeland concluded the Comprehensive and Economic Trade Agreement (CETA) between Canada and the European Union. Following the cabinet reshuffle in July 2018, Freeland became Minister of Foreign Affairs.

A background on NAFTA

Chrystia Freeland’s extremely successful academic and professional career led her to broker the NAFTA re-negotiations on Canada’s behalf. In the decades following its implementation in 1993, NAFTA stimulated economic growth for its three partners and tripled merchandise trade between them to a total of 1.0 trillion USD in 2016. NAFTA has also been credited with creating jobs, stimulating foreign direct investment (FDI), and lowering prices of goods and services. For the past 26 years, NAFTA enjoyed an overwhelmingly positive reputation from all three member countries. Then, in 2016, everything changed.

Throughout the 2016 American presidential elections, then-nominee Donald Trump described NAFTA as the “single worst deal ever approved” by the United States, promising to leave the Agreement if elected president. Re-negotiations officially commenced in August 2017. The subsequent year was dominated by Trump’s outlandish statements against Canada and Mexico, with the President qualifying the other member countries as “spoiled” and “very difficult to work with.”  Donald Trump repeatedly took aim at Canada, with misleading statements about Canadian industries and jabs at Trudeau. The Canadian Prime Minister responded publicly to several of Trump’s disses, resulting in a back-and-forth between the two leaders. This discourse has largely taken place between heads of government, sidelining Freeland’s involvement in the negotiations.

On September 26th, 2018, Trump expressed his dislike for the Canadian ‘representative,’ indirectly referencing Freeland. While this may reflect frustration with Canada’s tough negotiating position, Trump’s animosity could also reflect a (conscious or unconscious) bias towards Freeland as the only woman involved in the negotiations.

Eager to bring his bilateral deal with Mexico to Congress by October 1st, Trump began pressuring Freeland and Trudeau to make compromises on NAFTA. On the night of September 3oth, Trudeau announced that a tentative deal had been reached, bringing the 13-month saga to an end and transforming NAFTA into USMCA, the US-Mexico-Canada Trade Deal.

NAFTA and the American and Canadian electoral bases

Trade between Canada, the US, and Mexico represents 28% of global Gross Domestic Product (GDP) and was valued at 21.1 trillion USD in 2016. Despite the clear importance of international trade deals like NAFTA and the new USMCA, Canadian voters tend to be more focused on domestic issues than their American counterparts, who tend to concern themselves rather heavily with international affairs.

In the US, issues of international focus have historically dominated the conversation during federal elections. Presidential campaigns have often revolved around major international issues such as the Vietnam War or fighting the Soviet Union, and voters have had strong opinions on topics like overseas intervention and American diplomacy. Thanks to the internationally-minded American electorate, Trump’s relationships with other countries attract attention from voters. Publicly critiquing Canada thus plays an important role in boosting Trump’s popularity amongst his base.

In contrast to the American electorate, Canadians are starkly focused on domestic issues. In 2015, an Ipsos poll found that the main concerns for voters heading into the 2015 election were domestic questions, such as cost of living, food prices, pensions, and the economy. A second study in 2016 found that for supporters of all three major federal parties, the top concern was the economy in general. Other important topics for voters include health care, poverty, and unemployment. A possible reason for Freeland being sidelined might thus have to do with the domestically-minded Canadian electorate, which struggles to focus on international negotiations and the politicians involved. Beyond being minimized in the media, Freeland’s role is also not likely to play a large part in Trudeau’s 2019 re-election campaign, as domestic issues prove more successful campaign topics for Canadian parties.

Although Freeland was under-reported in Canadian media, her popularity among Canadian voters has increased somewhat since the negotiations began. An Angus Reid survey concluded that Freeland was “receiving the most praise from the Canadian public on the whole” by November 2017, after the beginning of the negotiations. She also received vastly positive reviews after her Diplomat of the Year Award speech in June 2018. Considering how domestically-minded Canadians tend to be, the fact that Freeland is now receiving this attention and praise is proof of her impressive tact in handling these negotiations. While it may reflect Canadians picking up on the domestic implications of the NAFTA re-negotiations, it could also indicate a unique capacity on the part of Freeland to capture the electorate’s attention on international issues.

Regardless of the attention received by the media or the electorate, Freeland’s role in the NAFTA re-negotiations has been crucial. Thanks to this brain behind the deal, Canadians can rest assured that the Canada-U.S. relationship is on the mend with the new USMCA accord.