The Burning North: A Warning for Humanity 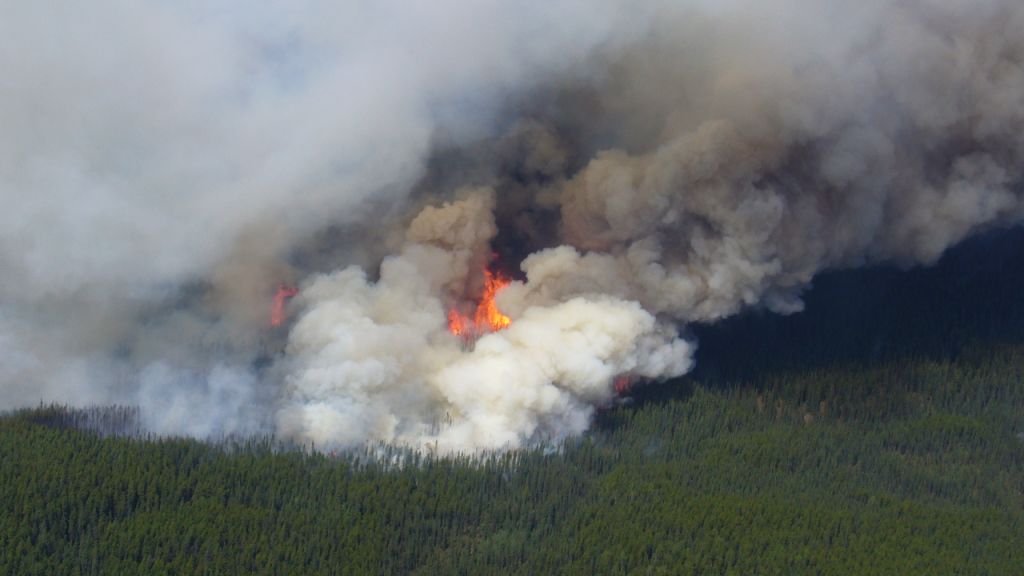 At the end of July, people in my hometown of Whitehorse, Yukon, woke up to a mysterious haze hanging in the air. The otherwise clear summer sky took on a dull hue, and the usually-jagged mountains on the horizon appeared blurry. Though not especially pleasant, this sort of phenomenon is not unheard of in the region. Forest fires are a common summer occurrence in Western North America, with their frequency increasing in recent years — just last summer, quick-moving burns came close to threatening properties in communities near mine.

This year’s smoke was different. While there are near-constant fires burning which pose no threat to humans, a rainy spring and early summer prefaced what has been a relatively fire-free July and August (at the time of writing). So what was the source of the smoky haze that enveloped the Canadian North? After some investigation, it was announced that the smoke present in Alaska, Yukon, and the Northwest Territories originated in Siberia, where nearly 3 million hectares of Russian forest continue to burn.

The intrusion of wood smoke from thousands of kilometres away is relatively harmless and benign in the grand scheme of things. Still, it illustrates an important point: the effects of climate change on human life know no boundaries, transcending artificial borders and natural divides. Therefore, international cooperation is imperative in ensuring peoples’ capacity for survival and comfort despite climate change.

Climate change is directly responsible for the Siberian wildfires of 2020. While global warming exacerbated by the depleted ozone layer has generally been experienced as a gradual shift on the global scale, the Arctic is affected to a much more extreme degree. Between January and June, average temperatures in Siberia were five degrees (Celsius) warmer than usual, and the town of Verkhoyansk witnessed the highest ever temperature recorded above the Arctic Circle on June 20, topping out at 38°C. These high temperatures lead to drier plant life and ground, facilitating the rapid spread of wildfires started by natural sources such as lightning strikes. Scientists widely agree that such high temperatures in the region would be impossible without climate change.

The delicate ecosystems of the far north are heavily affected by global warming and the resultant rise of average temperatures worldwide. The northern ground is largely composed of layers of permafrost which remain perpetually frozen. The impacts of melting permafrost on human life are twofold. Firstly, all infrastructure in the far north is built upon this frozen ground. When the permafrost melts, the structural integrity of buildings and roads can often be severely compromised. As such, the melting permafrost will likely cause billions of dollars in damage every year. Secondly, permafrost holds massive amounts of carbon and methane, and as melting continues, these greenhouse gases will be released into the atmosphere. In the long term, Scientists predict that these sudden emissions alone could raise temperatures by more than an entire degree Celsius. Combined with other forms of anthropogenic climate change, the melting of Arctic permafrost could prove catastrophic.

International cooperation must be prioritized in the fight against climate change. The 2015 Paris Agreement was a step in the right direction, hailed as “the world’s greatest diplomatic success,” but most of its signatories are falling short of the emission reduction goals outlined in 2015. Additionally, the 2019 announcement of the United States’ upcoming withdrawal from the Agreement severely undermines any hope of other high-emission countries improving their adherence to the Paris targets.

A great injustice of the climate crisis is that a country’s level of environmental damage usually does not reflect its own emissions. Countries like Nepal or Kyrgyzstan — which neighbour major emitters but are responsible for comparably minuscule levels of emissions per capita or otherwise — can bear a significant amount of damage for which they hold no responsibility. Even remote island nations like Fiji are hugely at risk from rising sea levels, despite their negligible contributions to climate change. China, Russia, India, and the United States combined are responsible for over 50 per cent of global CO2 emissions, due to their huge populations and/or industrialized economies. Likewise, Global North countries like Canada and Estonia emit a significant amount of CO2 per capita. Still, the case of the Siberian smoke in Yukon is a bit of an outlier; more often, the Global South is punished for the Global North’s relentless release of emissions.

In a year full of headline-making disasters, the Siberian wildfires have flown relatively under-the-radar. Regardless, these blazes offer an ominous glimpse into future summers in the far north, which will only become hotter and drier in the coming years. Not only are the wildfires extremely damaging for nearby regions, they also affect far-flung communities and ecosystems. Discrepancies between different countries’ emissions levels do not always translate to corresponding levels of damage from climate change. Instead, the entire world bears the consequences of the largest emitters’ actions. Compared to the future effects of climate change on our lives, a bit of transcontinental smoke is not particularly worrisome. However, where there is smoke, there is fire. The international community must heed this warning as a sign of much worse things to come should it fail to enact serious change on a global scale.

Featured image: A wildfire tears through the forest along the British Columbia/Yukon border in 2011. Global warming has increased the frequency of blazes like this, thus increasing the threat posed to humans. Photo by the B.C. Ministry of Transportation and Infrastructure. Licensed under CC BY-NC-ND 2.0.