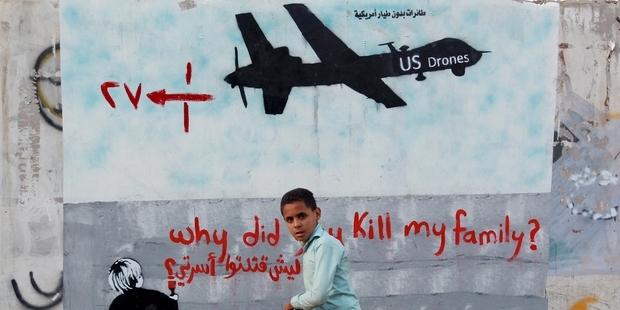 There’s the occasional headliner that promises the game-changing targeted killing of important figures in leading terrorist organizations, but is the use of drone strikes in Middle Eastern regions really an effective technique in dismantling and destroying terrorist groups? Although it may appear initially within media exposure that these attempts to weaken groups like Al Qaeda and the Islamic State through the drone program are beneficial, the few successes largely overshadow the many unintended deaths and consequences of targeted drone strikes. With particular consideration to one of the most widely known drone programs conducted by the United States, it has been found through research by the Bureau of Investigative Journalism that of the deaths produced by the program, only 3.5% of them were terrorists, with thousands of unintended civilian casualties, hundreds even including children.

According to top aides of U.S. President Barack Obama, the American drone program has grown to its wide-scale use today under Obama due to its convenience as a technologically advanced technique that allows a country to avoid conventional warfare and the use of ground troops while still attacking an enemy overseas. When Obama first assumed the presidency in 2009, the drone program was only actively operating in Pakistan, where there had been only 44 strikes over five years causing the deaths of about 240 people.

Two years later, there had been 240 drone strikes with four times the amount of deaths, and the program had been expanded to include several more countries that contained targets. This growth of drone warfare can be attributed to its appeal to Obama in that it doesn’t directly put the lives of American soldiers at risk, while still fundamentally harming the structure and viability of international terrorist organizations. Despite some of the success that targeted drone strikes have had in eliminating high-ranking members of various terrorist regimes, from Al Qaeda to the Islamic State, the defense of American lives cannot be an acceptable reason to risk many more civilian ones in the targeted regions due to a volatile and ill-informed campaign. Barack Obama has admitted to the undeniable civilian deaths caused by the drone program, but in a manner that dutifully regretted lost lives in a tumultuous region abroad, while failing to fully understand the consequences of allowing such a high level of collateral damage of innocent people, in the aim to kill such few. It’s easy to write off unknown, foreign civilians as acceptable losses in the pursuit of a more free world, but this is a grave mistake when the proportion of deaths is so skewed towards those who have done no wrong, and without considering the perspective that everyone has a right to life, especially those who have not willingly chosen to sacrifice it.

Furthermore, transparency is also a considerable issue, with Obama claiming that drone strikes are more accurate and safer for civilians than other techniques, while an investigation of classified documents revealed the unmanned drone program is 10 times more likely to kill civilians than bombs or missiles from U.S. jets that are manned. There has also been no concrete release of information regarding training techniques and policies in place in order to streamline the reduction of civilian casualties, or other attempts to limit the collateral damage that drone strikes cause. The issue regarding government transparency is perhaps one of the most significant ones related to the drone striking program, as the true extent of the damage caused over the years to innocent people and civilian populations has been undermined by the effort to present a military program as more effective and invoking less collateral damage than the reality in this case.

Besides the problems surrounding the gross understatement of unintended deaths in the regions affected by drone strikes, there is also an issue with the transparency of how foreign drone strikes affect the relations of the targeting country with the county that the targets inhabit. An example of this can be seen in Pakistan, which has been the subject of about 400 drone strikes as of 2014, during a turbulent time in American-Pakistani relations that has left an impact on the foreign interactions of the two countries. Many of those within Pakistan view the American imposition of drone strikes within their country as showcasing the arrogance of the United States, while American officials viewed the Pakistani government as uncooperative in their attempts to fight Al Qaeda and the Taliban, resulting in their view of the necessity of drone strikes in the region. The tensions between countries targeting individuals for death and the countries that harbor the targets is clear to see, and ultimately puts a strain on the relations of the participating countries, furthering the costs of the drone program in many situations. In addition, many see the use of the American drone program as an overt display of the military power of the United States and its intervening global reach, which some believe increases radicalization in affected areas and contributes to anti-American sentiments in regions that can constantly point to the United States as the reason behind the fear and hardship that people are experiencing in their lives.

Additionally, many people question the reliability and accuracy of the information and intelligence used to carry out the drone strikes properly, as drone strikes are often pre-emptively used before there is the proper amount of proof that the targets are combatants and the rightful subjects of a strike. This can be seen through the comments of Rachel Stohl of the Stimson Center, who has said, “These are precise weapons. The failure is in the intelligence about who it is that we are killing”. Beyond the initial information regarding those targeted in drone striking, there are also problems with the release of information classifying the individuals that were targeted. People that have been killed are classified using simple statuses like “enemy combatant”, when these labels often aren’t verified or expanded upon. Civilians who are inactively protecting themselves with weapons, or men that fit a certain description have all been wrongfully targeted and killed by the drone program, which is something that must be distinguished and properly researched beforehand, and also accounted for in the aftermath.

There are many evident and intolerable costs associated with the program of unmanned aerial drones that result in a level of collateral damage and disregard for human life that is much too high. It should never be acceptable to sacrifice as many civilians as the drone program has with only a few intangible advantages and a still uncertain view on the effectiveness of this strategy, as made clear by its many drawbacks. The practice of drone-striking, with all of its obvious flaws, can no longer in good conscience continue.