The Culpability of Hjalmar Schacht: Part 1

How Hjalmar Schacht Seized the German Economy to Prepare for War 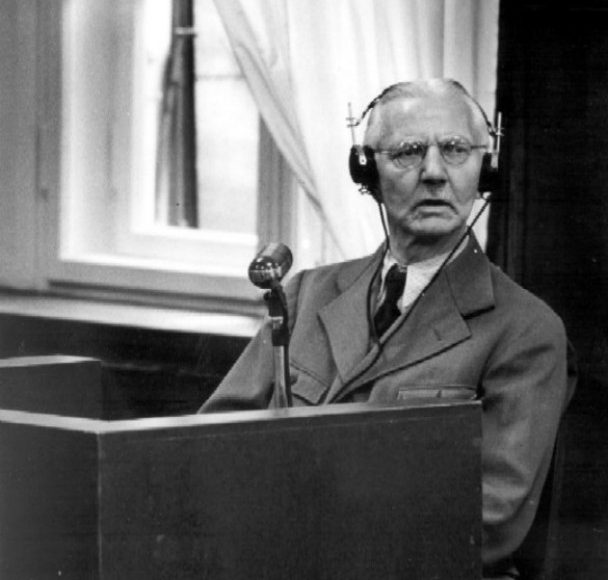 “But Schacht, don’t you realise how fond I am of you?”

This affectionate statement came from the most unlikely source: Adolf Hitler, the chancellor of Germany, in 1937. Who could have made one of the most brutal dictators ever express so much admiration? The man was Hjalmar Schacht. As Hitler’s banker, Schacht implemented some of the most original economic programs in Germany from 1933 to 1937. Concerning Schacht’s significance in the Nazi Party’s success, there are two dominant schools of thought. One, which hails Hitler as the “Great Man,” would argue that the supremacy and endurance of the Nazis were the direct result of the dictator alone. But that view has mostly given way to another school, which believes that Hitler alone could not have accomplished everything, at least without the help of people like Schacht. His role, then, was to reinforce through his economic policies, Hitler’s totalitarian rule financially and morally.

To understand Schacht’s role in upholding Nazi Germany, one must first analyse his economic policies. In March 1933, Schacht was hired by Hitler, then the new chancellor, as President of the  Reichsbank; seventeen months later, Schacht acceded to the position of the German Minister of Economics. At that time, the country had been “bled white of all capital” (Tolischus 1969, p. 205) and lacked the crucial “effectiveness of the army and the morale of the nation.” As the head of the two largest financial institutions in the country, Schacht was responsible for the complicated duties of any economic minister, such as the allocation of the government’s expenditure, tax regulation, and the production rate of businesses. Moreover, he attempted, with success, many unique policies, including those of the public works projects, Mefo bonds, and the New Plan. In the scheme of the regime’s major goals, the policies he enacted complemented the overarching ideals of Nazism, strengthening them like pillars of a Greek temple.

Having barely warmed his seat at the Reichsbank, Schacht, endorsed the government’s Operation Reinhardt. Agreeing to invest a billion marks, the bank hoped to stimulate the housing industry through factories and an urban renewal plan. Along with Schacht’s own autobahn project (Schacht pledged 600 million marks for loans) – building a network of modern highways and freeways across Germany – the public works provided millions of workers with desperately needed jobs. If not already enrolled in the armed forces, all young able Germans had to serve six months in the newly established “ditch digging” Labour Corps or the flourishing armaments industry (Weitz 1997).

When Hitler recruited Schacht, Hitler’s foremost concern, unemployment, became Schacht’s first challenge. These projects were definitely not entrepreneurial ventures; Schacht invested for Hitler. As soon as the Reichsbank’s loans had been repaid, Schacht pulled his institution out of the projects. His purpose was to help Herr Chancellor (the name by which Schacht preferred when addressing Hitler, instead of Mein Führer (Weitz 1997)) gain popularity with the German population by providing millions of people with work. Favourable public opinion, of course, is the hope of any leader, let alone one who was preparing to take his nation into battle less than a decade later. When Schacht took his position at the Reichsbank in 1933, six and a half million Germans, out of a total population of 65 million, were without jobs. By the end of his first year, Schacht had reduced unemployment by two million; by 1936, this number was further reduced to 1.6 million unemployed. By 1937, there were only 912,300 left unemployed. There were rises, though, in a person’s working hours per week — from 41.46 to 47.04 hours (Deuel 1942; Goldston 1967). At the same time, Germans neither minded the decreased pay of 25 shillings a week nor the taxes that took as much as a quarter of their income, that went the same for higher taxes and “contributions” to the Nazi party. The power now rested in the dictator’s hands; through Schacht’s employment schemes, it was evident that that security meant more than liberty to the people (although public polls and surveys about the leader are lacking in a dictatorship, this level of support is implied by the Germans’ willingness to, without provocation, invade and annex Austria in February 1938). Eventually, it would be proven that Hitler’s success indeed found its basis in the mitigation of  poverty and unemployment, as historian John Weitz (1997) concluded.

Meanwhile, projects such as the autobahn strengthened the German military – an aspect of the totalitarian state that its citizens were once truly proud of. Before construction began, the country already possessed one of the best railway systems in Europe; the autobahn was icing on the cake. By laying the modern superhighways, the military could maneuver with greater efficiency, thus having the potential of reaching  battle zones and rebellion sites faster than ever. Schacht would continue to show that his plans complemented Hitler’s goal of waging war.

In terms of economic theory, not only did Schacht control the market demand through job creation, by virtue of the Minister of Economics position, he commanded the supply as well. Even saying that Schacht controlled the production of goods was an understatement; his power stretched from the extraction of raw materials to the amount and type of goods to be produced. Even at the marketplace, the Ministry determined where the products should be sold and for how much money. Guidelines were prescribed that stated the types of raw material that could or could not be used in making a commodity, eradicating the red tapes of bureaucracy that prevailed in this economy before. Scarce materials were ordered to be mixed with a set amount of abundant ones, while synthetic materials were produced to substitute those which must otherwise be imported. As Kenneth McVay (1999), Canadian Holocaust activist and creator of the online Nizkor Project, described, the approach formulated “exact instructions for every individual commercial undertaking…laid down by a central authority.”

The centrally planned method of production that Schacht led was no doubt beneficial to the stability of Hitler’s totalitarian rule. All aspects of the market supply were pre-determined and planned by Schacht and the Ministry of Economics, which had generally the same interests and values. Moreover, the new implemented government plans would very unlikely result in a negative feedback from the market. If it were a free economy and the government chose to raise production costs, manufacturers might choose not to continue production due to conflict of interest This potential source of conflict was eliminated in 1930s Germany through Schacht’s initiatives. Compared to a capitalist society, Schacht’s command economy was much more stable.

[For instance], if [one] expand[s] credit on a large scale in…a free, capitalistic national economy,…the standardised kind of results [would be that] production increases; unemployment declines; prices, wages, dividends, and interest rates go up; the national income rises; imports tend to increase and exports to fall. [And] if one expands credit too far under these circumstances, [one] is liable to cause an uncontrollable inflation, with panic flights from the national currency into goods and other currencies, runs on banks, bank failures and soaring prices. Schacht’s economy would never succumb to the phenomenon of the free market under the same conditions. “They [had] increased production, employment, and the national income. But they [had] kept prices, wages, dividends, and interest rates within limits which, considering the circumstances, [were] remarkably narrow (Deuel 1942).

The beauty of the centrally planned economy was that the results were within Hitler’s control. Stability equals power, especially in a WWI-ravaged Germany.

Victims of this controlled, guns-before-butter program included the giant Ruhr region and industries such as Krupps and I.G. Garben (Goldston 1967). The larger corporations, nevertheless, were supportive of the system due to the much increased profits; from 1933 to 1938, their profits, on average, jumped 146 percent.

What must be stressed about Schacht’s controlled production technique was that it was relatively efficient. With a structured organization, there was minimal resistance to even revolutionary changes; if Hitler, or any high official, wanted to change the economic strategy, for example, to prepare for war, the transition would be smooth and quick. When Germany began experiments on autarchy – economic self-sufficiency, factories quickly output synthetic material. This saved the government unnecessary import capital and resources (e.g., transportation). In 1934, the investigations initiated by the Raw Materials Commission and the measures introduced for enlarging Germany’s raw materials basis through home production as well as for the furthering the production of substitute materials directly benefited war economy preparations, as described by McVay. Only through this type of economy could a strong, economically independent totalitarian state exist.

Based on this line of thought, Schacht developed the New Plan and proposed it in September 1934 (Weitz 1997). Taking control of the monetary current, Schacht and his ministry aimed to reduce the citizens’ demand for foreign currencies in purchasing consumption goods from other countries and then to use these currencies for the sole purpose of purchasing essential imports, which could not be acquired within Germany. Now, the exchange of international currencies was not available, and the government decreased the demand for foreign monies, in McVay’s words, “by various measures suspending the service on Germany’s foreign indebtedness, by freezing other claims of foreigners on Germany, by a stringent system of export controls and by eliminating foreign travel and other unessential foreign expenditures.” By reacquiring all foreign currencies, Schacht sought to drastically increase the size of the Reichsbank’s foreign reserve. In this simple way, the German government could purchase the material it needed using only the foreign currencies it already had, and the country did not need to bring in unnecessary capital — those not in German marks.

Eventually, through a new clearing system, Schacht made it possible for German businesses to accomplish international trades without using foreign currencies. A variation of the system was the introduction of aski accounts (or Auslander Sonderkonten fuer Inlandszahlungen ; foreigners’ special accounts for inland payments) (Goldston 1967). Instead of paying foreigners with their currency or the German mark, they were given “special” aski marks. This currency could only be used to purchase German exports to the country of the aski marks’ holder, and they could not be converted into a major international currency.

As Germany edged closer to war, it was apparent Hitler, far from being the lone mastermind, delegated his work to very capable agents (and big personalities) like Schacht. His introducing public works projects gave unemployed Germans jobs and Hitler tremendous popularity. With it Schacht further placed constraints on domestic industries under a command economy. It would complement his New Plan, among other policies to come, in ushering Germany into greater economic self-reliance that positioned the country for war.