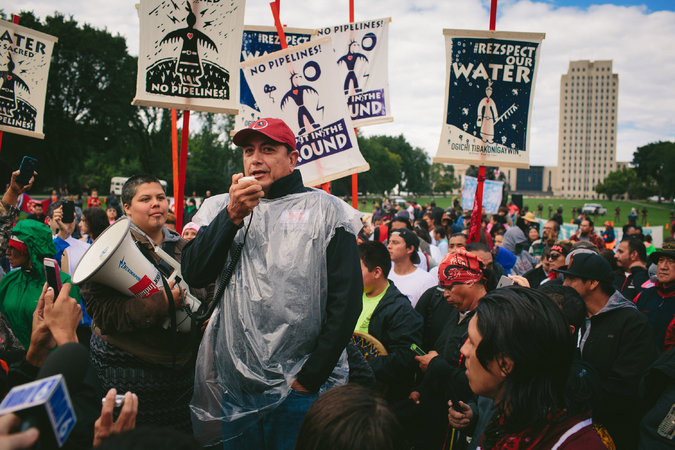 "The Standing Rock Sioux chairman, David Archambault II, spoke to supporters at a rally after learning that the United States government had ordered a pause in construction on part of the pipeline." Credit: Credit Alyssa Schukar for The New York Times
Share

Construction of Energy Transfer Partners’ oil pipeline has been halted by the efforts of over a thousand American Indian protesters including a lawsuit brought by Earthjustice on behalf of the Standing Rock Sioux tribe.

President Obama suspended the Dakota Access Pipeline (DAPL) along a 40-mile stretch of land on September 9th, in a joint statement with the Justice Department, the Interior Department, and the U.S. Army. The Administration made the move despite a federal judge ruling against the Sioux tribe’s lawsuit, which challenged the U.S. Army Corps of Engineers (ACE)’s grant of permits for the pipeline to be built across ancestral burial grounds and near an important river outlet leading into the Missouri River, upstream from the reservation.

David Archambault II, chairman of the Sioux tribe, primarily organized an encampment that is recorded as the largest gathering of American Indians in the last 130 years. Environmental groups have joined dozens of representatives from various Indian nations, bringing the total number of protestors to above 2,000. The encampment is reaching its third month, with smaller groups of protesters having settled in as far back as April. However, local residents wary of the massive influx of outsiders have pointed out that, while a camping permit has been submitted, the protestors are living on ACE land without a legal permission. It would seem that the ACE is ameliorating the protesters and treating the situation with delicacy, considering their poor evaluation of the cultural and environmental circumstances led to the current situation.

The 1,170-mile oil pipeline is nearly half complete, crosses four states and ends in Illinois, which is home to a greater number of pipelines and refineries. Prior to the $3.7 billion dollar project, oil was transported south by train and truck, in an arguably less cost-effective and environmentally responsible process. On the other hand, major pipeline ruptures have occurred in recent years that seeped millions gallons of oil into the ground, devastated the environment, contaminated rivers and lakes, and cost decades and billions of dollars in cleanups. Many pipelines lack the necessary federal oversight and environmental protection standards. It is not abnormal for oil companies to push their pipelines to the limit, despite being aware of damaged or at-risk sections. ProPublica reported that over 50 percent of pipelines in the United States are 50 years or older; presumably, chances of catastrophe will be only on the rise unless expensive maintenance projects are undertaken to combat corrosion and other issues.

In an open letter to the White House, over two dozen organizations including the Sierra Club, Greenpeace, and U.S. Climate Plan have asked the president to halt construction and repeal ACE permits for the DAPL. An important part of their argument is that the streamlined process through which oil and natural gas companies are approved to build pipelines  bypasses key environmental reviews and public debate. The Corps grant permits to most pipelines (including the DAPL) through the Nationwide Permit 12. This permit treats a massive pipeline disrupting the lives of private citizens as a multitude of small, individual projects, thus requiring fewer regulatory procedures and public consent. It has exempted the DAPL from needing an Environmental Impact Statement as is required under the National Environmental Policy Act. Moreover, these environmental organizations contextualize the Clean Water Act’s general permit program as a regulatory process for minor and harmless projects such as constructing “boat ramps, mooring buoys, and some recreational facilities.”

On these grounds it seems that the process in which large corporations access public and private land, and obtain permission for environmentally harmful projects is far too lax and under-regulated. A more appropriate system would take into account the views of the affected communities, rather than federal organizations that receive very little of the negative health and environmental impacts, or oil companies that profit tremendously despite their accidents and spills.

History of indigenous rights in the United States is one of betrayal, destruction, and silencing through assimilation and monetary compensation.

Atrocities have been committed against American Indians since the birth of the United States, without the least bit of remorse or reproach by the government. In fact, many of the deaths and displacements of Indians are directly attributed to federal policy, executed by federal officials and workers. A well-known example is the 1830s’ forced removal of five tribes from southern states to the current-day Oklahoma, aptly named the Trail of Tears. The multiple gold rushes of the mid-1800s forced more than 300,000 Indians to migrate south from California due to the hazardous disposal of toxic chemicals and the destruction of wildlife habitats that were relied on extensively for food. In 1851, Governor of California announced, “A war of extinction will continue to be waged between the two races until the Indian race becomes extinct,” following the passage of the Act for the Government and Protection of Indians. This Act legalized slavery of Indian peoples and was explicitly used to expedite the disintegration of Indian culture and land.

In the modern era, following the end of World War II, the abuses continued through forced assimilation by the Hoover Administration: “The basis for historic Indian culture has been swept away. Traditional tribal organization was smashed a generation ago…Assimilation must be the dominant goal of public policy.”

The Standing Rock Sioux Reservation has a history of explicating immoral and illegal government policies. Following the Fort Laramie Treaty of 1868, the Sioux and other tribes were guaranteed a large reservation spanning the current-day South Dakota, west of the Missouri River. Despite an article stipulating that changes to the reservation required an approval vote of three-fourths of adult males, the government removed the Sacred Black Hills region. This land removal came only nine years after the Treaty, upon discovery of valuable ore and timber. In 1980, following decades of legal struggles by the Sioux—dating back to the 1920s—the Supreme Court ruled that “a more ripe and rank case of dishonorable dealings will never, in all probability, be found in our history.” Rather than receiving their rightful land (as implored by the United Nations), the Sioux were monetarily compensated the real value of resources extracted from the Black Hills as well as a five percent annual interest. The fund is held by the Bureau of Indian Affairs and has compounded to an estimated one billion dollars. The Sioux refuses to accept or use the money, because doing such would legally terminate their claim to Black Hills.

A coalition of 1,200 historians, archeologists, and museum directors has formed to defend the Sioux tribe and prevent the completion of the pipeline. In a letter written to President Obama, the group resolutely concluded that they “stand with the Standing Rock Sioux Tribe and affirm their treaty rights, tribal sovereignty, and the protection of their lands, waters, cultural and sacred sites, and we stand with all those attempting to prevent further irreparable losses.” Moreover, Archambault II called on the United Nations to take action because the pipeline violates its Declaration of Rights of Indigenous Peoples. Despite his caution with the DAPL, Obama approved two more Energy Transfer pipelines for construction into Mexico, as part of his mission to help Mexico privatize its energy industries.

Defence and support for American Indians in the U.S. can be improved through an increased awareness about climate change and understanding of oil and natural gas industries’ contribution to the irreparable destruction of the environment and human lives. The history and narratives of indigenous peoples of the United States must pervade the popular culture to raise further awareness, in new and innovative ways. The silencing of fundamental processes, events, and people of the past essential to present-day Indian communities can only be reversed through the efforts of historians, activists, public figures, and surrounding communities.

Up to this point environmental activists and organizations have worked closely with American Indian communities, developing bonds over shared values. Having said that, defence of indigenous peoples on the grounds of environmental protection is still once removed. The greater population of Americans need to feel invested (whether they are or not in fact), in the defence and support of American Indian sovereignty as separate nations. A victory against this Energy Transfer pipeline does not imply a reevaluation of historical silences.