The Day to Day of the Globalist-Protectionist Dispute 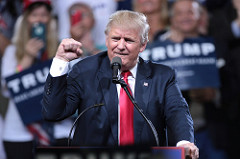 Democratic elections have a nasty way of portraying troubling divides between voters. Specifically, by the end of 2016, we will have seen the true colours of those in the UK and the US. The Brexit referendum in June saw Britain leave the EU, and the upcoming American presidential election in November further brings up the conflict between globalist and protectionist discourse. For centuries, opposing voter demographics have been an issue of contention within democracy. Greek philosopher Aristotle and former U.S. President Thomas Jefferson both acknowledged the shortcoming of pure democracy in their lifetimes: ignorance. Aristotle actually sought to avoid democracy, largely on the basis of popular ignorance. The idea that only the educated should vote, as they would be informed of their choices, whereas democracy only encourages free choice, was heavily discussed by Jefferson. He stated that “general education, to enable every man to judge for himself what will secure or endanger his freedom” (Thomas Jefferson to John Tyler, 1810, in (Jefferson 1903-04), v. 12, p. 393). The outcome of Brexit, which will take at least two more years to complete, has caused globalists to call out many Britons as ignorant and thus unfit to vote. These taunts were aimed at the largely uneducated demographic in Britain who voted to leave.

If Trump manages to ascend to the leadership of America come November, similar regrets are sure to ensue. However, is rejection of the uneducated a real frustration, or just an excuse for when democracy costs the ‘educated’ their vote?

Rising elitist sentiment begs the question; to what extent is democracy appropriate? The fact that Democrats judge certain Republican voters as uneducated is true, yet the world is more sympathetic to the Democrats than they were to the Remain party. The fact that Trump is more vocally ignorant and racist can attest to this comparison. For many, it was easy to call Remain party supporters snobbish for writing off the Leave party as dumb, but they aren’t as quick-lipped for the Democrats.

Looking closer at the “uninformed”, the majority of Trump’s support base does not hold any form of post-secondary education. However, the lack of a formal education does not necessarily silence an entire demographic, as it is possible to trust experience and informal teachings. Here lies the dilemma: are a person’s views questionable when they lack a formal education to back them up?

On the other side, governments and party leaders have been shirking accountability. It is easy for a Democrat to throw out an intolerant demographic or shut down a debate as purposefully ignorant, but it is neither realistic nor fair to discount an entire section of society.

Those in the UK who voted to leave, specifically Northern England, are poorer, live on council estates, and work less terrestrial jobs. Trump supporters share similar traits. Now, liberals are quick to devalue both groups as uneducated and ill-informed, ignoring the fact that they just can’t afford higher education. While they may be racist or intolerant, they also have not been informed on the issues of racism and immigration in their respective nations.

Post secondary educations, subscriptions to scholarly journals, and the general pursuit of knowledge are expensive. In the UK, one in five students cannot afford university, compared to a whopping 83% of Americans. Many underprivileged people see no reason for attending school or being interested in a country’s white-collar politics when they are surrounded by industrial workers in their day to day lives.

Further, political strongmen like Donald Trump or Nigel Farage of the UK Independence Party (UKIP) (or strongwomen, in the case of Hillary Clinton or Theresa May), rely largely on pathos in their rhetoric. What is a statistic on immigration to voters who simply want to make America great again? Who would be looking at the flow of goods when voters are desperately trying to make June 23rd Britain’s Independence Day? Lastly, why listen to the pleas of the ignorant when you label them as just that? Protectionism and avid nationalism has masked many racists, whereas formal education cloaks elitism, and both increase the divide between either side through passionate emotional appeals.

The subject walks a fine line with the applauded freedoms of democracy and state responsibility. Yes, voters are to have their own decisions and opinions, but it is the responsibility of the state to educate them on the subjects. When arrested, criminals are told their rights and asked if they understand them. Can we allow the same luxury to our free peoples in the western world? Or is a ballot where X marks the spot good enough?

Simply put, the state must be the one to educate it’s citizens on their own democracy. However, for the current situation of mass ignorance, a band aid solution needs to be implemented. Right now, that means not discounting an opinion simply because of the owner’s lack of formal education. In the future that could come down to a more bipartisan relationship between the right and left that encourages transparency and accountability, instead of alienation between both sides.