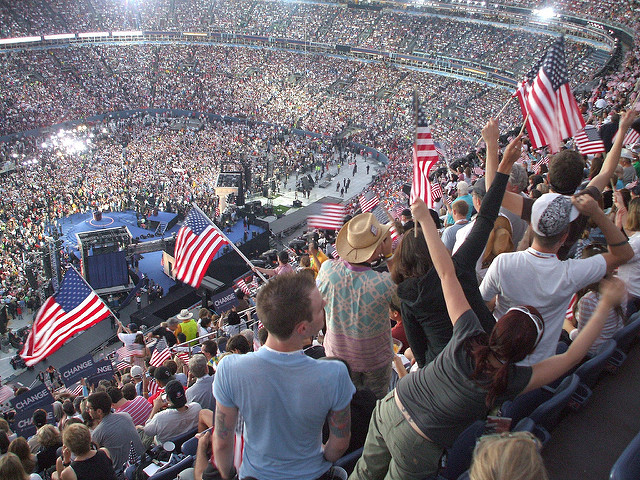 Front and center in American politics recently has been the rightward shift of the Republican Party and a subsequent combustion of party solidarity, as many rank and file conservatives line up behind Donald Trump, despite an effort by the establishment to dissuade them from his dangerous bigotry. As the media focuses on Trump’s rhetoric and his battle with Republicans such as House Speaker Paul Ryan and Senator Lindsey Graham, they have largely ignored the erosion of the Democratic Party brought on by its own rightward shift.

The growing anti-establishment movement on the left embodied by Bernie Sanders is a reaction to the center right, corporate influenced policies that have moved the Democratic Party’s historical place on the center-left to the center or even the center-right. While it would be inaccurate to portray the entire party as having shifted away from traditional liberal issues, there has been a definitive shift among Democratic Party leaders since the Reagan administration.

Since that time there has been a large rise in income inequality, increased incarceration, welfare cuts, and a loss of middle and working class jobs as factories have moved abroad under recent free trade agreements. Large corporations and companies in a variety of sectors including the airline industry, telecommunications, media and others have consolidated to such an extent that competition has been greatly reduced. As the influence of monopolies grow, consumer rights are increasingly infringed upon, and the influx of private funds into political races has created an environment in which it is difficult to challenge those business interests.

Consequently, the implementation of the Affordable Care Act (Obamacare) is largely viewed as a win for Democrats but only because today’s political climate is far more conservative than at any other time in the last 90 years. In fact, Republican President Richard Nixon, who was heralded as the first of a growing neoliberal wave at the time of his election in 1968, proposed a far more comprehensive and progressive health care platform than the ACA. Though his proposal would actually have covered more Americans than the plan heralded by President Obama and today’s Democrats, Senator Ted Kennedy rejected the plan as not going far enough in the early 1970s, instead seeking to implement a single-payer plan.

Democrats at the time were leading the charge for a realignment of the party to focus on progressive thinking and civil and labor rights. However, twenty years later, it was Bill Clinton himself who presided over NAFTA (1994), which was derided by labor unions who were forced to watch as companies outsourced to Mexico where they could pay workers cents on the dollar. After entering office as a Democratic hero who defeated Bush Sr. – the incumbent Republican in 1992 – the Clinton administration continued and escalated the war on drugs and turned its back on much of the progressive policy advocated by Democrats in favor of comparatively centrist and conservative solutions. The 1994 crime bill signed into law by Bill Clinton led to the era of mass incarceration, disproportionately affecting the Black and Latino working class. While Democrats largely deride the privatization of the current criminal justice system, they largely continue to accept donations from its lobbyists.

The big business lobby today is aided in large part by Bill Clinton’s deregulation of Wall Street, which repealed essential elements of the Glass-Steagall Act of 1933, one of celebrated Democratic President FDR’s signature achievements following the Great Depression. The deregulation allowed investment banks, insurers and retail banks to merge and meant that during the Great Recession of 2008, toxic assets were more spread-out and thus dangerous to ordinary citizens than they might otherwise have been. After benefiting from a 700 billion dollar bailout and a further consolidation of their assets with previous adversaries, the Citizens United (2010) and McCutcheon v. FEC (2014) Supreme Court decisions gave them unprecedented access to the political system. Wall Street and large corporations have since benefited by buying elections for politicians who will give them an ear at all times owing to their ability to practically fund their entire re-election campaigns. While many have derided Republicans for passing legislation in favor of their benefactors, Democrats are just as guilty of participating in the new process that does not seem to regulate so much as create an endless amount of donut-hole sized loopholes.

The equal participation of Democrats and Republicans in this kind of legalized corruption is emphasized by a 2013 bill sponsored by two Democrats and two Republicans to allow banks to use taxpayer backed funds to do high risk trading. In fact, more than 70 out of the 85 lines of the bill were written based on a draft composed entirely by Citigroup.

Therefore, it is not surprising that today, President Obama has largely extended Bill Clinton’s economic legacy of corporate liberalism. Obama’s overwhelming popularity in the Democratic Party largely stems from popular rhetoric challenging the moral compass of politicians who favor policies that disproportionately benefit the social and economic elite. However, he has based his economic policy on the quiet negotiation and implementation of the Trans Pacific Trade Agreement (TPP). It will encompass 40% of world trade and largely allow devastating challenges to regulations, rights and judicial sovereignty concerning workers, the environment, as well as general health and food policy in order to benefit the profits of large multinational corporations.

From 1996 to 2012 over 77 thousand factories moved abroad, costing middle class Americans jobs. In turn there has been an increased focus on immigrants, particularly Latinos, who migrate in search of employment. Democrats, including President Obama, have also moved inexplicably to the right on immigration. While even the 1976 Republican Party Platform called for a non-discriminatory immigration policy emphasizing the reunification of families, the current administration has deported more people than any other. Though it casts itself as the party in favor of immigrant and Latino rights, Fusion reports that President Obama is on track to deport more people than all the administrations throughout the twentieth century combined. Current presidential candidate Hillary Clinton has also been criticized for defending her comments calling for the deportation of Central American children fleeing violence which she labeled a, “responsible message” to those immigrants seeking asylum. For a party that largely castigates Republicans like Donald Trump and Ted Cruz for divisive and racist discourse towards immigrants, it appears that their actual policy and rhetoric have left immigrants without a party of the left to defend them.

Though there is no true party of the left, there remains a large and influential progressive base within the Democratic Party that has mostly cast its lot with Bernie Sanders. Sanders is running a counter establishment campaign emphasizing values consistent within the American mainstream left. Nonetheless, he has garnered minimal support from the Democratic establishment outside of a handful of sitting Congressmen and women. Instead the Party has mainly rallied around former Secretary of State and First Lady Hillary Clinton whose historical political affiliations are rooted in centrist doctrine, with some discrepancies such as her progressive attitude towards gun control or neoconservative leanings on defense and interventionist policy. While the popularity of Sanders has shifted Hillary to the left on a variety of issues, in a likely scenario when she and Trump capture their respective nominations, Democrats should expect a policy makeover and a shift back to the center in order to capture moderate republicans and independents who are uncomfortable and fearful of a Trump presidency.

Public perceptions of corruption among elected officials has given rise to an election where candidates on both sides are challenging the political status quo. The Democratic National Committee (DNC) has thrown its support behind Hillary Clinton as both the Committee and Clinton benefit overwhelmingly from large donations: according to opensecrets.org 3 of Clinton’s top 5 donors are Wall Street firms. In order to match Republicans in terms of large donations which help contribute to state, local and national campaigns the DNC prefers a candidate who will boost fundraising, instead of scaring Wall Street and Corporate donors with the threat of higher taxes, increased prosecution, and tightening of legal loopholes. In order to facilitate this process, the DNC recently rolled back popular restrictions put in place by Obama in 2008 on donations from federal lobbyists and political action committees.

Furthermore, DNC Chair Debbie Wasserman Schultz recently came out supporting legislation that would eliminate new laws protecting Americans from predatory payday lending. Her support for a Republican effort attempting to undermine Elizabeth Warren’s new Consumer Financial Protection Bureau has not been received well by many Democrats. It is yet another instance where the DNC and the Democratic establishment has shown itself to be out of touch with the base of its party as well as certain progressive Democratic politicians.

In the shift to the right over the past thirty-odd years, there has been an emphasis on cooperation and compromise with an increasingly conservative Republican Party. However, it has been particularly during the last decade that strong Democratic issues such as a progressive income tax, environmental regulation, universal healthcare and smaller defense budgets have been soundly defeated. While Republicans have moved to the right, Democrats have chased them in search of compromise, all the while compromising their own values in order to see deals done. As this election season is emphasizing, there is a growing resurgence on the left, and it is possible that by the time it is done we will be looking at a vastly different political landscape from the one that has existed for the better part of fifty years.