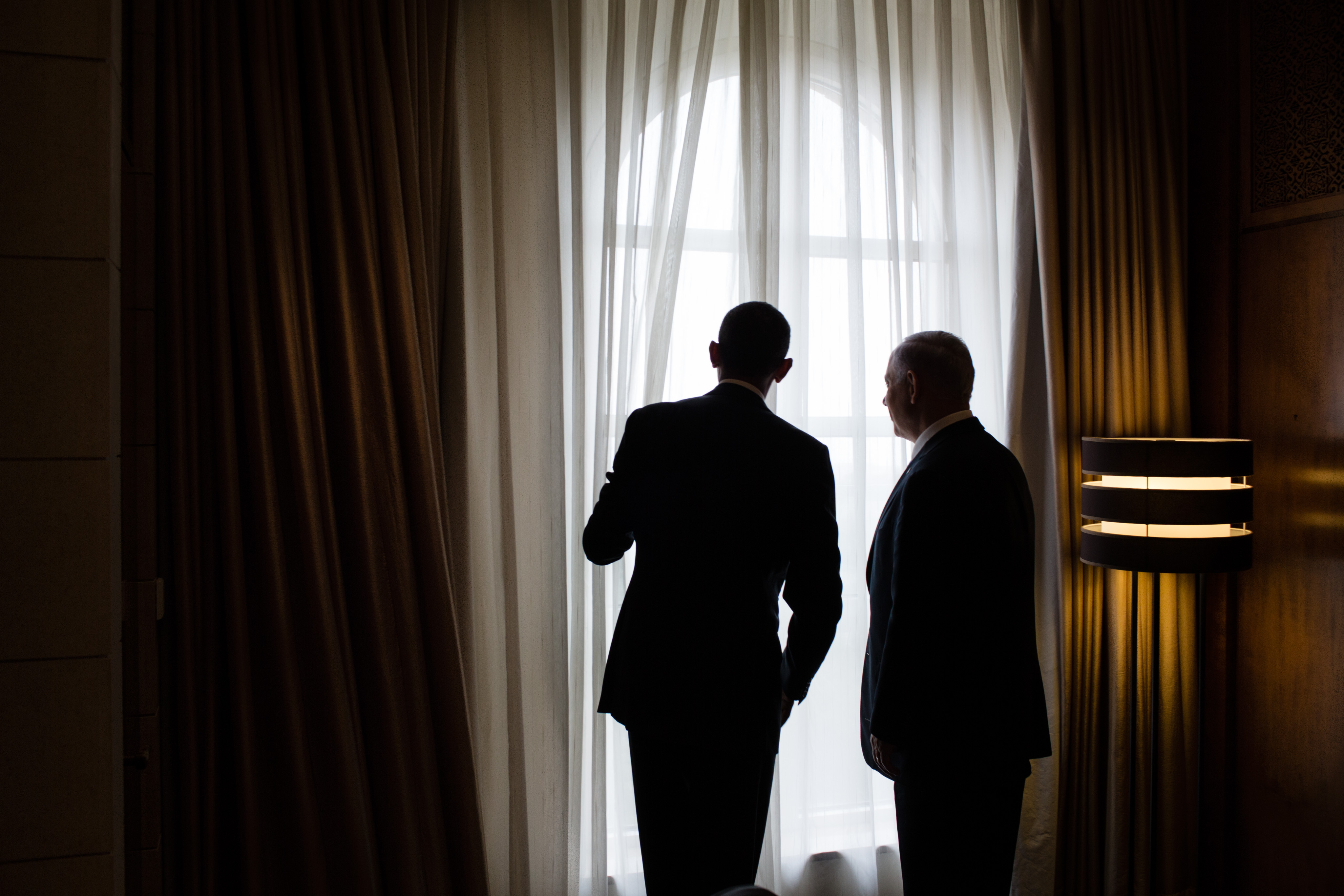 President Barack Obama and Israeli Prime Minister Benjamin Netanyahu look out a window before their lunch at the King David Hotel in Jerusalem, March 22, 2013. (Official White House Photo by Pete Souza) This official White House photograph is being made available only for publication by news organizations and/or for personal use printing by the subject(s) of the photograph. The photograph may not be manipulated in any way and may not be used in commercial or political materials, advertisements, emails, products, promotions that in any way suggests approval or endorsement of the President, the First Family, or the White House.
Share

After decades of nearly unquestioning support for the Israeli state, a lethargic linchpin of U.S. foreign policy that effectively ceded debate to security hawks and neoconservatives, the Democratic Party is currently experiencing somewhat of a watershed moment on Israel-Palestine.

Relations between the two nations have deteriorated substantially during the Obama administration, much of which has to do with the Likud government’s increasing authoritarianism and repeated refusals to halt further occupation and settlement of Palestine. Israeli Prime Minister Benjamin Netanyahu has held to a hardline stance throughout his premiership, vowing to prevent the formation of an independent Palestinian state under his watch and bashing the Iran nuclear deal in front of Congressional Republicans last year. Obama, for his part, laments the outsized attention Israel—and the Middle East in general—commands in the American foreign policy sphere and has clearly outlined his aspiration to pivot towards East Asia and Africa. Now, with the 2016 election less than five months away, a sizeable bloc of Democrats as well as countless others on the Left with significant clout in the party have begun to reevaluate U.S. foreign policy towards Israel in far more comprehensive and critical ways than ever before.This shift in policy could transcend the exceptional hostility of the Likud Party and carry wide-reaching implications for the future of American-Israeli relations.

Talks of a seismic split in the party over Israel-Palestine may be overblown—most national Democrats still prefer to avoid the issue altogether or otherwise speak in platitudes about the need for peace and Israel’s importance to the U.S.—but those willing to openly criticize Israeli state policies, particularly its illegal settlements in the West Bank, Gaza and East Jerusalem, are no longer just a fringe faction. Indeed, staunchly pro-Israel Democrats now look increasingly disconnected from the political sensibilities of the greater American Left. On June 5, New York Governor Andrew Cuomo, in a move that the director of the New York Civil Liberties Union said “raises serious First Amendment concerns”, issued an executive order to “develop a list of institutions and companies” that “participate in boycott, divestment, or sanctions activity targeting Israel, either directly or through a parent or subsidiary.” This list shall then be used to terminate all New York state business with such companies unless they can provide evidence, through a McCarthyesque public proceeding, that they do not in fact participate in such activity. Almost immediately following the executive order, Senator Chuck Schumer expressed his desire to implement a similar initiative at the national level.

Presumptive Democratic presidential nominee Hilary Clinton also counts herself among the party’s fervently pro-Israel wing, using her AIPAC speech this past March to rail against BDS motions on American college campuses and throw President Obama under the bus for his uneasy relationship with Nethanyahu. She did not mention the occupation once. Now, whether or not this speech was merely an example of pandering to the most powerful pro-Israel lobby in the U.S., the prospect of a Clinton presidency certainly seems ominous for those hoping to build upon Obama’s scepticism and adopt a more evenhanded approach towards Israel-Palestine. However, Clinton will be forced to reckon with the increasingly-influential forces of change within and beyond her party, and unlike another presidential choice available to American voters this year, she does not isolate herself from dissenting opinions and substantive policy debates.

This debate is relevant not only to Israel-Palestine but to the broader Bernie Sanders moment in American politics. In many ways, Sanders’ denunciation of Israel’s “disproportionate” counterattack on Hamas-controlled areas of Gaza in 2014—an uncontroversial, perhaps even obvious statement in much of the world but a revelation nonetheless in the heat of a U.S. presidential election—is representative of his entire campaign’s significance: mainstreaming ideas and policy proposals (i.e. single-payer healthcare, free public college education, comprehensive campaign finance reform, breaking up “too-big-to-fail” financial institutions, ending mass incarceration, etc.) once considered impossible. Political theorist and journalist Corey Robin summed it up best when he said, after Sanders’ stunning upset in the Michigan primary,

“The Left loves social movements. I do, too. But social movements don’t happen in a political vacuum; they’re not immune to the mood and medium of electoral politics. There’s nothing quite like a presidential campaign for taking pots and kettles long simmering on the Left’s back burner and bringing them to a furious boil.”

One needs only to look to the composition of this year’s Democratic Party platform committee for evidence of that impact. Much controversy surrounds Sanders’ addition of prominent social activist Cornel West to the committee. Despite years of valuable contributions to political philosophy, liberation theology, and black existentialism, among other fields, Dr. West has adopted a combative approach towards liberals and leftists who even slightly depart from his worldview (including Ta-Nehisi Coates, Toni Morrison, Melissa Harris-Perry and his former protégé Michael Eric Dyson). In one prominent example from a 2012 interview, he referred to President Obama as a “Rockefeller Republican in blackface”, exemplifying a disturbing tendency of the radical left to reserve its most vitriolic vilification for people of colour considered too accommodationist.

Yet, it is precisely the Democratic Party platform committee where West’s contributions may prove most valuable. Forced to grapple with the nuances of policymaking as part of a diverse 15-member team, he will have to devise constructive proposals for translating his ideals into plausible courses of action. More importantly, Sanders’ other four committee picks include James Zogby, president of the Arab American Institute and longtime Palestinian rights activist; Representative Keith Ellison (MN-5), the first Muslim elected to Congress as well as the first African-American Congressman from Minnesota; environmental activist Bill McKibben of 350.org; and Native American activist Deborah Parker. Their inclusion reflects the Democratic Party’s changing demographics and ideologies, and each member offers fresh perspectives for the future of the American Left. Together with the extensive policy experience of Clinton’s picks, they form one of the most exciting platform committees in years.

As noted South African academic Bill Freund puts it in offering his perspective on the future of American foreign policy towards Israel,

“Netanyahu obviously sees himself making a bold play, anticipating a victory of the right-wing Republican Party in the upcoming U.S. election, and he may well win that gamble. However, Israel without U.S. support, with U.S. pressure to force negotiations based on substantial real concessions, no matter how painful, would be in a very different situation, and perhaps we can see that on a more or less distant horizon. The demographics of the United States are themselves changing in ways that will not help the American right. Supporting a Likud-type government in Israel is certainly counter to U.S. interests, and Israel under the likes of a Netanyahu is anything but a source of stability in the Middle East. The Israeli Labour Party in particular obviously picked up the message from Jewish Democrats and the Obama administration as to what could be in the cards. With serious U.S. pressure, the attitude of Labour and, no doubt, of key businessmen of Israel, so dependent on international markets and investments, would surely have to move further. This could change the odds and tip the balance to more plausible scenarios of change.”1

There are, of course, those on the radical left who balk at the very notion of incremental political change, much less incremental political change in a foreign country, engendering progress on Palestinian rights. While such claims are not entirely unfounded, one should not underestimate the United States’ tremendous political, financial, military, intelligence and cultural ties to Israel. This overwhelming foreign support from the U.S. and its allies is, after all, one of the Boycott, Divestment and Sanctions (BDS) movement’s primary arguments for targeting Israel specifically amongst arguably far more repressive states in the region, such as Saudi Arabia and Yemen.

Illogical though its detractors’ tu quoque deflections may be, the global BDS movement has largely failed to embrace a comprehensive or cohesive strategy for political engagement and education. This has consequently left the movement vulnerable to rampant anti-Semitism and those who merely desire the destruction of Israel, thereby further empowering Likud and its countless hardline allies in the GOP. If a truly effective, durable boycott and divestment of the IDF as well as Israeli companies who directly participate in the occupation is to be achieved—as Noam Chomsky, Norman Finkelstein and other prominent intellectuals quite sensibly argue should be the global BDS movement’s primary focus rather than a perilous academic/cultural boycott of the entire country—Palestinian solidarity activists must recognize the potential in deconstructing and redefining U.S. foreign policy towards Israel.

Moreover, Palestinian solidarity movements cannot exist in isolation from political realities. If those committed to the arduous but highly impactful work of restructuring institutions towards progressive ends are immediately dismissed as sellouts or neoliberals, potential partnerships and coalitions will fail to materialize—to the detriment of Palestinian refugees around the world as well as West Bank and Gazan Palestinians living under a system of state-sponsored apartheid. To maintain a perverse notion of ideological purity at the expense of substantive political change thus becomes a form of tremendous privilege for Western radicals, one that those actually suffering from the occupation simply cannot afford.