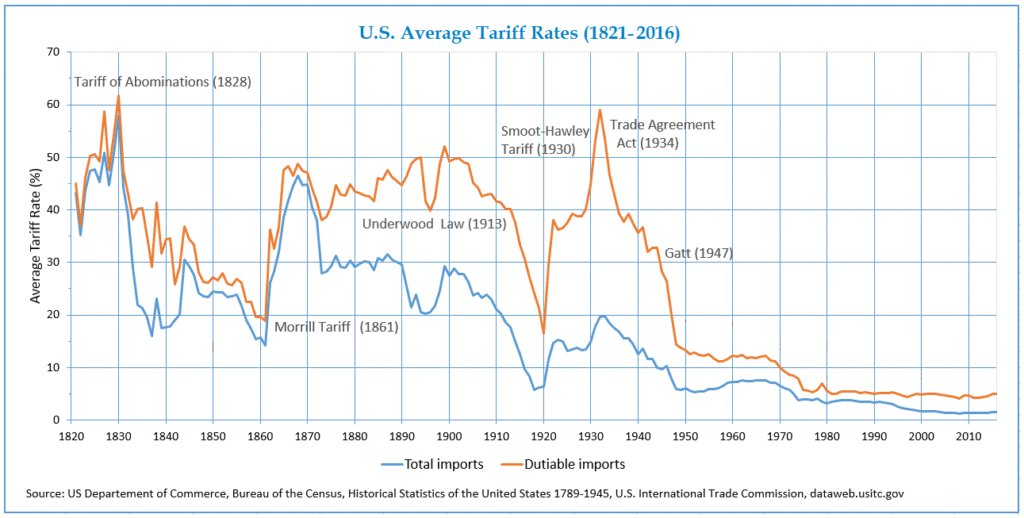 When the United States rose to international prominence in the 20th century, its championing of global markets ushered in a new era of free trade. The countries who participated quickly realized unhindered trade is the key to economic betterment; that free trade agreements like NAFTA could mutually benefit all those who participate. Today, however, President Donald Trump paints a very different picture. From the first weeks of his presidential campaign, Trump has railed against free trade, decrying other world powers, notably China, as “ripping off” the United States while insisting that trade is a zero-sum game with strict winners and losers. This sentiment is a sharp diversion from the feel-good era of free trade under Bill Clinton and George Bush in the 1990s and early 2000s, in which the world’s major nations flourished under a so-called goldilocks economy. Facilitated by international integration of capital markets, global exports relative to world GDP rose from 12.7 percent in 1990 to nearly 19 percent in 2000. Relatedly, China began to claim a significant share of total world manufacturing, largely due to a booming American economy in which GDP grew at an unprecedented rate of around 4 percent, allowing for a global economic upswing that lasted until 2008.

The recent effort by Donald Trump to channel rhetoric into action and cut perceived American losses in global trade culminated in the June 1st implementation of 25 percent steel and 10 percent aluminum tariffs on the EU, Canada, and Mexico, countries that were largely exempt from tariffs under the previously noted American policies of free trade. Under an obscure section of the 1962 Trade Expansion Act, President Trump is allowed to act unilaterally and bypass Congress, which he invoked to claim that foreign steel and aluminum constitute a threat to national security . The real threat to the United States, however, is not the current trade imbalance, which carries along with it a variety of macroeconomic factors which dismantle Trump’s simplistic populist rhetoric, but rather the impending retaliation from the host of countries Trump has targeted. From a global standpoint, as Trump begins to confront the world’s supposedly rigged trade policies by initiating an abundance of tariffs on everything from Chinese production materials to planned duties on European automobiles, he threatens not only America’s longstanding credibility as a reliable trading country, but also risks sending the country into a battle on trade, if not trade war, of ballooning proportions. Domestically, the fallout is equally destructive as the tariffs will ultimately harm American manufacturing and likely have the potential to spell political disaster for the Trump wing of the Republican party.

In no place has the international outrage at Trump’s tariff plan been more coldly expressed than at the recent G7 summit in Charlevoix, Quebec. French finance minister Bruno Le Maire, who spoke in a representative fashion for the G7 members, stated that “we cannot understand the American decisions on steel and aluminum” as Trump railed on twitter after the summit, at one point saying “Fair Trade is now to be called Fool Trade if it is not Reciprocal. According to a Canada release, they make almost 100 Billion Dollars in Trade with U.S. (guess they were bragging and got caught!).” Despite the fiery rhetoric after the G7, the World Trade Organization’s metrics the president’s claims to be unfounded. While the US weighted tariff on imported goods is 2.4 percent, lower than the EU at 3.0 percent and Canada at 3.1 percent, it is still higher than many other countries that Trump has set out to ‘correct’. Coinciding with the data, international patience seems to have waned to a point where a trade war seems all the more likely. Emmanuel Macron has called the deal  “illegal” and a  “mistake” while Justin Trudeau slammed the tariffs as “insulting” and insisted that Canada “would not be pushed around”. Aside from giving political soundbites, citizens of allied countries, like Canada, have taken it upon themselves to boycott American products and companies, refusing to buy staple products such as coffee and beers. But the real threat to Trump risks absorbing is the impending retaliatory response by countries who Trump has so recklessly attempted to take advantage of.

Rather than conceding to Trump’s demands, retaliating countries have announced plans to or have already levied additional tariffs on a plethora of other US goods or increase the rates of existing tariffs, which will in effect continue the cycle of Trump’s primary steel and aluminum tariffs. While the goods targeted have been primarily chosen to inflict economic damage in a variety of US economic sectors, an important political component of the tariffs should not go unscrutinized. It is certainly no coincidence that EU duties levied on Kentucky bourbon and Harley Davidson motorcycles from Wisconsin coincide with the Republican majority leader Mitch McConnell and Speaker of the House Paul Ryan, respectively. By pressuring the local economies of these areas, European leaders hope to ultimately exert political pressure on these leaders in an effort to force a change of hand in their support of the president’s policies. In fact, Harley Davidson, among other U.S. based companies, have already announced a shift of some production overseas, where production costs will be cheaper, perhaps representative of the real economic impact of the imposed tariffs.

Trump’s tariffs aren’t problematic solely from an intergovernmental perspective. By dramatically increasing the prices of steel and aluminum, the tariffs will have a secondary effect on US manufacturing, and eventually consumers. Perhaps the most potent example at this current time is that of the US auto industry. In 2017, the auto sector accounted for 26 percent of US demand for steel. While some steel is manufactured in the United States, the vast majority is imported from elsewhere, namely Canada, Brazil, South Korea, and China. A 25 percent levy on the cost of importing that steel, would mean that auto prices would soar, especially if manufacturers decide to pass the full cost of the tariff onto the consumer. This idea can be extended to other commodities as well, meaning everything from home appliances to aluminum cans would be subject to a price shock. If Trump decides to levy tariffs on components essential for production, manufacturers can expect to see their costs rise as can consumers.

Additionally, Trump has threatened a 25 percent tariff on actual auto imports, not just the material needed to build them. At first glance, one might consider this a protectionary measure that would bolster the American-made car market. But that’s not the case. Nearly 3 million GMs, Fords, and Fiat-Chryslers are imported every year meaning that in addition to the already increased price of imported metal, US carmakers would be hit twice by these protectionist policies. To solidify this claim, LCM Automotive, a leading researcher in the auto industry, has US car manufacturers projected to lose 1 million auto sales a year. While American commodity manufacturers such as U.S. Steel and Century Aluminum will obviously benefit from Trump’s tariffs, they account for a negligible value compared to the rest of the US market that relies on foreign imports to produce and sell goods. Further, consumers will inevitably end up on the losing side, meaning that the political ramifications could be significant for Republicans, especially those who ideologically connect with Trump. Since the tariffs will substantially hurt manufacturers and consequentially many of the blue collar working class Americans who comprise the president’s base, Trump will have a tough time selling his image as a populist champion of the American people.

As President Trump’s protectionist trade policies begin to impact markets, one has to wonder whether or not these tariffs will remain in place. On one hand, Trump is helping a small segment of his domestic manufacturing base remain afloat in a sea of competitive global prices. On the other, Trump has angered some of the most important allies and powerful people in the free world to a point where retaliation is inevitable and a full-fledged trade war seems more than likely. The scale, it seems, weighs heavily in only one of the above directions. As is, it’s time for Donald Trump to consider alternative actions that will minimize the economic disparities he is trying to correct. Instead of attacking a global trade system in which the US, as the most formidable member, has the upper hand, Trump should focus on the current fiscal deficit. He must urge Congress to reconsider the latest tax overhaul that will in time transfer billions of dollars to billionaires. He must promote education and job placement programs to correct for the country’s once formidable manufacturing base. This means reversing his disastrous tariffs that have already begun to hurt American manufacturers and the working people that depend on the jobs they provide. But given the extent of the president’s powers and his relentless insistence that the American economy will benefit from these policies, it is obvious that these ideas will never be implemented. Therefore, the only option left for America is to flip the table over, first in this year’s midterms and then in 2020.