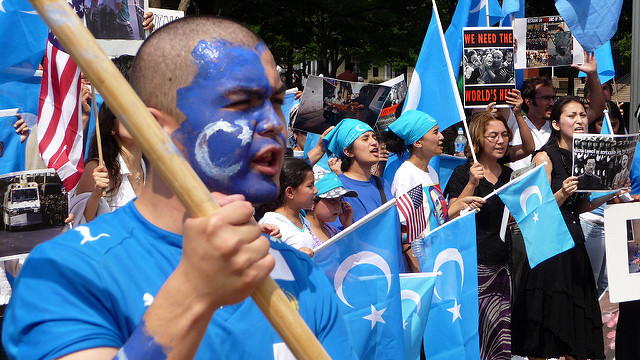 Just last month, Chinese officials ordered Chinese Muslims in Xinjiang Uyghur Autonomous Region to hand over copies of the Quran and other religious materials as part of a crackdown on “extremists.” Authorities have also tightened security measures in the region. China’s history with ethnoreligious minorities living within its borders has traditionally been turbulent, especially as the Chinese Communist Party (CCP) remains officially irreligious and predominately of Han ethnic origin. This recent government order targeting ethnic Uyghur Muslims is just one of many actions aimed at clamping down on religious and ethnic identity. However, this decision can be seen as more than just a power move to consolidate the CCP’s central authority; it is also motivated by China’s fear of Islamic extremism. The rise of the Islamic State (ISIS) and other extremist groups, many in neighbouring Central Asian countries, has placed Beijing on high alert after the sobering realization that China is by no means immune to terrorism. As China seeks to establish itself as a global player in the fight against terrorism alongside other great powers like the United States and Russia, it will increasingly link its crackdown on Uyghur Muslims to international counterterrorism efforts.

Beijing’s crackdown on ethnic Uyghurs has included bans on long beards for men and traditional Islamic veils for women. Instances of religious repression and discrimination have gone as far as enforcing what names Uyghur children are allowed to have and forced requirements to attend government schools. Such extensive enforcement of personal status laws, some argue, have only served to radicalize Uyghurs and make them more susceptible to extremist activity. As a response, the CCP has made efforts to politically and ideologically “re-educate” Uyghurs through mandatory cultural training and propaganda campaigns. The extreme isolation of the autonomous region in China’s northwest extremities has made Chinese central authorities even more fearful of losing their grip on power. Xinjiang is furthermore viewed as particularly vulnerable to foreign influence. Given its location near insurgent hotbeds in Afghanistan and Pakistan, it remains a hub for the smuggling of arms and fighters.

At a G20 Summit in November of 2015, Chinese Foreign Minister Wang Yi emphasized that China also remains “a victim of terrorism,” specifically referring to the East Turkestan Islamic Movement (ETIM) in Xinjiang. ETIM is a separatist movement made up of ethnic Uyghur Muslims that aims to bring independence to Xinjiang. China has branded ETIM a terrorist group affiliated with al-Qaeda and has used counterterrorism efforts as a pretext for increasingly repressive policies against Uyghurs. Yi further commented that the fight against ETIM “should become an important part of the international fight against terrorism.” To Yi’s defence, there is no question China has been a victim of violent terrorist attacks perpetrated by Uyghur Muslims, including the 2014 Kunming Attacks, which left 35 people dead. However, as China ramps up military and diplomatic efforts alongside increasing restraints on Uyghurs’ rights, China’s repression highlights an increasing tendency to connect its domestic efforts to the fight against Islamic extremism on a global scale.

China has emerged as a key player in both global diplomatic and counterterrorism efforts. In Afghanistan, China is a leading actor in attempting to broker a peace settlement between the Taliban and the Afghan government. Apart from commercial interests in the region, China’s involvement in these peace talks stems from security considerations, particularly the aim of preventing instability from bleeding into China. It has argued that Afghanistan remains a safe haven for Uyghur militants. China’s involvement in the peace process underlines its growing influence in key counterterrorism initiatives. However, China’s underlying incentive is to neutralize Uyghurs from falling under the influence of “radical elements” outside of China. Doing so will surely include framing the crackdown on Uyghurs as a prevention of regional instability. It also demonstrates China’s commitment to global counterterrorism efforts in Afghanistan, with which China has traditionally taken a “hands-off” approach.

In Syria, China has joined Russia in supporting the Assad regime, launching airstrikes against both the Islamic State and the Syrian opposition. China’s ambitions in the Middle East partly stem from its aversion to regime change, especially in countries with which China holds close economic and military links. China is also partly motivated by fear of Islamic extremism attracting Uyghur Muslims to join global insurgencies, specifically in areas where regime change is looming. The Syrian ambassador to China claimed that over five thousand Uyghurs were fighting in various militant groups. In 2015, ISIS released a video showing young Uyghur boys pledging allegiance to the caliphate. Their vow to return home and “shed blood like rivers” is of particular concern, as China’s porous borders increase the likelihood of insurgents reaching major Chinese cities. However, as China looks to flex its military and security capacities in the name of counterterrorism, the consequences for Uyghurs will only prove devastating.

On the regional level, Chinese counterterrorism initiatives have included not only increased surveillance and restrictions but also multilateral cooperation efforts, such as extradition treaties and intelligence-sharing agreements. The Shanghai Cooperation Organization (SCO), for example, was founded by China and is composed of many Eurasian countries, including Russia. One of its objectives is to coordinate efforts against the Three Evils of “terrorism, religious extremism, and separatism.” China’s commitment to fighting the Three Evils, while making it a proactive and credible player in the global arena, serves to legitimize repression against its own citizens. This is the double-edged sword of Chinese counterterrorism efforts. While Islamic extremism and terror are recognized as threats that carry devastating consequences, the Chinese government has framed them as threats that, in order to defeat, require authorities to apply severe repression.

The issue of cooperation with China, in the realm of counterterrorism efforts, is a product of two factors. For one, China’s definitions of terrorism and extremism often differ from a substantive notion of an actual terror threat. What China perceives as an extremist threat could be a legitimate call for greater political autonomy and recognition of liberties. Secondly, cooperation with China to defeat extremism will increasingly legitimize China’s repressive policies against Uyghurs. While the international community should condemn China’s actions, its condemnation is unlikely to have any meaningful effect. Global powers have traditionally been willing to overlook human rights abuses perpetrated by allies that share similar objectives, especially those abuses linked to allies with overlapping military or security concerns. Cooperation with China in defeating Islamic extremism could inadvertently supply the Chinese with the tools and support they need to further their domestic political ambitions. Curbing religious freedom and restricting freedom of movement via passport confiscation are actions that cannot be taken in the name of defeating the threat posed by Islamic extremism. In fact, repression and coercion only contribute to growing radicalization amongst an already grievance-filled ethnic minority.

As the threat of extremism increasingly becomes a reality, China will seek to justify its repression of Uyghur Muslims as legitimate by framing the issue as just another frontier in the worldwide fight against terrorism. However, the human rights situation in Xinjiang is too dire for the international community to simply turn a blind eye. Partnering with China to fight terrorism can present itself as a very beneficial opportunity but not at the expense of ignoring the current situation in Xinjiang. Cooperating with Chinese security forces would enable an increase in state power that would surely be used to silence demands for ethnic, religious, or cultural expression. While the international community and human rights organizations have —and should— condemn China’s repression against Uyghurs, their condemnation is unlikely to have any meaningful effect due to the nature of China’s commitment to global counterterrorism efforts. And to have real success in fighting the actual threat of terror and extremism, both domestically and abroad, Beijing must stop conflating Uyghur resistance with a substantial terror or extremist threat. Doing so risks alienating peaceful Uyghur Muslims that bear the brunt of religious repression.