The Earth Needs a Lawyer Too: Making Ecocide an International Crime 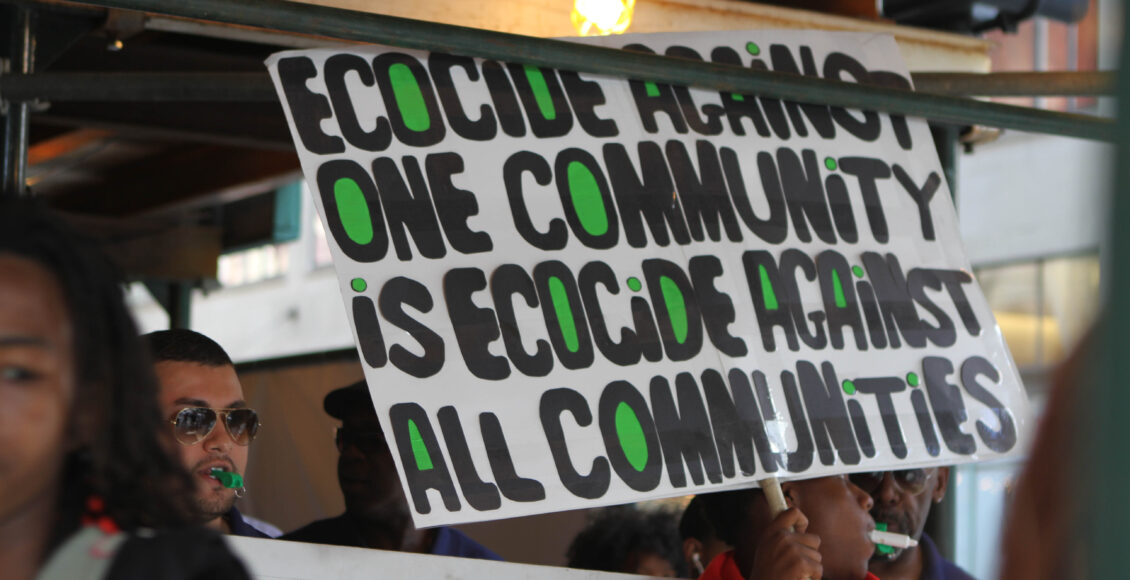 In June 2020, France reached a crucial environmental milestone. The French citizens’ climate assembly voted in favour of establishing an ecocide crime in France, with 99 per cent voting in support of the proposal. Since then, French President Emmanuel Macron has become one of the movement’s highest-profile supporters,  promising to champion the creation of an ecocide crime under international law. He claims that in regards to climate change, the “mother of all battles is international.”

Ecocide refers to the destruction of the environment by human action and would encompass acts akin to the scale of genocide in terms of climate, such as oil extraction. The first high-profile use of the term occurred in 1972, when Swedish Prime Minister Olof Palme referred to the Vietnam War as an example of ecocide. Yet, its major revival came in recent years, as a result of Scottish lawyer Polly Higgins co-founding the Stop Ecocide campaign in 2017 with current Chair Jojo Mehta.

The aim of the Stop Ecocide campaign is to make damaging ecosystems an international crime under the jurisdiction of the International Criminal Court (ICC). Activists explain that we are facing the climate emergency because of decades of widespread, unrestricted harm to nature. They believe that an international ecocide crime is necessary to remove the impunity of those in power harming the environment. Making ecocide an international crime would close a major gap in international law that has allowed the perpetrators of mass environmental destruction to go unchecked.

Widespread Support for an Ecocide Crime

Calls to criminalize ecocide have particularly increased in the last year. In December 2019, Vanuatu Ambassador John Licht became the first state representative since 1972 to suggest serious consideration of an international ecocide crime, which was supported by representatives of the Maldives. Under particular threats from rising sea levels, small island nations have frequently called for action against climate change and support from developed wealthy nations has started to increase as well. In October 2020, two motions were submitted to the Swedish parliament calling for the criminalization of ecocide and the Belgian government pledged to recognize an ecocide crime domestically and internationally. Pope Francis has also called for an international ecocide crime and proposed to make it a sin. This international level discourse has been encouraged by young activists, including acclaimed environmental advocate Greta Thunberg and Nobel Peace Prize Laureate Malala Yousafzai. Support for the movement is clearly widespread, but how would ecocide become a crime?

The ICC currently has jurisdiction over four crimes: genocide, crimes against humanity, war crimes and crimes of aggression; the ICC can only act on environmental harm when it occurs within the context of these crimes. This fails to impose legal restrictions on peacetime ecocide. Interestingly, the draft of the ICC’s establishing treaty, the Rome Statute, initially included 12 crimes, one of which was deliberate, severe damage to the environment. However, ecocide was removed from the final draft, mainly due to pressure from developed wealthy nations.

The goal for climate activists now is to find a head of state of one of the ICC’s 123 member states willing to propose an ecocide amendment to the Rome Statute. With the support of mounting pressure from civil society, many activists are hopeful.

The Limitations of an International Ecocide Law under the ICC

Although activists see an international ecocide law as a crucial next step in fighting climate change, there are challenges to achieving this reality. Firstly, in terms of scope and effectiveness, the ICC has limitations. Among others, ICC member states don’t include the United States, Russia, China and India. The dozens of Rome Statute non-signatories significantly limit the scope of the ICC. However, activists have pointed out that even if climate culprits reside in non-member states, such as the US, American CEOs and politicians could still be tried for overseeing ecocide within a signatory country, largely removing scope concerns.

Another challenge to a potential ecocide crime is that the ICC can only prosecute individuals. A whole corporation could not be indicted, leading some critics to wonder if bringing down a CEO would change the ecocidal acts of an entire business. But activists explain that their goal is not the sudden mass incarceration of ecocide perpetrators. Their hope is that the threat of international criminal prosecution would establish a deterrent, and hopefully lead to meaningful policy changes.

The Necessity of an International Ecocide Crime

In November 2020, Stop Ecocide convened a panel of top international and environmental lawyers to create a legal definition for ecocide. Mehta emphasizes the necessity for a legal framework, explaining that, “CEOs have an obligation to maximize profit within the law,” meaning there is nothing stopping them from harming the environment until ecocide becomes a crime. An ICC ecocide crime would carry symbolic weight and acknowledge that ecocide perpetrators are guilty of mass destruction.

Despite potential challenges, it is undeniable that holding ecocide perpetrators accountable and deterring further harm to the environment is an urgent necessity. In 2019, the world watched in horror as the Brazilian Amazon Rainforest was burned at a devastating rate. This deforestation was encouraged by Brazilian President Jair Bolsonaro. If ecocide were an international crime, Bolsonaro could be tried by the ICC.

Similarly, despite Canada’s attempts to develop its climate leadership, federal and provincial governments still push for the expansion of Alberta’s oil sands. Tar sands have been considered the largest, most destructive industrial project in human history, with higher environmental costs than other sources of oil. Canada’s tar sands are an example of mass environmental destruction; another case of ecocide that would fall under ICC jurisdiction should the crime be created.

Ecocide is a global problem that needs an international solution

The four crimes currently under ICC jurisdiction are meant to encompass the most serious threats to the international community. But this group of crimes is missing another huge threat to humanity: climate change.

A larger system is at work that not all humans are equally complicit in sustaining; responsibility for the climate crisis falls on those with the power to change systems. Individual lifestyle changes are important but insufficient to combat the global threat of climate change and with every year of inaction, emissions rise and we move closer to the point of no return. Decision-makers must be held accountable so that a mass policy and mindset shift can occur.

The world’s balance of power could shift with the implementation of an international ecocide crime, which would deter environmental destruction. Executives could no longer easily damage the environment, while the fight against climate change would be officially backed by international law. Climate change itself has no respect for sovereignty, making environmental issues a global challenge requiring international solutions. The ICC is a flawed international court and making ecocide a prosecutable crime will be a challenge, but one that we have no choice but to overcome. With the work of dedicated activists, and increased state recognition, the world is moving closer to that possibility.

The Earth has been hurting for years but it can’t protect itself from us. As Higgins said, “the Earth needs a good lawyer too.”

Featured image by thegirlone is licensed under CC BY-NC-SA 2.0.