The Economics of Oil 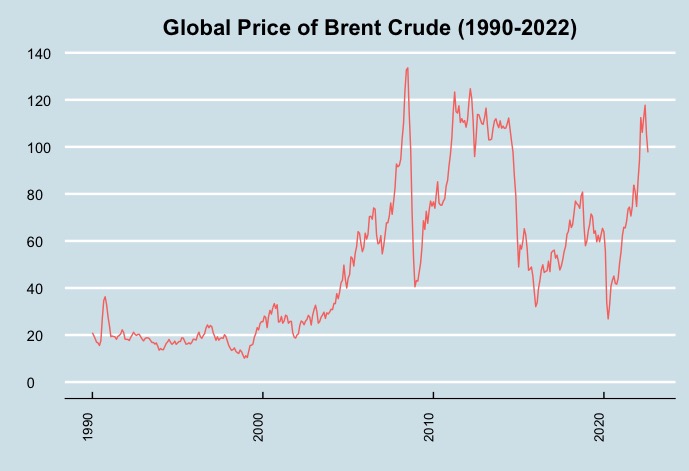 For the first time in recorded history, the price of oil dropped to negative values in March 2020. Then, prices increased steadily, climbing to 120 USD in June this year. More recently, on October 6th, Morgan Stanley increased its forecast for the price of Brent Crude in 2023 from 95 USD to 100 USD. Like those of other commodities, the determinants of the price of oil are the familiar forces of supply and demand, themselves influenced by the global economic and political scene. The ongoing war in Ukraine, OPEC politics, and the slowing down of the global economy are behind this tumultuous evolution of oil prices and will certainly influence its future trajectory.

In economics, elasticity is the responsiveness of the quantity supplied or demanded to changes in the price. For instance, the demand for toilet paper is fairly inelastic because it is an essential good, so consumers will continue to buy it at similar rates even after a price change. On the other hand, textbooks are elastic goods because inexpensive online alternatives are widely available. As oil is the key ingredient of the transportation industry, which is fundamental to every other industry, oil is a highly inelastic commodity. For perspective, the elasticities of demand and supply of oil are both 0.1, whereas the mean price elasticity of demand for toilet paper is 0.92. Given that the demand for oil is inelastic, consumers will not respond to a price change by changing their demand. As there won’t be a demand decrease factor to offset a price increase, the price of oil can be very volatile.

In 2020, most countries limited non-essential economic activity, implemented stay-at-home orders, and restricted travelling. As such, in Canada in particular, GDP contracted by 7.5 per cent in March and 11.6 per cent in April. With this hindered economic activity, the demand for oil declined sharply. Asia’s six biggest economies, which account for 50 per cent of worldwide oil imports, decreased oil demand by 8 million barrels per day in March. Consequently, Saudi Arabia proposed to Russia and its fellow OPEC members to cut back on oil production. However, Russia would have had to cut production by 500 thousand barrels per day. This led Russia and Saudi Arabia to start a price war, causing the price of oil to drop by 24 per cent on March 8th, 2020. In the case of oil, a price war refers to a situation in which producers competitively decrease their prices in an attempt to attract greater demand for their production.

The price of oil was falling quickly due to the price war and the simultaneous decrease in demand caused by the pandemic. However, it should be noted that while goods may become worthless over time, they rarely have negative prices. Oil is traded using future contracts, meaning that two parties agree to exchange oil at a particular price on a future date. These financial instruments are traded by speculators who do not wish to consume the oil but seek to profit from price changes. However, in April 2020, these speculators were going to have to physically receive the oil shipments covered by their future contracts if they did not find someone to sell their contracts to. Driven to avoid this position, speculators began paying other traders to take over their contracts, causing the price to fall even further. The outcome was that the price of oil crashed to about negative 38 USD.  Eventually, lockdowns ended, and the price of oil recovered to 75 USD per barrel in January 2022.

In February 2022, oil made headlines again because of the impact that the Russian invasion of Ukraine had on supply. Russia is the second largest oil producer, accounting for 16.6 per cent of the total natural gas supply in 2020. Nevertheless, after its invasion of Ukraine, numerous countries imposed sanctions against Russia, including total bans on oil exports to the US and Great Britain. Following this reduction in global supply, prices increased.

Of course, oil is also a major component of gas, which saw its price in the United States peak at 5.02 USD per gallon in June 2022. This represents a drastic 63 per cent increase in gas prices compared to June 2021. The cost of oil has also been taking an increasing proportion of the price of gas, from 25 per cent in 2020 to 52 per cent in 2021 and a significant 60 per cent as of April 2022.

In response, the Biden administration took matters into its own hands to alleviate the harmful effects of increasing gas prices in an economy already facing high inflation. President Biden travelled to Saudi Arabia in an attempt to persuade Prince Mohammed bin Salman to increase the Saudi supply. However, according to experts, although Saudi Arabia has the greatest capacity to increase oil supply, it would not be able to decrease prices because the Russian supply was still decreasing dramatically. In addition, Washington authorized Chevron, one of the few American oil companies left in Venezuela, to start negotiations with the Maduro administration regarding restarting production previously stopped by American sanctions. The objective of this contentious political decision is clear – increase the supply of oil and decrease its price.

More recently, in September, the G7 countries decided that instead of fully halting their consumption of Russian oil, it would be more convenient to place a price ceiling on its price. This price ceiling would be an exception to any sanctions, limiting Russian profits while inhibiting oil price increases. However, in October, Russia and the OPEC cartel agreed to cut oil supply by 2 million barrels (or 2 per cent of global production) per day. This immediately increased the price of Brent crude by 1.5 per cent.

The volatility of the price of oil in recent years is not a consequence of a single event or action. Be it the pandemic, the price war, sanctions on Russia, or the inherent inelasticity of oil, political and macroeconomic factors shape global supply and demand. While war and global health crises may be unpredictable, shifts in supply and demand will inevitably fluctuate prices.