The Epilogue of Wars in the Former Yugoslavia – Justice Denied 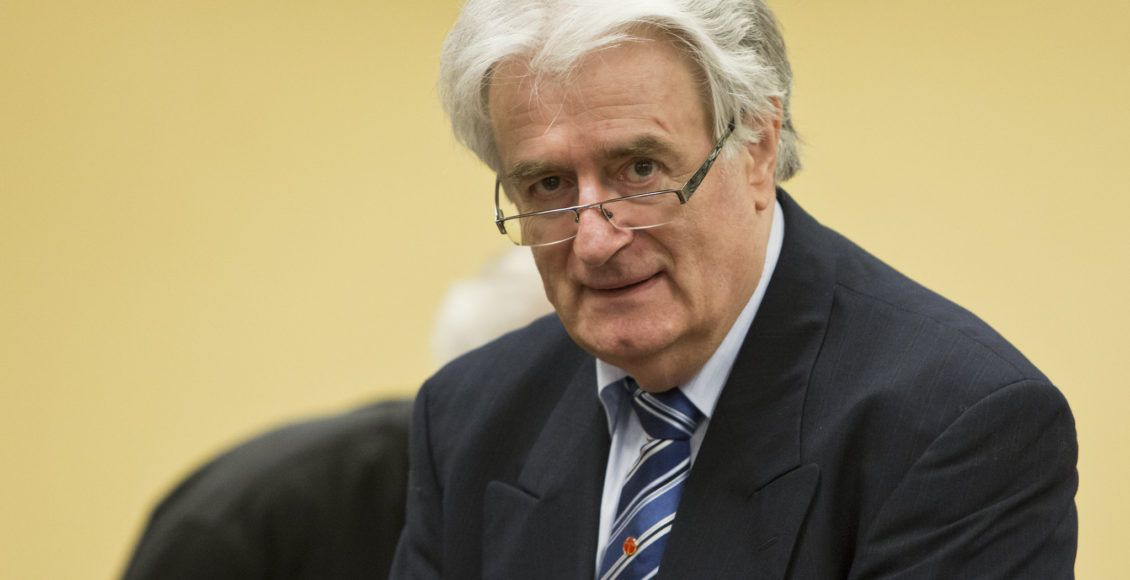 When the Nürnberg and Tokyo trials held Goering and Tojo to the stand, they were not only sentencing select criminals, but more importantly an entire ideology. The Nazi and Imperial Japanese regime were tried in a system of moral values which unequivocally condemned nazi-fascism and other forms of irredentism. Following the horrors of World War II and the Holocaust, there was no doubt for anyone, let alone legal experts, of the criminal nature of such ideologies. The trial of these ideologies was both a juridical and moral imperative. It seems the same cannot be concluded for the International Criminal Tribunal for the former Yugoslavia (ICTY).

Last week, the world witnessed a somber moment for the institution of justice. Former President of Bosnian Serbs, Radovan Karadžić was sentenced to 40 years for the murder of 8,373 men and the deportation of over 30,000 women, elders, and children from the municipality of Srebrenica. However, the Tribunal did not find Karadžić responsible for subsequent genocide in the municipalities of Bratunac, Foča, Ključ, Prijedor, Sanski Most, Vlasenica, and Zvornik where over 11,000 civilians were systematically executed. In Prijedor, Serb forces ordered all non-Serbs to mark their houses with white and wear white arm bands to distinguish between groups. When the municipality was liberated in 1995, bodies of 3,173 civilians were discovered along with an internment camp housing 31,000 non-Serbs from Prijedor. A pre-war census had 50,000 Bosniaks and 6,000 Croatians inhabiting Prijedor; today those numbers are 6,000 and 3,000 respectively. 40 years in prison for such atrocities is but a mere slap on the wrist to the criminal regime of Karadžić and Milošević. Nonetheless, justice served is justice granted to the victims and their close ones. Unfortunately, not all can say they were granted the “honour” of justice last week. While Karadžić received some sort of sentence, president of the Serbian Radical Party Vojislav Šešelj was allowed to walk after being acquitted of all charges.

Šešelj began his path to “justice” in November of 1991, following the fall of Vukovar. After 87 days of heavy barrage, Šešelj’s platoons and the Yugoslav People’s Army transported 264 men and one woman from the Vukovar hospital to Ovčara, a field 8 kilometres away. There the patients, doctors, and soldiers were held overnight, often brutally tortured, for which three officers were convicted a total of 47 years. On the eve of the 22nd of November, Šešelj’s Četniks executed and buried the bodies of all 264. An additional 8,000 Croatian nationals were interned in Serbia, while 25 years later 306 individuals remain missing. The judges concluded that  Šešelj was not responsible for war crimes and crimes against humanity, but of merely propagating ethnic nationalism.

The United Nations defines genocide as “any of the following acts with intent to destroy, in whole or in part: killing members of the group; causing serious bodily or mental harm to members of the group; deliberately inflicting on the group conditions of life calculated to bring about its physical destruction in whole or in part; imposing measures intended to prevent birth within the group; and forcibly transferring children of the group to another group.” It is estimated that 269 Catholic Churches and 614 Mosques were destroyed in Bosnia and Herzegovina, by Serb militias. Of the identified 97,207 civilian deaths in Bosnia and Herzegovina, 83% were Bosniaks. Roughly 200,000 Bosniaks and Croats were resettled from what is today Republika Srpska, a Serb majority constituency within Bosnia and Herzegovina. This is the ideology of Vojislav Šešelj at work.

With Šešelj’s acquittance from the ICTY, the brutal irredentist ideology has received an upheaval and continues to see daylight in Serbia. Upon a recent visit to N1 TV in Belgrade, Šešelj did not hold back in his war mongering rhetoric. The self-proclaimed Četnik Duke, stated that he does “not recognize the Croatian state as long as the occupation of the so-called Republic of Serbian Krajina persists”. He concluded by adding that his liberation was a “defence of Serbian nationalism and the political project of a greater Serbia.” Rewind 71 years to 1945 and the Nürnberg trials. Such remarks would be akin to Josef Dietrich, head of the Nazi Waffen-SS, going on national television and saying the Holocaust has not met an end or that the idea of a greater Germany lives on.

In the interim, Serge Brammertz, chief prosecutor of the ICTY has already issued an appeal to the acquittal. Šešelj’s condemnation to decades in prison would undoubtedly bare well-deserved satisfaction, but also be a kind of self-deception. Unlike Herman Goering and Hideki Tojo, Šešelj has won. The goals and ideals he set out for himself have been achieved. Separate nationalist enclaves have been achieved in Bosnia and Herzegovina and Kosovo; intellectual and political leaders of other ethnicities have been murdered or exiled. Following his release, Šešelj’s ideology of patriotism, historical revisionism and irredentism enjoys the status of Sainthood by all those who are so forcefully trying to mask their support. As long as this is the case, justice will not be served.

The featured image “Start of Defence Case: 16 October 2011” by the UN International Criminal Tribunal for the former Yugoslavia is licensed under CC BY 2.0.