The Far-Right Won in Italy – What’s Next? 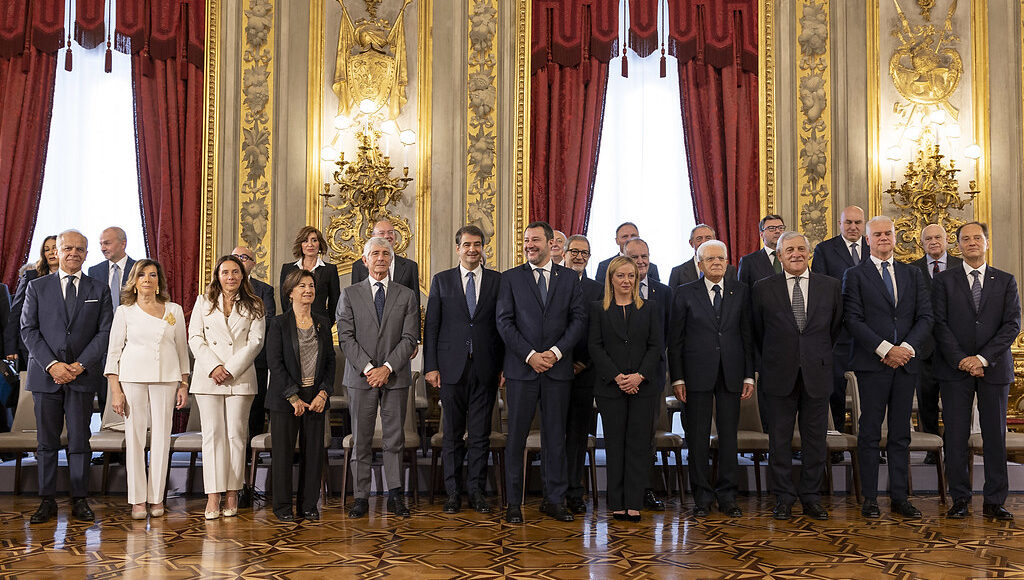 Giorgia Meloni, the leader of the post-fascist party Brothers of Italy, won the September 25th legislative election and is the new President of the Council – equivalent to Prime Minister. This is a major shift, not only in Italian political history, but also for the European Union as one of the largest European countries is now ruled by a far-right government. Meloni’s election is highly symbolic because 2022 marks the hundredth anniversary of Benito Mussolini’s March on Rome, which brought him to power and established a fascist regime that lasted until 1943.

The access to power of Meloni’s far-right is a political revolution in the country, and is in clear rupture with Italy’s political trajectory since the end of World War II. However, the far-right governmental coalition faces internal divergences that could threaten its viability. Nonetheless, the alliance could significantly shape Italian politics and its relationship with historical allies.

Giorgia Meloni’s election in September is a landmark in Italian history because the far-right had not been in power since the fall of Mussolini in 1943. The Brothers of Italy – the party Meloni founded in 2012 – is a post-fascist party inherited from Mussolini’s ideology. For instance, the Brothers of Italy’s logo was inspired by that of the Italian Social Movement (MSI) – the fascist party created by Mussolini’s supporters after the war. Meloni herself described him as “a good politician” during her younger years in politics.

Far-right political parties were very marginal in the Italian political system until a couple decades ago. The Brothers of Italy used to be a small party, and Meloni only incrementally emerged as a major political figure over the last few years. For instance, the party collected only 4.3 per cent of the vote in the 2018 legislative election, but won the recent September legislative election with 26 per cent of the vote. The Italian far-right movement has benefited from the normalization of far-right parties in Italian politics since 1994, when Silvio Berlusconi first took power, but especially during his second term starting in 2001. Moreover, Meloni’s victory relates to the weaknesses of her rivals on both the left and the right. There have been three different governments with completely different political agendas since the last legislative elections in 2018, and former governing parties on the right and the left thus lack credibility to Italian voters. Meloni also benefited from her decision not to involve her party in the failed national union government led by Mario Draghi that collapsed this summer due to internal divisions after a year-and-a-half in power.

Meloni’s government is in clear rupture with Draghi’s. He formed a national union government in which all major Italian parties took part, except the Brothers of Italy. The Draghi-led government’s goal was to bring Italians together to fight great challenges that have affected Italy in the past two years, such as the pandemic and inflation. On the contrary, Meloni was elected on a divisive and nationalist platform. Indeed, it may appear as a surprise that Meloni’s conservative platform has given her the title of first female President of the Council in Italy.

Three major parties form the governmental alliance under Meloni. Meloni’s Brothers of Italy govern with the far-right League led by Matteo Salvini, and former President of the Council Silvio Berlusconi’s right-wing Forza Italia. The Brothers of Italy is the most powerful party of the alliance, controlling nine ministries compared to its two partners’ five each. It is a conservative and nationalist coalition, calling for restrictive immigration policies and challenging abortion and LGBTQ rights. These three issues were major features of all three parties’ platforms. The Meloni-led alliance seeks to alter public policy on these issues and seems to align itself with Mussolini’s slogan that Meloni used repeatedly during the campaign: “God, homeland, family.”

Nevertheless, some political divergences within the governing coalition could lead to defections and the collapse of the alliance. For instance, members of the coalition have already expressed disagreement over foreign policy. Meloni is a staunch supporter of NATO and affirmed her commitment to help Ukraine in fighting the Russian invasion. However, Salvini and Berlusconi are known for their close ties with Putin. They both have been more reluctant to show their disapproval of Russia’s invasion, and are against the economic sanctions established against Russia, arguing that they undermine the Italian economy.

Furthermore, political tensions and personal rivalries between the leaders of the coalition could also threaten its longevity. Namely, Salvini and Berlusconi’s political ambitions could undermine the coalition’s stability. Both saw their popularity decline during Meloni’ ascension in the Italian political landscape. Frustration led them to make remarks criticizing her leadership. Moreover, Meloni used to be a cabinet member of Berlusconi’s government from 2008 to 2011, but left her minister to launch her political career by founding the Brothers of Italy. As such, the rise of Meloni boosted resentment in Berlusconi’s camp, and Berlusconi even referred to the new President of the Council as a “pain in the ass.”

What to Expect of Meloni’s Mandate

Meloni’s alliance holds the majority in both the upper and lower parliamentary houses, and therefore has the means to significantly alter public policy. However, the Italian electorate has been very volatile in recent years, and the coalition could lose support quite quickly since it did not win in a landslide. Additionally, the new government will face tough economic challenges in implementing its agenda because of the looming economic crisis and inflation. Indeed, in the last few years, several Italian governments rapidly lost backing by the population. For instance, the populist Five-Star Movement, which gained power in 2018, quickly fell out of favour after failing to fulfill platform promises.

Meloni rejected Mussollini’s 1938 racial laws in her opening speech to Parliament, and despite her fascist ties and her anti-system stance, she seems to be more moderate than expected. Meloni is aware of the Italian electorate’s concerns about her government, and she is careful not to provoke them further. That said, Meloni laid out her plan to enact a strong anti-immigrant policy during the campaign. Her Interior Minister – Matteo Piantedosi – recently called for closing ports to boats rescuing migrants in the Mediterranean Sea. Meloni’s election not only raised concerns in Italian society, but also among its European partners. France has already clashed with the new Italian government over migrants’ treatment. Human Rights Watch also warns that Meloni’s government poses a threat to human rights levels in Italy. The NGO expects a drop in refugee rights, reproductive rights, and worries for the LGBQT+ community because the new President of the Council has shown her animosity towards what she calls the “LGBT lobby.” Finally, Italian journalists also fear that the new government will challenge press freedom.

Giorgia Meloni’s election is a turning point in Italian history, disrupting Italy’s democratic legacy and trajectory since the fall of Mussolini in 1943. This political revolution brings out new challenges for Italy and the European Union. Nonetheless, the new governmental alliance will face the test of securing stability despite its internal divergences and political rivalries. The next months will be telling of the extent to which Meloni will reshape Italian politics.

Featured image by Ministero Difesa is licensed under CC BY-NC 2.0