The Future of the Millennium Development Goals 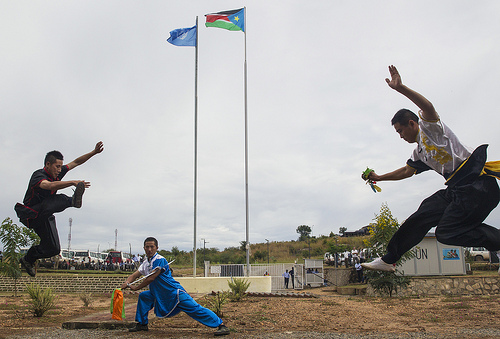 One of the principal problems with the MDGs is that they were stipulated without reference to the initial conditions of a country.[2] As a result of this narrowness, the efficiency of international actors in meeting the MDGs suffers. Evidence can be found in the widespread disparity in the achievement, or lack thereof, of the MDGs.[3] Some countries will reach most of their MDGs, some will reach a few, and some will reach none.[4] There are multiple reasons for this discrepancy, all of which can be traced back to the fact that the MDGs were stipulated without regard to the nuanced and particular characteristics of states. First, the MDGs specify an outcome, but do not set out the process that would make it possible to realize the objectives in a given country.[5] Second, the global goals are often misconstrued as being national objectives, without regards for the significant differences in national priorities.[6] Third, and more pragmatically, human deprivation is localized in certain regions that allows for the illusion of overall growth, when capacity gaps persist in reality.[7] Indeed, the MDG Gap Task Force Report outlines the delivery, capacity, and needs gaps between global commitments and the delivery thereof.[8][9] Ultimately, the problem is that the current approaches towards meeting the MDGs fall susceptible to bureaucratic universalism.[10] This ‘one size fits all’ notion renders the current approaches inefficient.

Recommendation One: To increase efficiency, we must focus on localizing issues through policy implementation that respect the capacity gaps of a given country. In effect, the solution is to renew efforts of meeting the MDGs in terms of tailoring the MDGs in the local context. This can be done by formulating local level strategies, mobilizing resources locally and developing local capacities and institutions.[11] This helps us escape the universalist notion, and thus is a logical solution the problem of inefficiency. By localizing issues, we can focus on pockets of deprivation and enforce targeted interventions.[12] Further, reinforcing the norm of localization will encourage states to design and implement development strategies that are tailored to their specific situation. In effect, this can strengthen domestic capacities and enable conditions for local communities.[13] Ultimately, the localization of issues will increase the international system’s efficiency in meeting the MDGs. Using new localized methods of policy assessments, monitoring, and implementation, we can move into the post-2015 period addressing the problems of the past with solutions for the future.

It is a mistake to believe that because the MDGs are aimed at states, it follows that states should be the principal actors in the pursuit of the MDGs. Often, states lack the legitimacy to conduct certain actions or pursue certain policies.[14] Indeed, in most of the countries in the world, centralized governments have spearheaded the MDGs despite the fact that MDGs are by nature sectoral.[15] In effect, governments and ministries of finance have taken the lead without giving adequate voices for sectoral ministries like agriculture and health – which can, for example, offer valuable insight to eradicating hunger and reducing mortality rates (goals one and four respectively).[16] Private actors – a crucial actor with regards to development – have also failed to be integrated in the international process of meeting the MDGs.[17]

More notably, the lack of support from international institutions hurts legitimacy significantly. Bretton Woods Institutions have publicly expressed their apathy towards the MDGs.[18] Indeed, the International Monetary Fund has admitted that the MDGs “don’t change anything.”[19] Not only does the IMF’s public declaration of the MDGs inefficiency hurt international legitimacy, but also the IMF’s financial behaviour. In effect, the IMF is prescribing pro-cyclical policies that constrain public spending like public sector wage freezes, minimum wage cuts, and subsidy elimination to fuel, gas, and electricity.[20] Ethiopia, Ghana, Sierra Leone, and Zambia are all examples of the IMF intensifying recessionary trends by pushing states to tighten monetary policy.[21] Ultimately, the MDGs cannot be satisfied if there lacks external coordination in the international system. Currently, international actors function as individual agents, rather than as a collective entity. Thus the current approach towards the MDGs is neither efficient nor legitimate.

Recommendation Two: It follows logically from the premises above – the lack of non-state actors and the need for the localization of issues – that we should better integrate transnational interests. In effect, the involvement of private sector actors, NGOs, regional institutions, and representatives of civil society can enhance legitimacy. These actors can better address the sectoral nature of the MDGs. Thus, by integrating non-state actors, we can better localize issues.

Whereas a state actor’s primary concern is security, non-state actors have larger transnational concerns. These concerns, like human rights, represent a common good that transcends the sum of state interests.[22] NGOs are beneficial in that they represent unique and particular interests.[23] For example, the Red Cross or Médecin Sans Frontières (MSF) are seen as more legitimate mechanisms to access marginalized areas because these organizations are not concerned with security interests, rather they are mandated to represent humanitarian interests. By creating a forum for different interests, legitimate compromise can be achieved. This does not fall susceptible to the perpetual cycle of narrow interests that state actors operate within. State actors are locked in bureaucratic universalist logic.[24]

The success of the ILO’s tripartite structure is evidence of a multilateral mechanism that has garnered legitimacy and can address global problems. [25] In the post-2015 period, if the pursuit of the MDGs is also founded on the principles of multilateralism, legitimacy will manifest itself, and progress will be achieved. Non-state actors are able to fuel debate, increase transparency, promote accountability, and enhance the democratic legitimacy of the rules that govern global relations.[26] Effective governance requires regulation that achieves not only efficiency and order, but also public participation and public accountability.[27] The involvement and integration of non-state actors is a step towards the latter.

Likewise, IFIs have similar potential and have a lot to offer: resources and favourable policies being two of many. Official Development Assistance (ODA), a medium of international aid, is very important to a developing country trying to meet the MDGs. The problem is that in times of economic downturn, IFIs cut down on ODA.[29] However, such financial and economic crises should not be used as an excuse to decrease ODA, rather such crises strengthen the case for devoting more resources towards the MDGs.[30] A closely related constraint is the lack of an international debt resolution mechanism that can guarantee an efficient solution to a sovereign debt crisis. With respect to the Stiglitz Commission (2009), the South Centre (2009) and the Group of 77 (G77) proposal, there is an international consensus that calls for the creation of an independent debt arbitration court that can provide a framework for debt relief.[31]

The cooperation of IFIs is crucial for the establishment of such a mechanism. Without the support of IFIs – often the largest international organizations – the achievement of MDGs is unfeasible. Ultimately, we must stress the importance of strengthening international and regional institutions for cooperation in order to provide effective support to national development strategies and to sustain reforms for a more conducive international environment for development.[32]

[1] Bruce Cronin, “The Two Faces of the United Nations: Between Intergovernmentalism and Transnationalism,” Global Governance 2002

[14] Bruce Cronin, “The Two Faces of the United Nations”

[22] Bruce Cronin, “The Two Faces of the United Nations”