The Garbage Crisis in Lebanon: Revealing the Political Failure 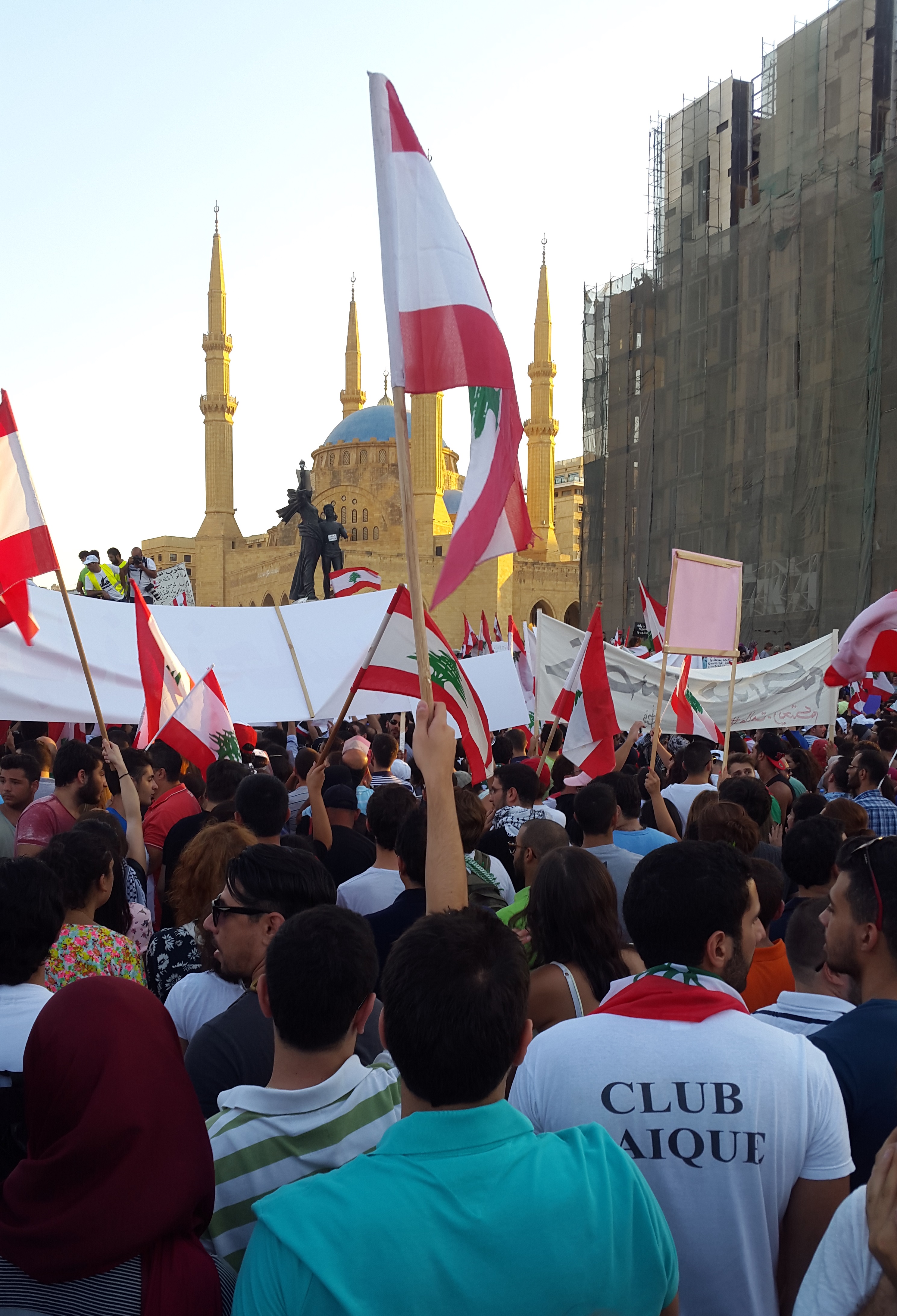 Demonstrators at a protest on Martyr Square, Beirut, in August 2015. (Image from Wikipedia)
Share

“Arrogance is colored and the Power is a rainbow”. “People are the source of power: leave, thieves and criminals”. These anti-government slogans, seen in the streets of Beirut on September 22, show more clearly than any poll the state of public opinion in Lebanon. Indeed, in this country with 4.5 million inhabitants, very few still support a political elite that has failed to elect a president, is perceived as corrupt, and cannot provide solutions to the growing social and environmental crisis.

“You stink”: the crisis that started it all

In January 2014, some residents of Beirut, along with a few activists, started to call on the government to close the nearby Naameh landfill as it had far overreached its capacity and was becoming a problem for the safety of the environment. When the landfill opened in 1996, it was supposed to close after 2 years and had been designed to receive 2 millions tons of garbage; yet it remained open 19 years later and held more than 15 millions tons of garbage. At the time, these citizens did not know they had begun a process whose consequences are still unfolding for Lebanese society. A year-and-a-half later (on July 17, 2015), when the government finally closed the landfill located in the mountains southeast of the city, the garbage from Beirut and Mount Lebanon quickly overflowed the streets of the capital city. This was largely because the waste management company, Sukleen, refused to collect the garbage because it simply could not store it all. The government – and Sukleen – had not anticipated the consequences of their decision to close the landfill even though everything that happened was predictable. In response to this, massive protests quickly began and, in August, thousands of Lebanese went into the streets of Beirut to ask for a solution. Surprisingly, all sectors of society gathered behind the slogan “You Stink!” regardless of religious or political affiliation. Indeed, they all saw the political elite as corrupt and disregarding of “…our health, our wellbeing, and our rights as citizens of this country,” as was said by a local entrepreneur to Al Jazeera.

As time passed and the status quo was maintained by political inaction, the demands became broader among the protest movement. In addition to the request for basic rights, such as proper access to water and electricity, and, of course, that the garbage be collected, many of the citizens are now expressing a more global discontent with the government. They are asking, for example, for the resignation of the Environment Minister, Mohammad Machnouk, as well as for socio-economic reforms. However, perhaps the most striking request is that new parliamentary elections be organized. Indeed, the Lebanese parliament has already extended its mandate which was supposed to end on June 20, 2013. The Members of Parliament decided, under the 2013 security situation, to stay in office for four more years without elections. People no longer seem to be willing to accept this situation, regarded as anti-democratic, and are asking for Parliamentary elections as it is the only way for them to get a proper representation and a new president. It has been indeed more than a year since the last president left office. In light of this situation, a worrying feature of these protests is that even though they started peacefully – with families coming to the demonstrations, or a sit-in in front of the Parliament on August 22 – they seem to be moving toward a more violent kind of confrontation. It started on August 22, when police used violence against the protesters (which added a request to the list held by protesters: that those responsible for the shootings be judged). Thus, some young people, members of “marginalized segments of society” (as described by a protester talking to Vice), are now confronting police forces face-to-face. This led an editorialist at L’Orient-Le Jour, a Lebanese-francophone newspaper, to warn: “This is no longer a civil movement, apolitical and non denominational, protesting against corruption and the authorities’ incompetence, but an intention to make the country slide toward political conflicts with a denominational (religious) colouring.”

In this way, fear and violence are slowly contaminating a society haunted by its past civil wars and its current confessional divisions – accentuated by the growing number of migrants mainly coming from Syria, as well as by the tensions between Iran and Saudi Arabia. This changing situation is only the social reaction to a political crisis lasting since many years due to what can be called the failure of Consociationalism, a political contract guaranteeing social harmony. Defined by Arend Lijphart, “consociational democracy means government by elite cartel designed to turn a democracy with a fragmented political culture into a stable democracy” (Consociational democracy, A. Lijphart, in World Politics, Vol 21, n.2, Jan. 1969. p.216). This power sharing is made effective by a grand-coalition government; in other words: a government in which all sectors of society are represented. The decisions are not reached by a majority vote, but by consensus. Moreover, the communities remain autonomous in all matters not of common concern. In Lebanon, this translated into a National Pact that was first implemented in 1943. This pact shared power equally between the three main communities of the country. Reflecting the population, the members of Parliament were elected on a ratio of 6 Christians per every 5 Muslims and Druze combined. Moreover, the President had to be Christian, the Prime Minister Sunni, and the Speaker Shia. From 1943 to 1975, the system functioned quite well. However, the civil war ended the agreement and it is only two decades later that the country could go back to a form of consociationalist democracy. Some changes were brought, especially in Parliament, taking into account the new demographic reality: since the 1989 Taif Agreement, seats are equally shared between Christians and Muslims.

Today, consociational democracy in Lebanon seems to be broken: the Change and Reform Bloc – the largest Christian Bloc in the Parliament whose main opponent is the Shia Hezbollah – prevents the election of a new President because they believe Parliamentary elections must be held first: “First is the demand to give priority to the parliamentary rather than presidential elections, right? In Lebanon, the president is elected indirectly. The Lebanese people do not elect the president directly, rather through parliamentary elections. They elect the parliament, which in turn elects the president. Therefore, the parliament is empowered by the people.” Other parties, such as the Hezbollah, refuse and want to stay in office until the end of their extended term. This issue, whose roots are multiple – political divisions, international pressure (to elect a president) with a divided support, internal pressure especially regarding the issue of Syrian refugees (who represent almost 20% of the Lebanese population) – lead to a political dead-end. Additionally, social issues that could be solved easily, such as the closure of a landfill, have disproportionate consequences, adding to the institutional paralysis.

Ultimately, this political failure fosters the lack of trust in institutions among Lebanese people. According to Transparency International, political parties are the institution most perceived to be affected by corruption within the country. On a more general level, 82% of the people believe corruption has increased since 2007-2010. Thus, as points out a blogger on L’Orient-Le Jour, the relation between the citizens and the state, which has long been one of distrust and suspicion, now needs to be redefined as people demand “a new political and social contract with their leaders, based on rights and duties.” This is the only possible peaceful and democratic exit to the garbage crisis, which is about much more now than its name suggests.