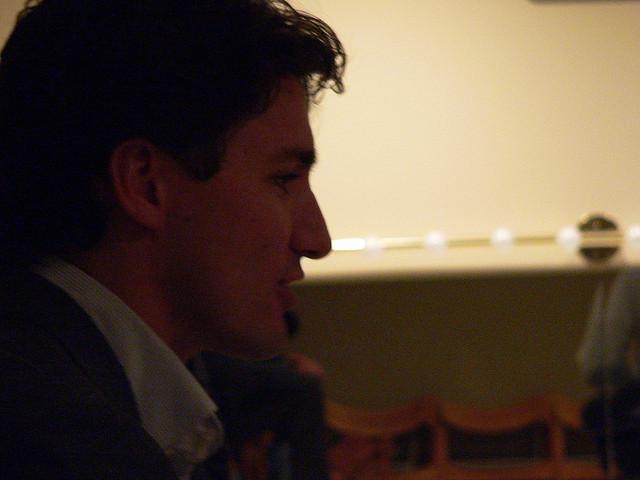 When it comes to the naïve-cynic political spectrum, I really try to sit right in the middle. No really, I do. I mean, yeah, there is a constant stream of power-hungry parasites that try to attack our democratic system daily, but if we all grab our trusty optimist aerosol cans we can collectively spray them away. Hurrah !

With that being said, Justin Trudeau’s latest move to remove 32 senators from the Liberal caucus is a complete ruse.

Once you’ve navigated through the talking points provided by the party, it’s clear that this move is an attempt to sidestep an oncoming train. You see, Michael Ferguson, Ottawa’s friendly neighborhood Auditor General (his beard is exquisite) is working on a comprehensive expense audit of all sitting senators. Oh nothing too special, just a sweeping historic examination of all housing, travel and office expenses by the determined bureaucrat who single-handedly dropped the F-35 fighter jet debacle in the government’s lap. He’s been extremely tight-lipped on the affair and trust me, it’s going to be fergalicious and most definitely make the MPs go loco.

Imagine this. The national Liberal Party caucus is going for a wintery stroll, bizarrely, down a train track. Frolicking and singing at their soaring popularity no seems to notice the oncoming train at their backs, except the wily JT and his ragtag gang of strategists. He whispers quietly to his fellow MPs to get off the track, knowing that his decaying Senatorial colleagues who have long since lost their hearing — in part from age, in part from all the sober second thinking business– won’t hear. The train barrels down the track, Trudeau warms his voice to sing the song of Senate reform, and the rest, as they say, is history.

So excuse my skepticism for Trudeau’s majestic altruism as he sidesteps what amounts to oncoming political train. Actually don’t excuse my skepticism, let’s turn it into aerosol form and go on a spraying frenzy. This is not about making the Senate free of partisanship. This is also not about mounting pressure on the Prime Minister or showing a commitment to Senate reform, though it does have these added bonuses. Albeit superficially. If it really was, why would the Liberals have voted against a motion explicitly proposing removing Senators from Caucus in October 2013?

In fact, Stephane Dion went as far to describe kicking senators out of caucus to be, “Well, ridiculous. It is certainly against the Constitution. We cannot say ‘You are a parliamentarian, but not the same as the ones in the House. You cannot be part of your caucus.’ This would change the character of the Senate, its relationship with the House and it would be a constitutional problem.”

After having merrily voted against it, I suppose a sheepish “oopsie daisy!” is in order.

Hypocrisy aside, Michael Ferguson’s Senate audit will be decisive. I firmly believe that now-former Liberal Senators, will be caught up in the crosshairs. It seems advisors in the Liberal Leader’s office have felt that as well, and hence, pulled the rug out from under their comrades in the other chamber. Once the audit bomb drops, it’ll be a relief to have established a safe distance from the contentious Senators in question. Think of it as an insurance policy in a way.

This whole thing has ‘hasty’ written all over it. The interim audit by Ferguson, including Senate leaders, deputy leaders, whips and members of the internal economy committee are set to release this week. The Canadian Press is also reporting that Senators were caught by complete surprise.

More importantly, it is difficult to believe that heavy hitters such as James Cowan, Jim Munson, Romeo Dallaire and others who hold considerable clout within the Liberal party would be so readily cast aside. Many of the now former senators have fundraised huge amounts of money for the party and played an important role during campaigns. As well, what of the three senators who were appointed by Justin’s father? Why would such strong and valuable political ties be cut so abruptly?

Yet once again, it’s quite surprising that Trudeau continues to make waves outside of the parliamentary process. While Mulcair huffs and puffs ‘prosecuting’ the PM, and while the PM flaunts his grand trade agreement to the interest of essentially no one, Trudeau continues to find traction through the media. A similar tactic was used when he declared his caucus would proactively disclose expenses this summer. It’s all a bit of a head scratcher. Is that all it takes today? A crafty statement ? A glossy PR move?

I guess I’m forgetting that we live in the age of the sound bite. In these strange times, the press release prevails.