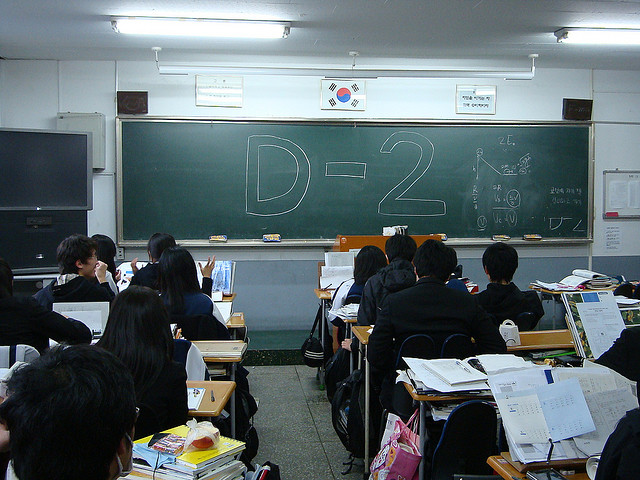 20% of children have once felt the pulse to run away from home and 10% have had suicidal thoughts: a shocking rate of 26% of the 10% have actually attempted suicide.[1][2] More than half the students between age fifteen and nineteen who are suicidal give “academic performance and college entrance” as the reason.[3]

Just in time for the annual College Scholastic Aptitude Test (CSAT) in November, Yonsei University released a reported that South Korea’s children are the least happy among twenty-seven OECD (Organization for Economic Co-operation and Development).[4] The study involved 6,791 children from age seven to eighteen, and the happiness survey formulated by UNICEF comprised six categories: material well-being, health and safety, education, behaviors and risks, housing and environment, and subjective happiness.[5][6] Korea has been, since 2009, placing last on the list for subjective happiness; this year, Korea scored 69.29 points against the OECD average of 100, and even the second last country Romania scored 16 points higher.[7] The health ministry of Korea claimed that “the most relevant factor to the children’s satisfaction is academic stress.”[8] Their unhappiness is not a short-term phenomenon that simply emerges during exam periods, but is a long-term effect of multiple influences such as the imbalance of academics with extracurricular activities, being constantly compared to their peers by parents and teachers, the pressure to compete, and lack of communication.

Unhappiness is strongly associated to deprivation, as South Korea does not only represent the unhappiest population of children but also has the highest child deprivation index of 54.8, which is 23 points higher than the second highest country Hungary.[9] Such a high deprivation index is due to lack of time committed to hobbies and sports. Only 34% exercise for thirty minutes at least three days per week and 31.2% never exercise; yet their subjective rating of health was the highest out of OECD countries at 97.2%, suggesting that schools do not appropriately emphasize the importance of physical fitness.[10] Even the minimal exercising that they do is to achieve high marks in their physical education class. One teacher ridiculed the parents for getting their children tutors “for jumping rope to prepare for their exams, leaving them no time to enjoy their teenage life.”[11] Her student Yoon, who got selected to play on a famous soccer team, got grounded from doing any soccer-related activities because his mom did not want him to “get hurt while doing useless activities.”[12]

China, who also focuses heavily on academics and has the best reading skills according to the 2012 PISA (Programme for International Student Assessment), had 39.1% of their children answer “yes” to the happiness survey.[13] South Korea has the second best readers, yet only 13% of their children answered “yes” to the same question.[14] Clearly, academic difficulty is not the only stress-inducing factor. Jaesuk, a middle school student, has frequent fights with his parents because he cannot “meet [their] expectations”, and even after the regular school hours plus five hours of private tutoring, his mom scolds him for taking a short break at home.[15] Seven out of ten students go to “hagwon” (private tutors), and a majority of them assert that they cannot concentrate but only go because their parents force them to go.[16] Professionals interpret that the word “anxiety” summarizes all issues with the Korean education policies, and tutoring advertisements exacerbate this anxiety by telling mothers that their kids will not be able to get accepted into a “college in Seoul” (schools that are considered prestigious) without registering for this special program or that updated workbook.[17] After hearing such stories, parents start comparing their kids to other kids. There is a reason why the terms “umchinah” and “umchinddal” are coined, meaning “my mom’s friend’s son” and “my mom’s friend’s daughter” who apparently study more, are smarter, and are “ahead.”

Notice how they are only compared to their moms’ friend’s kids; this is because they have nearly no interactions with their fathers. According to one study, the average amount of time teenagers converse with their fathers is 37 seconds per day.[18] Even the majority of their communication with their mothers is one-way demands, such as “study”, “eat”, or “stop playing games.”[19] Students also complain that the phrases they hear the most from their teachers is “be quiet” or “stop talking.”[20] Their worries and complaints accumulate inside until they are expressed in aggressive or passive behaviors. Parents then become troubled and send their children to see the psychologist, but frankly, they are paying money for disclosure to strangers when the kids can disclose, for free, to their family members. Students who cannot afford to visit counselors simply close themselves off from the world, naturally leading to detrimental computer and smart phone addictions, affecting 16.3% of the teenage population and an additional 24% at high risk.[21]

Studying. Better grades. Elite colleges. High-paid jobs. These are the values that the children are raised with. Especially in a collectivist culture, many components of happiness including self-esteem, self-confidence and self-worth are all determined in comparison to other people, distinguishing the nature of “subjective happiness” from that of other countries.[22] Teachers have a list of their students’ parents’ careers on their desks, and discriminate them based on their socioeconomic status starting elementary school. Teachers, acting as fortune-tellers, tell students who have lower grades that they will not get accepted to a prestigious college, make good money nor live a happy life. One mother expressed her frustration towards such a hope-crushing society, but argued that competition is unavoidable, and in a “country with so little land and so little resources, studying and earning high incomes is the only way to survive.”[23]

The scariest consequence of such profound unhappiness is the high depression and suicide rate. At a middle school in Gangnam, the most academically infamous district in Korea, 10% of grade seven students showed severe symptoms of depression including demotivation, pressing thoughts of self-worthlessness and uncertainty for the future.[24] The suicide rates mentioned at the beginning of the article are appalling, putting Korea at another #1, for suicides[25]. A couple of days ago, a student posted on Insight, a Korean social networking site, announcing that he will commit suicide if the school does not take liability for the invigilator’s phone vibrating during the listening section of the CSAT.[26] His frustration is understandable, and many grade 12 students in Korea probably relate to how upsetting that would be, but most people commented that he was overreacting. This hypersensitivity, however, is not his fault. It is the teachers, parents, private tutoring companies, and ultimately the society’s fault for indoctrinating the students that their lives are solely dependent on the result of the CSAT.

The UNICEF survey also revealed that children who choose family as the biggest contributor to happiness are generally happier than those who choose money as the biggest contributor.[27] Up to grade 4, family is the top reason for happiness, but this drastically decreases in high school and is replaced by money; this also means that happiness is negatively correlated to age and that the unhappiness will not just end with high school students.[28] The education ministry vaguely mentioned that they will improve the conditions for a “brighter future”, but has been promised since 2009, the first time these results came out.[29]

On January 10, an 18-year old student went missing in Kilis, Turkey.[30] He left to supposedly visit his friend, Hassan, but investigators suggest that he went to join the Islamic State. His computer history showed “Turkey”, “Syria”, “Islam” and other associated words were searched 517 times in the past year, and his Twitter and Facebook accounts had traces of conversations he had with IS members about his desire to join and instructions on how he can come in contact with them.[31] His location and his purpose for the trip are still undetermined, but along with him, the parents in Korea are also worried about “Kim imitation syndrome.”[32] As soon as the media reported Kim’s story, the number of his followers on Twitter increased from 70 to 445.[33] Many requested to join the IS, and one student posted, “I am a 16-year old male. I hate this world. Society wants me to act but I don’t know how. How can I join?”[34] The IS also portrays their organization as a “paradise” on social networking sites, promising “free housing, free utilities, free food, free health care, and no taxation.”[35] Criminologists and psychologists explain that many Korean adolescents who are mentally stressed out and exhausted may exploit this as an opportunity to “avoid reality” and “become a hero.”[36] Even Kim’s last post on Facebook said: “I want to leave this country and my family. I just want to live a new life.”[37]

College admission results were released in January and February, and many students are in despair of having to spend another year preparing for the CSAT and reapplying to their dream schools with a “score” that is acceptable. All of them are susceptible, not only to joining the IS but also to Internet addiction, substance abuse and even suicide. Every society its own education policies and ideologies, and some even praise South Korea’s, but if so many students are unhappy about their lives, something must change.