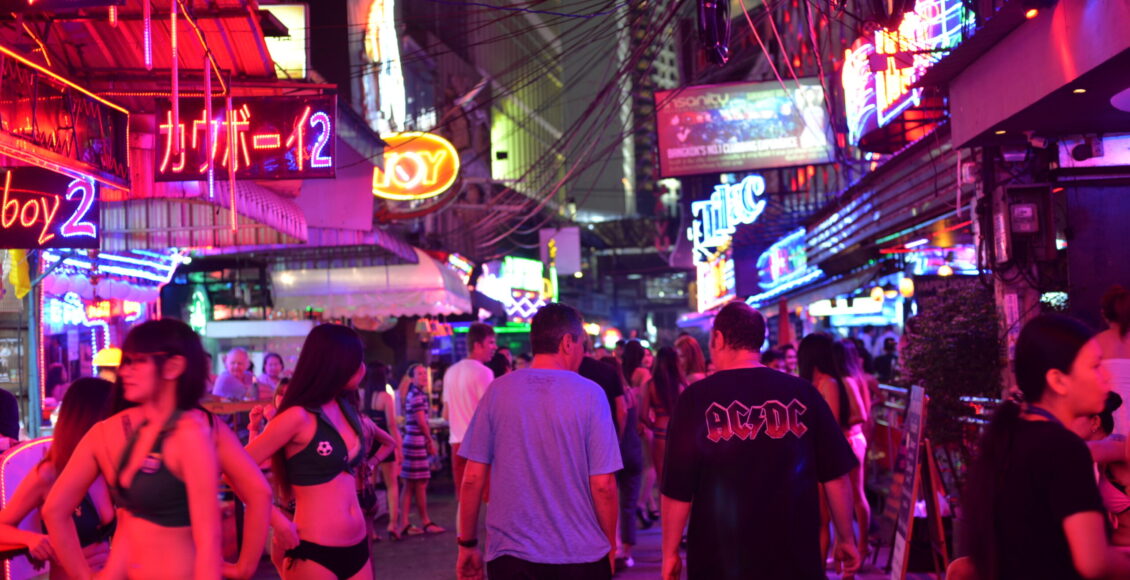 Walking home from school, it’s sunny, hot, and sticky. I wind through the streets of Bangkok, dodging motorbike taxis, passing food carts, and, of course, avoiding the bright and colourful tuk-tuks. I turn onto my street and am met with the hoots and hollers from the infamous Soi Cowboy, a street buzzing with brothels and lively backpackers. Yet, what lies beneath the surface of the bustling energy of the city are the dark secrets behind Thailand’s booming tourism industry.

Sex work has a profound history in the country, dating back to the mid-1300s. However, it wasn’t really until the Japanese occupation in World War 2 and the abundance of US military bases in the area during the Vietnam War that things really took off. Soldiers would come to Bangkok for their ‘rest and recuperation,’ which involved making numerous trips to the brothels of one of the many red-light district streets, dubbed ‘Soi Cowboy.’ This, combined with the government investing vast amounts of money into the tourism industry, and the rising rates of urban migration during the 1970s, created a perfect storm for the country’s sex industry to thrive. Such an industry is indicative of larger problems at hand, namely the failure to acknowledge the systematic disadvantages rural communities face and the clear violations of civil rights taking place in the region. Although this is something that is not usually talked about, it is hidden in plain sight throughout the country.

Sex slavery is nowhere and everywhere in Thailand. Young Thai women walk hand-in-hand with elderly white men, unmarked vans are frequently found parked on the streets, and “happy-ending” masseuses screech to men on the street – all things that are painted as part of the city’s character. Women, girls, and sometimes boys are targeted from rural parts of the country, luring them with employment opportunities in the ‘big city’ to help them find careers. Drivers pick up their victims in groups from their villages under the false pretext that they leave home for bigger opportunities and are eventually sold as sex slaves once they reach Bangkok. This is not to mention the nation’s optimal geographical position in the ‘golden triangle,’ a global hotspot for illegal trade between Thailand, Myanmar, and Laos. Such a position means that vulnerable minority groups are at high risk of falling into mafia groups, drug gangs, or being traded abroad as slaves. Furthermore, human trafficking in the area goes hand in hand with all types of organized crime, such as drug and animal trafficking, as well as money laundering. This story goes deeper than just the Thai government seeking revenue from its tourism industry: it is a system of loopholes that exist to ensure those who are born into poverty stay in poverty.

Though the core-periphery model is universal, it is ever present in the domestic economy of Thailand. The core-periphery model is a theory that is used to describe the phenomenon of capital centres exploiting rural or peripheral, areas for their labour, and it can be witnessed on both global and state levels. According to Barabara Weightman, this leads to large cities undergoing vast amounts of growth while rural, less populated areas remain poor, and the people are underprivileged. Such a phenomenon has meant increased desperation for access to vital resources such as education, healthcare, and adequate food supply. Rural areas in Thailand lack critical infrastructure, which results in uneducated and jobless citizens. Such circumstances build what the sex industry relies upon; desperate people who fall for false means of employment.

Where does the solution lie? The simple answer is a crackdown in combating organized crime. Though the nation has made multiple attempts at a solution, it is still ranked as Tier 2 on the United States human trafficking watch list. There has been an increase in the presence of help centres and the introduction of stronger penalties for those who are caught. Unfortunately, police corruption makes increasing punishment an insufficient solution. Police bribes are extremely common, which has meant an overall decrease in the pressure that police presence places on the industry. Additionally, the exclusion of immigrants and sex workers in the decision-making process, according to Sara McGeough of Mercyhurst University, plays a large role in why solutions have not yet been found. Still, some NGOs help to spread awareness, rescue survivors, and use the strong power of social media to their advantage. Apps have been developed such as ‘Protect-U,’ an information-based resource that spreads awareness of victims’ rights and allows them to find shelters more easily. Although, constant fear of prosecution from the government places a large obstacle in the way of victims taking the risk of getting help.

Living in the country during my teens, I have experienced Bangkok for all it has to offer. Whether it be my friends commonly being mistaken for being their dad’s girlfriend, getting cut off by fancy sports cars as I cross the road to be met with the beggars on the streets, or even my brother coming home distressed after being groped by a masseuse, the extent of sex trafficking and inequality in the country is clear. A solution will only be in sight once police reform is taken seriously and efforts are made to stop the poverty traps inherent to the economics of sex trafficking.

Featured image by “Paul Sullivan” is licensed under CC BY-ND 2.0.

Maisie Wynd Smith is a second year student double majoring in International Development Studies and Geography. Her areas of interest include international relations, social justice, and Asia-Pacific economics and politics.