Karama has No Walls: An Interview with Sara Ishaq 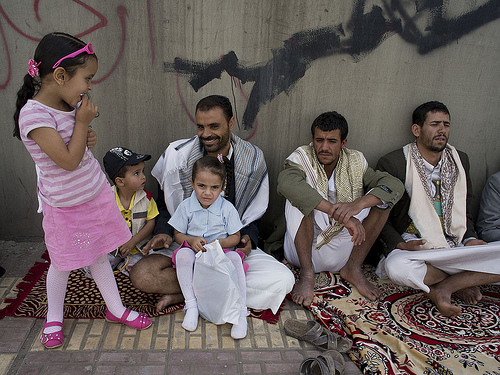 Karama has No Walls was recently nominated for this year’s Oscar in the category Documentary Short. It is a tragic film that gets to the heart of Yemen’s revolution, covering its watershed moment: the Friday of Dignity, 18 March 2011. On this day 45 protesters, three of them children, were massacred in Sana’a while assembling on the streets peacefully.

Sara Ishaq is the film’s director.

How did you yourself experience the Friday of Dignity?

I experienced the day from home. I had been to the square many times over the weeks leading up to the Friday of Karama (Dignity) to film and take part in protests, however on that particular day, I stayed at home to film my family. At the time, I was in the middle of making another film which is now called ‘The Mulberry House’, which is about my family, the social dynamics and culture in a Yemeni household, and how they responded to the revolution themselves.

The day before that fateful Friday, however, I was in the square and I saw the wall that was built in the middle of the road which I was meant to cross. I was very perplexed and didn’t understand why it was there. I asked people at the Square, but no one seemed to know. By that time, though, there were rumors spreading that violence or an attack of some kind would take place on Friday. As a result, my family decided it was too dangerous to attend Friday prayers at the Square and persuaded me not to go either.

When the attack happened, my family and I stood, transfixed, in front of the TV, and then we rushed to donate blood and see if we could offer a helping hand at the field hospital. But the chaos that followed the attacks made our efforts to help futile.. This day changed the way people perceived the revolution. It was a very moving day for everybody.

So the walls were built over night?

Yes, over the course of two or three days prior to the massacre. Walls were being built everywhere, some said that the people in the neighborhood built them as they didn’t want the protests to expand and so tried to keep them limited to a very small area. Those were the naïve speculations we all had.

In the film itself you followed the stories of Saleem and Anwar, two children. You interviewed their fathers Ghalib and Abdulwahid. Was that an attempt to document the impact on a more individual level?

The reason I focused on individuals and personal stories was because I knew how easy it was to become desensitized by watching criminal acts. It doesn’t matter how barbaric the images are: you might respond to them  emotionally once or twice, but when we see images of violence and killing on the news all the time…we often detach ourselves and gradually become desensitized. We do this as a method of self-preservation. There is only so much violence you can see, empathize with, and feel emotional towards before you shut it all out mentally.

What was really painful about this massacre was that people started ‘shutting it out’ around me very fast. Some did so out of shock, others out of pain, others out of hopelessness or helplessness, and many did so out of denial. I found that very few people knew about the sequence of events that took place on the day. How many people were actually killed or injured, who they were and how their lives had been irrevocably shattered, and who the killers were.

I had a personal connection with the event, too. A few of my cousins and aunts were in the square, as were some of my journalist and activist friends. Luckily none of them were harmed, but it was a close enough call for me to be strongly affected by it. Someone else’s father or brother could have easily been my father or brother, had we decided to attend the Friday prayers that particular Friday as we had done so on previous Friday prayers at the Square.

Therefore, I felt I needed to tell the story from a personal angle, through the stories of the people who were directly impacted – to look into their eyes and be placed in their shoes for a moment. I wanted to make the story tangible and real, and to make it a universal story that anybody, anywhere could watch and relate to the pain beyond cultural or politic boundaries.

The whole point is that civilians assembled for prayer with their families and children, unarmed in a heavily armed country…and peacefully asked for former president Ali Abdullah Saleh to step down. As a result, they were killed in cold blood. When I met the people who later featured in the film, I was astounded by their bravery and determination. I wanted to put that human element across to the world, and not just focus on the attacks.

And now ‘Karama has no Walls’ is nominated for this year’s Oscar in the category Short Documentary. How does that make you feel?

Of course, when my team and I heard about the nomination, we were extremely overjoyed, and we feel deeply honoured by this recognition – this is indeed beyond our wildest dreams. Had somebody predicted a few years ago that my first film would be nominated for an Oscar – or shortlisted, or even considered – I would never have believed it to be in the realm of possibility.

But then, had somebody said to me that there would be a revolution in Yemen too, during which 50+ young people would be killed in a manner beyond imagination and that I would make a film about it…I would have thought they were utterly insane. None of what has happened over the past 3 years has really sunk in yet, or been within the ‘realms of possibility’ and it has taken this long for us to realize that really, anything is possible.

As honoured and happy as we are about this nomination, there is also an overwhelming feeling of sadness that still fills our hearts and that we carry with us wherever we take this film. We set out to make a film to raise awareness about the cause of the young men who fell on Karama Friday, and to remind people of the reasons for which they dedicated their lives.

We wanted to keep their memory alive, so that Yemenis continue to push for answers for the many unanswered questions surrounding the case. To also push for a proper investigation into the case, for victim’s families and wounded to receive compensation for their losses. Criminals have yet to be tried and punished, and high-ranking suspects have not even been called in for questioning.

That modest mission that we had to simply bring the case back to the surface for Yemen, accelerated to the point where the whole world is now listening, watching, reading and talking about it. This alone is what makes the nomination important and an honour. Nothing we can do will bring back those who fell on Karama Friday, but a nomination like this – the first of its kind in Yemen – will serve to immortalize the memory of those young men and their fight.

Their voices are being heard and their lives commemorated. This recognition also reinforces the fight for human rights and the demands of the revolution. It has given Yemen a boost on so many levels, something to feel happy about for the first time over the past three years. So yes, we feel extremely happy for what this means for the film and our cause, but it is a poignant happiness born out of devastating circumstances nonetheless.“

So on a more general level: you are the first Yemeni to be nominated for an Oscar. Moreover, this year there is the first Egyptian nomination for ‘The Square’ in the category Documentary Feature as well, and ‘Return to Homs’ has just won an award at Sundance. Would you say that those artistic takes on the recent wave of protests give the people recognition, give them a voice internationally?

“My film, ‘Return to Homs’ and ‘The Square’ are made by regular people, about other regular people who took to the streets and tried to make a difference; to change the world – at least their world – for the better. I think there is something very positive and inspiring about these stories because people can connect with them on a very basic, human level. Everyone wants freedom, everyone wants rights, everyone wants to have a voice and be heard.

We all had almost simultaneous revolutions in three different countries…and yet we were all connected by our common experiences and struggles against oppressive regimes. The hope and inspiration that the revolutions exuded – in the early days at least – and the euphoria that accompanied them was felt everywhere. Those moments were moments that people felt that the future held better things for us in the Arab world. These films preserve fragments of those moments of hope and inspiration, but also serve to shed light on the chaos that ensued and the dire circumstances our countries and people are currently living under.

The fact that three Arab films are nominated for an Oscar this year (four if we count Jeremy Scahill’s film ‘Dirty Wars’ which also focuses on Yemen) – in itself is historical and it says a lot about the changing perception of the Arab World and that the films emerging from the region are of high-caliber and worthy of being represented and celebrated internationally. That is a very positive thing that came out of a very negative situation.

The interview was first published via YourMiddleEast.com.

Benedikt is a graduate student of Middle Eastern Studies and Political Science and a Junior Member at NISIS.